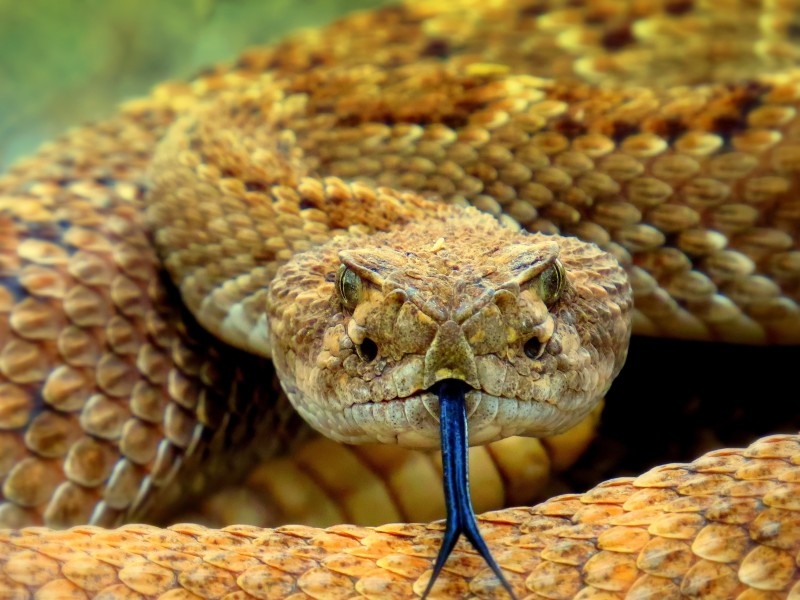 This corner of the world is a downright doozy for real adventurers. From the bucket-list Inca Trail in Peru to the great glaciers of Argentine Patagonia, the glistening surf beaches of Brazil to the wetlands of Paraguay, there’s loads to get through. But there are some critters you should watch out for when you come…like the most dangerous snakes in South America.

That’s what this guide is all about. It runs through seven of the species that we think every traveler to the land of empanadas and tango dancing needs to keep their eye out for, and it makes for some slightly disconcerting reading.

Yep, there are nasty pit vipers that can kill a human in a matter of hours next to dazzling tree snakes that can strike fast next to colossal boas that are able to squeeze their prey to death. They live all over the region, from the Andean mountains to the tropical forests of the Amazon. Let’s begin…

The feared fer-de-lance is up there with the most troublesome snakes on the whole planet. It’s known invariably as the bothrops or, more commonly in Latin America, the terciopelo, and has a range that stretches all the way through the heart of Central America, from the tropical southern reaches of Mexico all the way to the top of the Andes mountains in Colombia, Venezuela, and Ecuador.

The critter can grow to a mammoth 2.5 meters at full adulthood, which places it firmly among the three largest pit vipers in the world. It backs up the beefy size with a massively defensive and aggressive temperament and one of the largest fang-to-body ratios of any creature, anywhere! If that sounds like bad news on the venom front, then that’s because it is. Fer-de-lance vipers are responsible for the most fatal snakebites in their range, killing something near 10% of all human victims.

Perhaps the most telling physical feature of the bothrops is the shape of the head. Like all vipers, it’s large and diamond-like, with two protruding cheeks that come to a distinct nose that’s almost turned up right at the end. The coloring of these bad boys is generally brownish black with alternating triangles running down to the end of the tail.

Eyelash vipers might look pretty but you probably don’t want to get very near. This arboreal palm-pitviper is a tree-dwelling menace, possessing a strong venom and a fast bite. Those that do fall victim to one of its attacks can expect to experience immense pain at the site of contact with the fangs, followed by breathing complications and heart rate fluctuations. Death is rare, but does occur.

There’s no getting around the fact that the eyelash viper is one seriously striking snake. Just as the name implies, they have a series of amazing spiked scales looming over the eyes, which form together to give the appearance of long human eyelashes. Couple that with an incredible color scheme – think mustard yellow the whole way down the body – and you start to see why these are such a popular pet snake among enthusiasts, despite the fact they are deadly!

The eyelash viper is 100% up there with the most dangerous snakes in South America, but it actually only lives in a small part of the continent. The center of its range is in Central America, where it lives all throughout the primeval rainforests of Panama and in the coastal forests of Costa Rica. In South America, it mainly lives in key parts of northern Colombia and Venezuela.

The beasty bushmaster of the south makes its home in the hot and humid equatorial forests that cover huge parts of Ecuador, Peru, and Brazil, but also extends along the northern fringes of the continent as far as Suriname and Brazil. You might also find them out on the Caribbean islands of Trinidad and Tobago.

It’s a feared snake largely because the nature of its venom remains a bit of a mystery. Some say it’s powerful enough to be on par with the formidable fer-de-lance. Others say it’s not quite that bad. However, the fact is that the South American bushmaster has killed humans in the past, so they’re certainly one to watch.

These are a relatively long viper, growing to over two meters at full adulthood. They have a noticeable rounded neck and a small snout, with a camo pattern that alternates between light yellows and browns the whole way along.

The critically endangered golden lancehead is both one of the most dangerous snakes in South America, and one of the rarest. Today, it only resides in the wooded coastal hills of the small Ilha da Queimada Grande, which sits in the Atlantic Ocean just off the state of State of São Paulo in southwestern Brazil. (They actually call that one Snake Island, since it’s thought to have one of the highest counts of snakes of any place in the world. Keep away ophidiophobes!)

The species lives up to its name thanks to a pale, golden back coloring and underbelly, all of which comes to a point at the end of the nose, which resembles a lance or a peak. They like to live in moist forest and lowland forest areas, but will also venture to rocky outcrops and meadows to hunt for prey.

Given how rare these guys are, it’s only natural that there aren’t all that many human envenomations. Of the ones that have occurred, experts can discern a startling mortality rate of around 5%. And it’s thought that those deaths are pretty darn gnarly, starting with uncontrolled vomiting and developing into severe blood blisters and skin rashes.

Carrying the flag for the rattlesnakes of the Americas down south of the US border, the South American rattlesnake is a pit viper that’s surely got a place among the most dangerous snakes on the continent. Bites can cause disconcerting sensory failures, from loss of hearing to loss of sense of touch, eventually leading to respiratory paralysis and death.

You’ll find the South American rattlesnake in a diverse range of places, from the cloud forests of eastern Peru all the way to the table-top tepui peaks of Guyana, from the southern Amazonian forests to the plains of northern Argentina.

You’re looking for a rather beefy snake that’s thick-set in the middle of the body, with a narrow head and an even narrower tail. The coloring tends to be dark, inky blacks, with patterns of tan and light brown picked out along the underside. They also have that trademark rattler, which they’ll use to warn off potential victims before striking.

The Jararaca is one of the rare deadly snakes that actually lives further south than the Amazon Rainforest. You’ll find this one residing right in the heart of the continent, from the rolling wetlands of southern Brazil all the way down to the pampas of northern Argentina.

Often confused with the fer-de-lance, Bothrops jararaca tend to grow up to 1.5 meters in total and have a color scheme that alternates between light browns, beiges, and greys. They have the pointed snout common to many pit vipers and darker scales rounding off the base of the head.

Venom from Jararaca snakes has been instrumental in the development of some human drugs, including successful treatments for high blood pressure. Sadly, it’s not helpful at all when injected in the wild, when it causes paralysis of limbs and radiating pain. These guys bite more people in their range than any other species, counting around 3,400 victims per year in Brazil alone!

And so we come to the only snake on this list of the most dangerous snakes in South America that doesn’t pose a threat on account of its venom, but rather because it’s a constrictor. That means it squeezes would-be prey to death and then swallows the whole thing down in one big gulp, digesting it over a series of months. Thing is, we humans aren’t immune to this gruesome end – the reticulated python, another boa snake that lives in Southeast Asia – has been known to kill adult men and women in its time!

But back to the giant emerald anaconda. This is the largest and heaviest known snake on the planet. Estimations of the largest specimens ever recorded verge on the ridiculous – one was measured at over 7.9 meters in all, weighing in at nearly 200kg! That said, most tend to grow to around four or five meters.

The Eunectes murinus is a snake of the Amazon Rainforest. That means it lives in huge parts of eastern and central Brazil, but also crosses into the foothills of the eastern Andes in Peru, Colombia, and Venezuela. You can tell them apart for their distinct greenish color and patterning – if you can spot them in the woods, that is!

The most dangerous snakes in South America – our conclusion

There are plenty of serpents that could make it onto this list of the most dangerous snakes in South America. This is a continent covered with wild rainforests and rare cloud forests, after all. It’s one of the most biodiverse places on Earth, and that means you’ll encounter everything from strange mustard-colored vipers to massive boa constrictors.