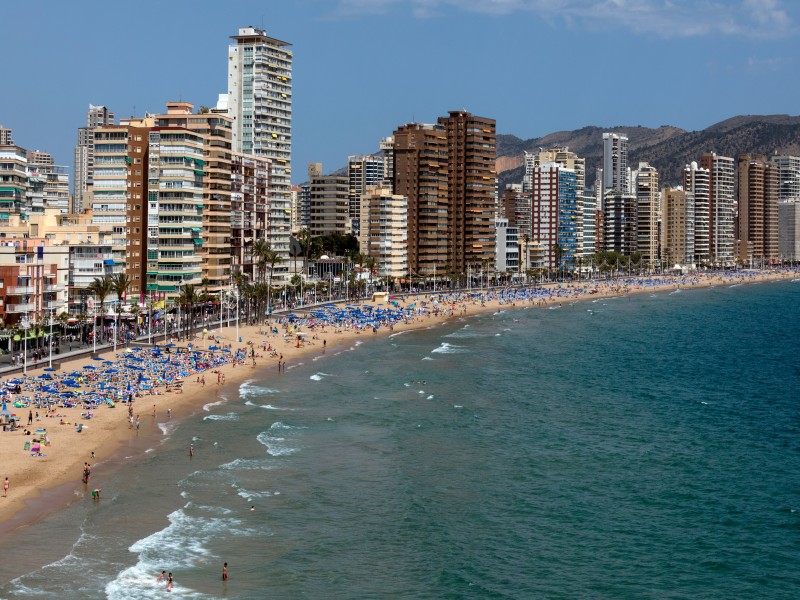 Warmest Places in Spain: 7 of the Hottest Cities in Spain

Think of Spain and sun, sand, and sangria all come to mind. Though there’s much more to Spain than that, the beautiful climate sure is a major draw for many visitors. In fact the warmest places in Spain are amongst the hottest parts of Europe.

Yet Spain has a much more varied climate than many people might realize. The north of the country sees a fair amount of rain and relatively mild high temperatures even in summer. Yet in the warmest places in Spain, temperatures regularly soar over 30 °C, and extreme highs can even climb into the 40 °Cs. As a general rule the hottest parts of Spain are located in the south of the country in the regions of Andalusia and Murcia.

Slap on some sunscreen and be sure to stay hydrated as we take a sweltering tour of seven of the hottest places in Spain.

Most people would probably struggle to point out the small city of Montoro on a map of Spain. Home to just under 10,000 people, Montoro is about an hour’s drive from Seville and Malaga, located in the north of Andalusia. Situated overlooking the Guadalquivir River, Montoro is a pretty and historic city with roots stretching back to the Roman times. Montoro is also officially the warmest place in Spain.

Murcia is the largest city in the region of Murcia, of which it is also the capital. The region of Murcia lies just to the east of Andalusia in the south of the country and is one of the warmest places in Spain. Sitting to the south and slightly inland from well-known tourist hotspots such as Benidorm and Alicante, Murcia is the seventh largest city in Spain and dates back to the 9th century. The city also boasts a very warm climate, particularly in the summer.

Back in Andalusia, the historic city of Seville is easily one of the warmest places in Spain. With an annual average temperature of 25.4 °C, Seville is one of the sunniest and hottest cities in Europe. Located inland and away from the cooling seas, Seville absolutely scorches during the city’s long hot summers, which last from May to October.

The average daily maximum temperatures in Seville during the peak of summer are just over 36 °C and you can expect eleven to twelve hours of constant sunshine a day. The highest official temperature ever recorded in Seville is 46.6 °C, and temperatures above 40 °C are not uncommon. There have even been unofficial reports of temperatures hitting as high as 50 °C as far back as 1881, though the method of recording temperatures at the time means that this can’t be verified.

Perhaps unsurprisingly, the city of Cordoba – just a couple of hour’s drive to the east of Seville – is also one of the warmest places in Spain. Also located inland and hidden from the cooling effect of the coastline, Cordoba shares a very similar climate to Seville. In fact, Cordoba could even claim to be slightly warmer than Seville. Average daily highs in the summer months in Cordoba nudge 37 °C and the city is regularly one of the warmest in all of Europe.

Summer in Cordoba runs from late May to mid-October and they are usually sweltering. During July and August the average daily temperature is 28 °C, whilst the average high is typically around 36 °C. Days where the temperature tops 40 °C are common in the height of summer too, though nighttime temperatures tend to be much cooler even on the hottest of days. The highest temperature ever recorded in Cordoba is 46.9 °C.

Staying in Andalusia, the city of Malaga is next on our list of the hottest places in Spain. As with Seville, Malaga enjoys comparatively warm winters but the temperatures ratchets up during the long and sweaty summer. Situated on the Costa del Sol and overlooking the Mediterranean Sea, Malaga is a major tourist destination in its own right, whilst also close to many famous holiday destinations, such as Torremolinos and Marbella.

Like most of southern Spain, Malaga’s summers are sizzling. From June to September the daily average temperature in Malaga is over 23 °C, reaching as high as 26 °C by August. The actual highs are often even hotter again, with the maximum temperatures typically hitting 32 °C. Don’t be surprised to see the temperatures soar into the low 40s °C either, especially around June and September. In fact, winters in Malaga are amongst the warmest in Europe too. The average daily temperature in Malaga between December and February is around 17 °C.

Granada is the last Andalusian city on our tour around the warmest places in Spain. As with Seville and Cordoba, this gorgeous historic city is located inland and away from the cooling influence of the sea. This means that temperatures creep up and up during the summer, often peaking at around 40 °C. Whilst winters in Granada are cool and often see a surprising amount of rainfall, in the summer Granada gets toasty hot.

The final city on our list of the warmest places in Spain takes us north to Zaragoza. Though perhaps not as famous for its inclement weather as other parts of Spain, Zaragoza can get incredibly hot during the summer. Located in the region of Aragon and around 200 miles inland from Barcelona, summers in Zaragoza are famously dry, see a lot of sunshine as well as some gloriously hot weather.

What is the hottest town in Spain?

The hottest town in Spain is Montoro which has twice set the record for the highest temperature ever recorded in the entire country. This small Andalusian city has twice recorded temperatures of just over 47 °C in the space of five years.

Which part of Spain is the warmest in winter?

Where in Spain is warm all year round?

The cities and towns of Andalusia are typically warm all year round. Cities such as Seville and Malaga enjoy incredibly hot summers and mild but warm winters. In winter daytime temperatures in cities such as Seville and Malaga are usually between 16 -18 °C and most days are sunny for long periods. Some cities that lie further from the coast, such as Cordoba, enjoy hot summers but can be much cooler during the winter.