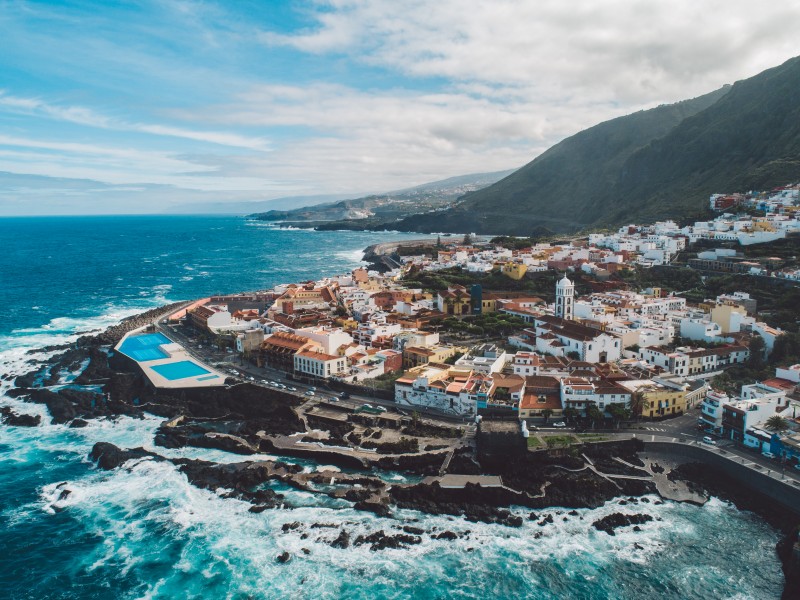 Tenerife Or Lanzarote? Deciding Between The Canaries

If you can’t pick between Tenerife or Lanzarote, then let us do the legwork for you. Here, we delve into seven key aspects of the islands to uncover where’s best for your trip this year. We’ll focus on both the similarities and the differences of each place to help you make an informed choice about which sun-kissed Canary is best.

Both places are understandably pretty darn popular with the holidaying crowd. But they’re not the same. Lanzarote is famed for its Mars-like backcountry and volcanic lava fields, its rugged coast, and black-sand beaches. Meanwhile, Tenerife is probably best known for its vibrant southern resort towns and the soaring mountain peaks of the Teide National Park.

One thing we can say for sure is that you’re going to have a good time no matter where you pick. There are long runs of beachfront to laze on, surf breaks aplenty, and oodles of hotels and villas to suit all budgets and travelers. Either way, let’s see what sets these isles apart…

Tenerife or Lanzarote for ease of travel?

Let’s face it – there’s only really one viable way to get to any of the Canary Islands: Flying. Yep, short of catching a crazy-long ferry from either Morocco or the Spanish mainland, you’re going to need to board a plane to reach both these places. The good news? They each have their own airports, along with plenty of flight links to EU countries and beyond.

Lanzarote’s airport is just west of the island’s capital of Arrecife. That puts it neatly on the main east-coast highway (the only real highway on Lanzarote), within easy touching distance of popular resorts like Playa Honda and Costa Teguise. Officially called the César Manrique-Lanzarote Airport after one of the island’s own great artists, it receives flights from loads of big cities in Europe. There’s a particularly high number of services with Ryanair, TUI, and easyJet, with extra seasonal links that run November-March most years.

Tenerife just about trumps that because it has not just one, but two airports. They are conveniently named – one Tenerife South, one Tenerife North – and offer access to different sides of the island. Tenerife South is the larger of the two (serving 11 million passengers). It handles services on Ryanair and easyJet but also lots of flag-carriers like Lufthansa and BA. Tenerife North is more budget-focused and has lots of seasonal routes, but is better for reaching Santa Cruz de Tenerife, although there’s a fantastic motorway that runs almost a complete 360 loop around the island for good access to all the towns and resorts.

Winner: Tenerife – it’s got two airports to Lanzarote’s one.

Tenerife or Lanzarote for general vibe?

Tenerife and Lanzarote actually follow a pretty similar pattern when it comes to atmosphere and vibe. These islands are islands of two halves. They each have a built-up, popular resort side to the south and east, matched and balanced by a less-trodden north and west coast that’s more vogue with independent travelers and adventurers.

In Lanzarote, the likes of Playa Blanca and Costa Teguise tick all the boxes for a proper package trip. They have chain hotels with swimming pools, loads of international bars, and eateries that serve a wide range of non-Spanish and Spanish food (it’s just as easy to get a Full English fry up as patatas bravas!). That changes considerably as you hop inland and to the north. Up there, Caleta de Famara is an upcoming surf town with board rentals and a younger crowd. Then there are the rustic Canarian towns of Haria and Ye, where you can escape the tourist bunch and enjoy something more local.

The resorts of Tenerife are all clustered around a large bend on the south coast. They start with Costa Adeje in the west and don’t really end until you get to El Medano in the east. Between them, the likes of Los Cristianos and Playa de las Americas are legendary in the world of family holidaying and hedonism – they offer big beaches with sunbeds and a nightlife strip to boot. There are some places in the north of the island that are simply incomparable to that – just check out the wild mountains of the Rural de Anaga Park or the vibrant walks of Santa Cruz, which often seems more South American than Spanish it’s that full of character.

Tenerife or Lanzarote for things to do?

If you’re not the sort of vacationer to simply throw down the towel and laze your whole trip away, then don’t worry – there are loads of things to keep you busy on both Tenerife and Lanzarote. On the latter, there’s a fascinating backcountry only 10-20 minutes’ drive out from the south and east coast beaches. In fact, cruising around is a joy in itself, as you’ll get visions of the Timanfaya National Park and can venture to the lookout points of the Risco Cliffs. There’s also an enthralling cactus garden in Guatiza (for the botanists), the Cesar Manrique House Museum (for the art lovers), and epic surf in Caleta (for all levels).

Tenerife can do shopping a bit better than Lanzarote. It comes up trumps with the Oasis Shopping Center and arcades of Playa de las Americas, along with the craft stores of Santa Cruz in the north. There’s also a fantastic array of natural attractions which we’ll unravel better later on –suffice to say that the Los Gigantes Cliffs and Teide National Park are musts for explorers. Families might prefer the whizzing slides of Aqualand Costa Adeje or the oriental-themed wave pools of the big Siam Park, but culture seekers are likely to love the quaint hill towns around Las Lagunetas and La Esperanza a bit more.

Winner: Draw. There’s enough to fill weeks of holidaying in both destinations.

Tenerife or Lanzarote for hotels?

Hotels are everywhere in these two. Yep, you get a whopping great big proportion of places to stay in Lanzarote and Tenerife precisely because these isles are so popular with holidaymakers. If we had to narrow it down, we’d say that Lanza has more off-the-beaten-track cottages and villas for families. That’s largely because less of its inland sits within protected national parks. However, the island also offers wave-sprayed surf lodges on the north shore and some true family resorts by Playa Blanca and the like. Some of our top picks would be:

Tenerife has arguably the finest array of seaside resorts for couples and families in the whole of Spain. The south tip of the island is basically given over completely to built-up resort hotels. Most offer their own pools, international breakfast buffets, sprawling gardens with sunbeds, and easy access to the beaches. You can also track inland to get rustic homes under the gaze of the great volcanos and even yoga studios or vineyard stays further into the northern hills. Our top picks would include:

Tenerife or Lanzarote for beaches?

Lanzarote’s beaches are a bit of an acquired taste. That’s not to say they’re bad. They most certainly are not! It’s just that they’re wilder, more rugged, less quintessentially Spanish than other members of the Canaries can offer. We’d say the crème-de-le-crème of them lie on the far south-western tip of the isle. There, the Papagayo National Park is a turtle-swimming mecca of pink-tinged beaches that’s hard not to love. We also have a soft spot for Caleta up north (mainly thanks to its five kilometers of surfable shoreline) and virtually deserted Risco Beach (with its views of La Graciosa Island across the strait).

The top beaches on Tenerife are widely considered to lurk around the southern coastline. There, you actually get manmade beaches or organized beaches that cater purposefully to travel makers. We’re talking the likes of Playa de Las Vistas, Playa Las Galletas, and the ever-rammed Playa de las Americas. To be honest, we always say true beach lovers should escape those. Up north are the gems; the black-sand, cliff-backed gems. Why not start with Playa Bollullo, Playa de los Gigantes, and Playa de Arenal and go from there?

Winner: Tenerife. But Lanzarote isn’t bad at all!

Tenerife or Lanzarote for nightlife?

You’re not going to starve for nightlife on either of these islands. However, there’s one that’s much more hedonistic than the other: Tenerife. Yep, the westernmost of the islands wins out here thanks to the thumping resort towns of the south coast. They include a strip in Playa de las Americas that can rival the likes of Malia and Aiya Napa for that all-night shindigging. But it’s not just that. The capital of Santa Cruz offers a rambunctious carnival in the springtime that has glitzy dance parades and Latin music aplenty – don’t ignore that if you happen to be around!

Lanzarote’s top nightlife spots are shared between Arrecife and Puerto del Carmen. The latter has lots of expat bars and English pubs, but also a few rollicking discos that go all night long. The capital of the island is more local and is fast becoming quite hipster, offering craft beer outlets and London-style café-bars. You can also get lots of nightlife in Playa Blanca and Costa Teguise, though it’s a touch more family orientated.

Tenerife or Lanzarote for nature?

The natural side of these isles is becoming an increasingly big draw. In fact, we’d say both Lanzarote and Tenerife have soared in popularity among adventure-seeking younger backpackers in recent years. It’s almost as if their eye-watering mountains and coastlines were obscured by the resort towns and only just entered the mainstream.

Lanzarote has one or two absolutely beautiful spots. There’s a zig-zagging hiking path that can take you up a wide valley behind the Risco Cliffs to a lookout point gazing across the Atlantic Ocean. A strange array of alien-like flora and a great observatory await at the top. Then there’s the duo of the Los Volcanes Natural Park and Timanfaya National Park. They are where Lanzarote turns into something out of the outer solar system. It’s all brown-paper hills and smoke-belching fumaroles and lava fields.

Tenerife matches that with its epic Teide National Park. That’s anchored on the highest mountain in all of Spain (Mount Teide at 3,718 meters above sea level). Hiking paths abound in those parts, taking you through strange meadows of pinkish wildflowers and rocky landscapes inhabited by Southern Tenerife lizards. There’s also loads of adjoining hiking areas, like Las Fuentes to the south and the pine-scented hills of Las Lagunetas to the north. You’ll need a permit to conquer Teide itself, though the view is worth paying for!

Winner: Tenerife, thanks to the highest point in Spain!

It’s super-tricky to decide between Tenerife and Lanzarote. They’re both such different Canaries but also share lots of similarities. We’d probably say that Tenerife wins out for family trips and adventure travelers, unless you’re keen on learning to surf, when Lanzarote is the better choice. You’ll find lovely beaches on both islands, and plenty of hotels of all shapes and sizes to go around, too. Lanza might be better for older retiree travelers and culture buffs, though.