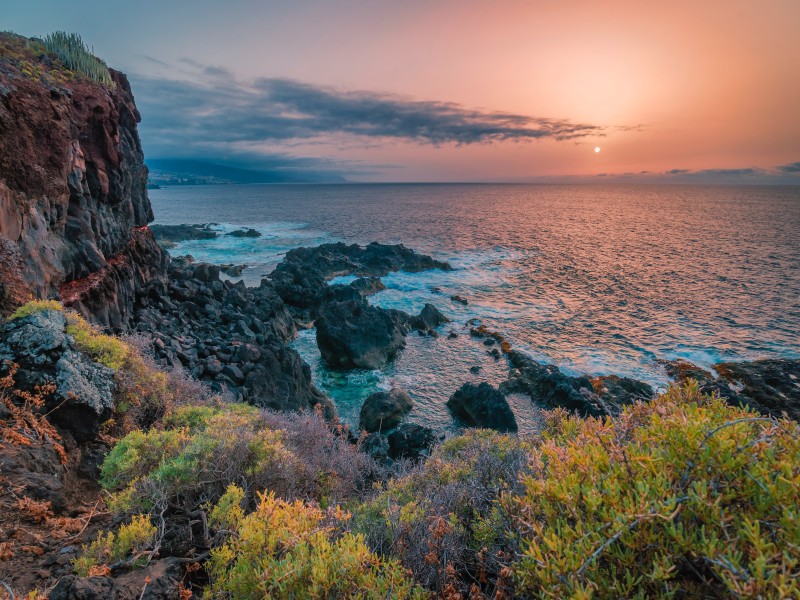 Tenerife or Fuerteventura: Which Canary Island to Visit?

With spectacular volcanic landscapes, pristine beaches, and year-round sunshine, the Canary Islands have long been a popular destination among European tourists. Now, the secret is getting out to the rest of the world. But Tenerife or Fuerteventura, which island to visit?

While the Canaries have many things in common – volcanic rock formations, balmy weather, and local cuisine – each island within the archipelago offers something slightly different. Tenerife, as the largest and most popular of the islands, is known as an all-rounder, with something for every type of tourist. Fuerteventura, by contrast, is a sun-baked and wind-blasted island most popular for its beaches and watersports.

From things to do during your vacation to the weather you can expect on each island, join us as we break down everything you need to know to decide which Canary Island you should visit.

Tenerife is the largest and most popular of the Canary Islands. Each year, over 6 million tourists visit the island to enjoy its beautiful volcanic landscape, sandy beaches, warm climate, and thriving nightlife. There are two distinct sides to Tenerife. The South is dominated by tourist-centric beach resorts, with all the infrastructure for holiday-makers to kick back and do very little other than sunbathing, eating, and partying. Think all-inclusive hotels, busy promenades, restaurants with all types of international cuisine, and plenty of thriving bars and clubs.

The North of the island is a totally different experience. Dense forests and lava-sculpted landscapes are punctuated by sleepy towns with more traditional bars, restaurants, and places to stay. The North does much less to cater to the tastes of the European holidaymaker, making for a more authentic, nature-led experience of the island.

Fuerteventura is the second largest of the Canary Islands. It has a drier, rockier landscape than Tenerife, with much less vegetation – grazing goats have led to the desertification of the island. But what it lacks in terms of greenery, it makes up for beaches. If you care less about forest trials and more about never-ending coastlines, Fuerteventura is the pick for you.

Famous for its wind – the name Fuerteventura roughly translates as ‘strong wind’ – Fuerteventura is a popular spot for wind and kite-surfers. Fuerteventura is a less popular tourist destination than Tenerife, with vast stretches of the island unknown to tourists. It’s therefore much easier to escape the tourist crowds on this island, making for a quieter, more low-key holiday.

So Tenerife or Fuerteventura, which one passes the vibe check? Well, both. But Tenerife just nudges it as an ‘all-rounder’ island catering to a broader range of holiday styles – from sun-worshipping hotel-dwellers to nature-loving adventurers.

Tenerife or Fuerteventura: Things to do

Believe it or not, there’s much more to do during your vacation to the Canary Islands than laze on a beach and sip cocktails. While the region has become known as a hub for resort-loving holidaymakers, there’s a real range of activities on Fuerteventura and Tenerife alike that challenge common perceptions of what a trip to the Canaries can entail.

In Tenerife, there are ample opportunities for active travelers to get their hike on. The Anaga Rural Park has some of the best hiking trails on the island. For animal enthusiasts, there are plenty of whale and dolphin watching tours that leave from the southwest of Tenerife around Playa de los Americas and Costa Adeje. With 27 species of whale to be found in Tenerife’s waters, there’s a great chance to spot some marvelous sea life.

Another memorable thing to do in Tenerife is stargazing at the Teide National Park, where it’s possible to hire an astronomer to point out the 83 officially recognized constellations visible from the park. And finally, taking a day trip to Garachico gives visitors the opportunity to swim in unique, volcanic rock pools that were created by the eruption of Montaña Negra volcano in 1706.

In addition to sun-bathing and wind-surfing, Fuerteventura offers a good range of natural wonders to explore during your vacation. Salinas del Carmen are the island’s only remaining salt flats, where you can marvel at their strange beauty and also learn about the history of salt-making on the island. Visiting Cuevas de Ajuy, the Canary Islands’ oldest rock formation at 70 million years old, makes for another interesting experience. Meanwhile, the island’s volcanic landscape is ripe for discovery, Malpaís de Arena was formed tens of thousands of years ago during the last major volcanic eruption on Fuerteventura. It offers stunning views from the crater.

Ultimately, there are more things to do in Tenerife than Fuerteventura, so if you’re an activity-led traveler, Tenerife wins in this category.

Tenerife or Fuerteventura: Landscape and beaches

Fuerteventura and Tenerife may belong to the same archipelago, but they look very different. Both islands have rocky, volcanic landscapes, but their similarities end here. While Fuerteventura has a barren, desert-like landscape devoid of much vegetation, Tenerife has an impressive array of different natural settings. From the forested slopes of the Anaga Mountains in the island’s North East to the poppy meadows of Anico and the sunbaked beaches of the South, Tenerife trumps Fuerteventura when it comes to biodiversity.

But what about beaches? With seemingly endless stretches of sandy coastline, Fuerteventura is a haven for beach bums and water sports enthusiasts. Rugged, windswept beaches and secluded coves abound. When exploring the island by car it’s easy to wind up with an entire beach to yourself. Tenerife, by contrast, has much more densely-populated shorelines. You’ll find a good array of sandy and pebble beaches here, but have a less ‘untouched’ feel in comparison to Fuerteventura. Often lined with restaurants and beach bars, Tenerife’s beaches lack the rugged, wild feel of Fuerteventura’s epic coastline.

So, Tenerife or Fuerteventura – which island wins in terms of weather. All in all, this one’s a tie. The landscapes of both islands are remarkable in their own way. The arid, windswept ruggedness of Fuerteventura is striking in its beauty, while its seemingly limitless stretches of beaches appeal to those with a taste for sun-drenched days spent on the sand. Tenerife, by contrast, offers a greater diversity of natural settings, boasting everything from dense green forests and built-up beach resorts. It’s a great destination for people who want a balance of natural wonders and a comfortable holiday setup.

Owing to their position off the East coast of Africa, the Canary Islands enjoy warm and sunny climates year-round. This makes them a great destination for sunshine-filled winter breaks and sweltering summer vacations. Each island has its own microclimate, with significant variation in temperature, rainfall, and wind – even on the same island. In Tenerife, the Northern part of the island typically has more clouds and rainfall, while the South is known for its sun and blue skies. Average temperatures range from 62F in January, to 75F in August, but they can reach as high as 69F in January and 86F in August. Generally, Tenerife is thought to have one of the sunniest and more reliable climates of the Canary Islands, alongside Gran Canaria.

Fuerteventura’s climate is distinct from all of the other Canary Islands. It is a stable climate without much variation, with the sun shining for 300 days a year. Temperatures range from between 53F and 64F in January, to between 66F and 77F in its hottest month, August. Due to its absence of high mountain ranges, Fuerteventura doesn’t trap many clouds, making for low levels of rain. In fact, it only receives 150 mm rain per year, almost exclusively in autumn and winter, from October to March. But what Fuerteventura lacks in rainfall, it certainly makes up for in wind. The island is renowned for its windy climate – which lends itself well to watersports but can make for a less enjoyable sunny day.

Tenerife or Fuerteventura, which island has better weather? Tenerife has the better weather of the two islands. While its Northern side has more rain and cloud than can be found on Fuerteventura, the island, in general, has a more enjoyable climate with higher temperatures and less wind.

If the local cuisine plays a starring role in your vacation, you’re probably wondering which island has the best food, Tenerife or Fuerteventura? In all honesty, there’s not a great amount of variation between the two Canary Islands when it comes to cuisine. The influence of international tourism means that both islands boast a significant array of cuisine from around the world. You’ll not only find the mainstays of Spanish cuisine – tapas, paella, and sangria – but also Italian, Chinese and Indian restaurants to boot.

Those seeking to explore more authentic, local cuisine will find an array of fish, seafood, and meat-heavy dishes. A lack of flatland to graze means that there’s less beef on the menus than there is pork, rabbit, and goat. The Canary Islands are also big producers of potatoes, with papas arrugadas – salty, Canarian potatoes – a staple of local diets. Most dishes are accompanied by Mojo picón, a delicious and versatile sauce made from olive oil, garlic, paprika, cumin, and vinegar that is a great accompaniment to meat, potatoes, and fish. With Canarian delicacies specific to the archipelago at large, as opposed to individual islands, it’s hard to say whether Fuerteventura or Tenerife has better food – both islands are great destinations for foodies.

The Canary Islands are well-known for their good value, and there’s not a great variation in price between Tenerife and Fuerteventura. According to Budget Your Trip, the average daily cost (per person) in Tenerife is €103 ($118), while the average daily cost in Fuerteventura Island is €99 ($113). This price includes accommodation, food, transport, and entertainment. There’s really little difference in the cost of food and drink between the two islands: typically, people visiting Tenerife spend on average $5.89 on alcoholic beverages per person, per day and people visiting Fuerteventura Island spend on average $6.22. Meanwhile, the average cost of days worth of meals in Tenerife is $35, compared to $30 in Fuerteventura.

To get around in Tenerife, the average visitor spends $55 per day, per person. While people spend $42 on transportation in Fuerteventura Island on average per day. And finally, when it comes to the cost of sightseeing experiences and attractions, you can expect to spend $25 in Tenerife and $27 in Fuerteventura.

Of course, how much you spend on vacation really depends on the type of traveler you are. Between Tenerife’s luxury resorts and high-end restaurants, there’s plenty of opportunity to rack up a much higher daily cost. Similarly, if you’re a budget traveler who stays in low-cost accommodation and cooks meals yourself, you could end up spending much less. However, in general, Fuerteventura makes for a slightly cheaper holiday than Tenerife.

Both Fuerteventura and Tenerife are brilliant destinations with a great balance of sunny weather, stand-out beaches, natural beauty, and things to do. If we had to pick a winner, we’d say that Tenerife is the better destination. This is simply due to variety. As the larger island of the two, with a more diverse landscape and a greater variety of natural landscapes and activities, it simply offers more. But don’t take our word for it – why not visit both and make your mind up for yourself?