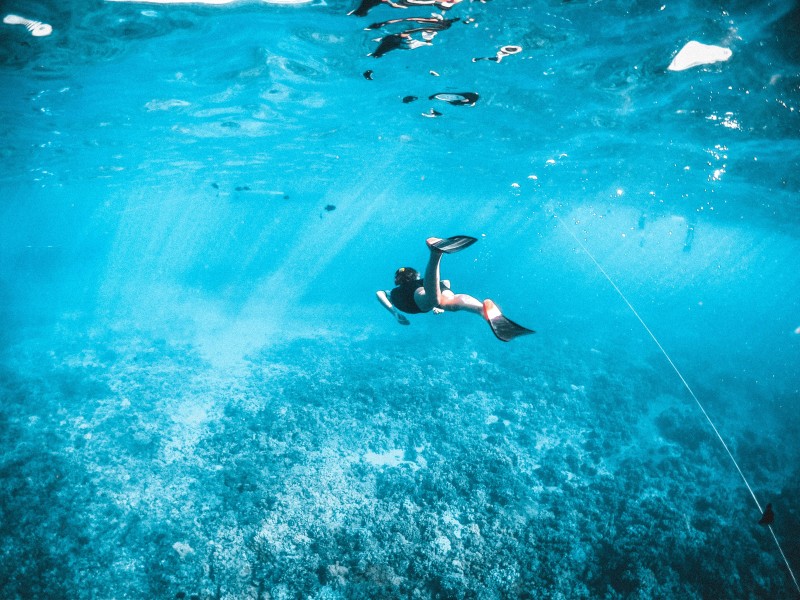 Tenerife Best Snorkeling Spots? 5 Options To Get To

If you’re on the hunt for Tenerife best snorkeling spots to go underwater on this wild and rugged member of the Canary Island chain, then be sure to read on. This in-the-know guide is all about showcasing the crème-de-la-crème of submerged spots the isle can muster, where you’ll find the best of the marine viewing going.

We’ve whittled it down to just a handful of locations. However, there’s a good range of places to explore in the offing. From famous bays that offer sand banks and seagrass meadows to wave-punched sea towns on the swell-smashed western coast, you’ll get all sorts for all level of snorkelers and swimmers here.

One thing to note: Virtually all of the Tenerife best snorkeling spots listed here will be better in the summer months. That’s one of the peak times to travel to these islands for a reason – the weather is better but also the water is warmer and clearer. Perhaps most importantly, though, the northwest swells slacken off a little to give calmer seas around the snorkeling coves, making for better visibility and accessibility all round.

Although it’s tucked under the rising cliffs north of the booming resorts of the Costa Adeje, El Puertito is often billed as an authentic dose of the Canarian coast. Just look at it – there are no soaring high rises, no big complexes of apartments up for rent. It’s just a couple of whitewashed coast cottages before a bay of sloshing waves and bobbing boats.

But it’s not the quaintness and calmness of it all that helps it reign supreme as one of our Tenerife best snorkeling spots. That honor goes to the resident population of sea turtles that are known to frequent the coves and rocky shoreline near the town. They’re mainly green sea turtles and can be seen all year round, even without venturing too far from the shoreline. (Sadly, incidents of boat propellers injuring said turtles have occurred in recent years, so you might find it harder to see the shelled creatures here than previously).

Beyond the turtles, El Puertito has plenty to whet the appetite of travelers with the bubble pipe and goggles in tow. You can paddle out down on Primera Playa Salvaje to the south of the town. It has an easier entry point than the harbor and stone headlands that host urchins and sardine schools on one end. There’s also the Puertito pebble beach closer to the village center, which is well protected from oncoming swells and a decent spot for snorkeling as a beginner.

Currently, there’s only a couple of places to stay in El Puertito – mainly low-key bolt holes that face the oncoming waves over the marina. However, there’s easy access from nearby Playa Las Galgas and the resort strips of the southwestern coast (you’re looking at about 20 minutes in the car from the heart of Playa de las Américas).

Abades Bay has firmly established itself as one of the finest dive spots on the whole island of Tenerife – and the whole Canary chain beyond, no less! A regular haunt among PADI veterans and open-water buffs, it’s a very accessible shore dive spot that offers a quick way to trade the rugged volcanic coast for an underwater world filled with nudibranchs and seahorses and corals.

The spot is located on the eastern coast, a smidgen over 30 minutes’ drive from the island capital in Santa Cruz de Tenerife. The access points are the duo of black-sand beaches that fringe the north end of the bay: Playa de los Abriguitos and Playa Cardones, though many dive groups will opt to enter the water from the rocky wall that fringes the main car park further south.

Don’t go thinking that just because Abades Bay is a scuba’s fav that it’s out of bounds to snorkelers. No sir! What’s amazing here is that the bay ranges in depth from a modest two meters to a full 12m, where the sand beds drop away into the reefs. That means you can come with goggles and a pipe and still get to see some of the submerged wonders.

And what wonders they are! Visions of sea turtles are pretty common. So are sightings of rarer reef dwellers like octopuses and triggerfish. If you’re brave enough to venture to the deeper portions of the bay, then you can also see groupers and even barracuda on occasion, not to mention dashes of jagged volcanic stone totally claimed by the Atlantic.

Palm Mar is another of the Tenerife best snorkeling locations that made its name as a dive site first. Mhmm…this is the home of the famed Palm Mar Wall, a steep drop-off from the land to the ocean that goes through three tiers of depth before leveling out a 25-meter plinth below the water. For PADI grads, it’s a chance to test that 30m capability to its full extent and see bigger sea creatures like rays, moray eels, and green turtles.

There’s snorkeling on offer in the shallower reaches of the Palm Mar stretch. We’d recommend entering a little away from the main dive site, if only to avoid the groups of bubble blowers that go in that direction. Better is the protected scythe of beach at La Arenita, which has a concrete breakwater to the south to allow for calmer fish viewing on the inside of the bay. From there, you can track north through pebble shoals that often host big sardine clouds and small fish.

We’d say Palm Mar – or at least the best of the snorkeling at Palm Mar – is for the more experienced crew of swimmers out there. This corner of the Tenerife coast is highly exposed to strong winter NW and W Atlantic swells, which means there are often some waves and undertows to contend with. More than that, it gets deep fast, so you’ll need to be comfortable with open water swimming in variable conditions.

Don’t go thinking that Tenerife best snorkeling spots are all wild and remote. Not so. Cue Playa del Duque, a beach that makes its home firmly in the midst of the southwest coast’s main resort strip. A couple of twists and turns in the coast around from Costa Adeje, it stretches between two headlands some 10 minutes’ drive from the beating heart of Playa de las Américas, the main tourist center on the island.

The main thing that elevates del Duque as a snorkel spot is the presence of a series of manmade seawalls some 325 feet off the beachfront. They act to chop down any rolling sets of waves and flatten the water, keeping it still, calm, and – importantly – clear on the inside of the bay. Those breakwaters have also helped to tame the drop-off a little, creating a relatively shallow paddle space for people not so keen on open-ocean swimming.

Naturally, the sea life that’s visible here won’t be the same striking mix of big carpet feeders that you get elsewhere around this Atlantic isle. But it’s not bad. Not at all…Striped fish, seahorses, jellies – there’s all manner of critters to witness. What’s more, this is one of the few snorkel locations on this list that’s backed by an organized beach, complete with sunbathers, umbrellas, and beach bars.

Playa de Antequera is the polar opposite of Playa del Duque on the snorkel front. Where the latter is notable for its accessibility and proximity to the main southern resorts, the former is certainly not. This stretch of volcanic black sand is hidden out on the northeastern fringe of the island some 8.5 miles past the city of Santa Cruz. You can’t even get there in the car! It’s either a long hike through the mountains or a boat from a nearby port.

The payoff for all that off-road effort is a truly secluded and empty place to don the snorkel pipe. The beach arcs in a stream of anthracite black under fluted cliffs, clusters of salt-soaked pebbles at its northern end and dashes of cinnamon sand at its southern end. For snorkeling, we particularly like the sheltered section on the far southeast of the bay, which usually comes in calmer than anywhere else here.

One thing to note: Playa del Duque is a known naturist beach. People come here to happily go au natural. More than that, the currents and waves can make it something of a challenge, even for experienced swimmers. Always check the weather and the sea conditions before swimming out here, and only go if you’re totally confident in your snorkel abilities.

There are oodles of options when it comes to listing Tenerife best snorkeling spots – this island boasts a whopping 212 miles of shoreline and comes in as one of the ruggedest of the whole Canary chain, after all. Our selection of five places includes both built-up resort beaches that you should find a cinch to reach (Playa del Duque, we’re looking at you!) and more remote and hidden snorkel locations (a nod to Playa de Antequera). It’s also got dive sites that are famed for their array of marine life, at Abades Bay and Palm Mar, for example.