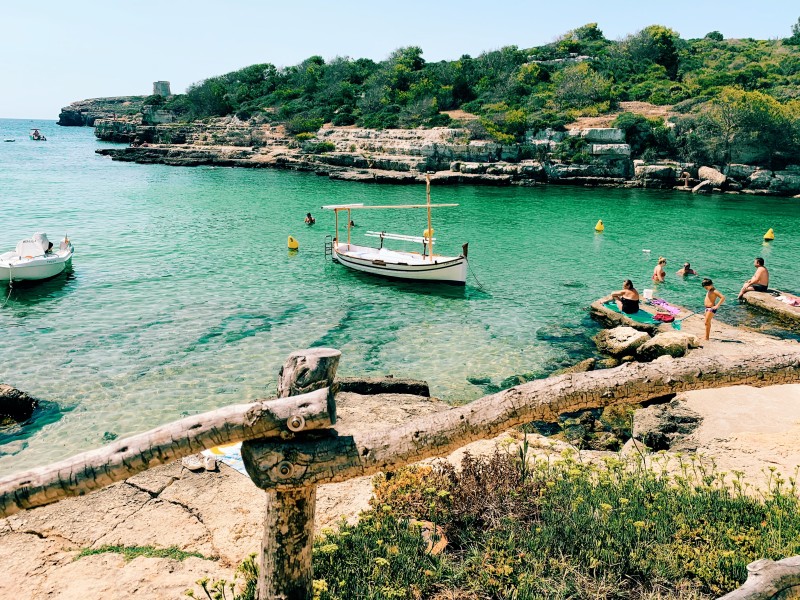 If you’re keen to get stuck into all the Menorca best beach clubs and bars, then you’ve come to the right place. This guide will run through a whole host of the coolest venues on the small, easternmost member of the Balearic chain to help you settle into the niftiest sea-view lounges and DJ-spinning decks the island has up its sleeve.

Don’t come here expecting the pumping techno spots of Ibiza, though. The range of Menorca best beach clubs is all about chilling and cranking up the R&R factor. There are some that get positively lively, but they rarely rumble with drum and bass and deep house until the early hours. On the flip side, there are oodles of options where you can sit back, kick it, and get lost in a good book while listening to the Mediterranean lap against the shore.

Our range of Menorca’s best beach clubs aims to offer spots on all four corners of the isle. It’s got places with sleek outdoor terraces above the bustling marinas of Ciutadella de Menorca. There are lazy decks and adjoining bars that spill out onto the playas of Mahon. There are even tempting chiringuito kitchens that serve traditional food and cold beers just meters from the shore. Let’s begin…

To channel the summer vibes of the White Isle and Mykonos, there’s nowhere for it but the Arena Beach Menorca. This is the closest you’ll get on this less-busy member of the island chain to those mainstay party hubs of the Med. It’s got all the ingredients – Balinese sun beds, couples’ cabanas, table service, and shaded loungers by the side of a huge pool.

The parties here tend to begin in the early afternoon with a changer that’s all chill-hop and summer bangers. It gets progressively wilder throughout the later hours and hits a zenith once the sun dips, as people take to the dance floor and the cocktail shakers start working overtime.

Technically, the venue isn’t right on the beach. It’s just back and over the road from the stunning bay of Cala en Bosc on the south coast. However, that’s really not an issue, since the folks here have constructed their very own in-house beach, known as Cala Moga. It’s made up of imported sands and sunbeds that sit right by a glimmering splash pool.

There are some VIP additions to boot. Check out the Moët & Chandon deck space if you’re keen to get through bubbly or are celebrating something big. Or dip into the adjoining bistro-bar to sample Mediterranean surf and turf with a curated set of Spanish wine labels on the side. The choice is yours.

Hola Ola is one of the go-to beach and sunset bars in the vicinity of the main town of Ciutadella de Menorca. To arrive, just head south from the historic core of the city, make your way through the suburb and resort of Son Carrio, and navigate to the picturesque inlet of Cala Blanca. The drinking hole makes its home on a narrow sliver of flat rock on the south side of the bay, opening to gaze north across the water and the clusters of pines and eucalyptus trees on the far side.

It’s nothing short of an exceptional place to come for a casual beverage. Bag one of the seats by the edge of the cliff and you’ll be a lucky one, what with perfect turquoise waters lapping against the rocks just meters away. There are also beanbags and pouffe seats with low-rise tables, just in case you’re in for a bit of sunbathing in the midafternoon, cocktail in hand, of course.

Which brings us neatly to the drinks at Hola Ola. There are plenty on offer. The mojitos get the plaudits for their fresh mint and zingy lime inclusions. We especially love the variations on that Spanish-Mexican classic, which can be made with infusions of mango, coconut, and lime to name just three. Drinkers here can also make their way through local wines and crisp, dry cava bottles, along with a whole range of meticulously curated aperitivo tipples.

No list of Menorca’s best beach clubs and lounges can possibly miss out on the Chiringuito Es Bruc Sant Tomàs. We’d put it among the most authentic of all the places to dine and drink on the coastline of this charming Balearic. Forget the sleek cabanas and the plush seating areas of the fancier joints. Ditch the DJ booths and the hip boho furnishings. This one’s all about one thing: Raw south Spanish vibes.

Yep, it looks more like a Mediterranean taverna than a place to catch the latest names in the deep house scene. Rows of driftwood fences ring the front. A whitewashed sun cover extends overhead. The seats are simple and comfy, with paper-covered tables dotting the whole joint. Most of all though: The view. The seaside part of the venue opens to offer 180-degree views of the Playa San Adeodato, an idyllic dogleg of white-yellow sand on the southern side of Menorca. It’s the perfect place for a romantic dinner by the shore.

Talking of dinner…it’s the food here that takes center stage over the drinks. Seafood reigns supreme. Fresh-off-the-boat catches are sizzled on open charcoal grills before being doused in pepper and salt and local olive oil. There are game-meat platters and chewy rings of calamari, but also stacked American burgers with plenty of pub grub.

Chiringuito Es Bruc Sant Tomàs opens at 10am in the morning and shuts up by 11pm. The proximity to the beach makes it a top choice for lazy lunches and long dinners that begin as the sunset starts on the western end of the bay. Service, like the food, is casual and welcoming, with a real, local Spanish side to it.

The Santadria Beach Club is one part SoCal, one part vintage European beach drinkery, all topped off with a healthy dose of boho furniture and uber-cool gastronomy. It’s located in the beating heart of the resort area of Son Carrio, which puts it just a stone’s throw from the boat-bobbing harbors of Ciutadella de Menorca, the main port on the west coast. You might have to search a little – the façade is nestled beneath a colossal palm tree and the beige-stone rises of the surrounding cliffs.

The decor is very Balearic. Following the seek clubs of Ibiza before it, this one sports thatched lightshades and wicker sun coverings. The tables are topped by grains of organic woods. The colors are muted and natural – think tan and musk and coffee brown. We especially love that half al fresco frontal seating space, which opens straight onto the sands of lovely Cala Santandria itself.

You might want to plan a trip here to coincide with lunch or dinner. The food is almost as tempting as the drinks, you see. Plates range from Far Eastern teriyaki noodles to locally caught fish grilled simply on an open flame and sided with potatoes and BBQ veg. Those who prefer imbibing can look forward to crisp, cold Spanish beer labels and cocktails that infuse the region’s juicy fruits into crushed-ice slushes.

Kentia Sea Club Menorca is one for the dedicated sunbathers and lux seekers out there. Spread out on the side of the Avinguda Urbanización in a bay that’s enfolded by the rugged Punta Rafalet, it’s got prime access to the Balearic Sea and really makes the most of it – think sunbeds lined up a few legs’ lengths from where the swell sloshes in and fantastic views of this whole section of coast unfold.

You’ll do most of your lounging here on the front terrace. That has lazers and beanbags in equal number, along with glass balustrades to maximize the panoramas. Alternative spots include the pool that’s tucked into the side of the venue. It’s large enough to host multiple groups and has some welcome shelter from the winds that can sometimes brush across the bay.

When it comes to the kitchen, the folks here churn out tasty plates of grilled veg and seafood salads topped with fresh-caught calamari. There are also tempting Spanish tapas tasting plates, like the crusty sourdough bread with its hat of curled Iberian ham. The wine list is hard to ignore (think some accomplished labels from the islands and the Spanish main), while the cocktail list covers all the usual bases.

You won’t have to look too hard to find some pretty exceptional places to drink and dine by the side of the Med on this island. There are oodles of venues that could easily claim a place on our list of Menorca best beach clubs and lounges. We’ve tried to include a good mix of what’s on offer here, from earthy Spanish tapas and seafood joints on the cliffs of the less-trodden south coast to hip bars within easy reach of the lively port towns.