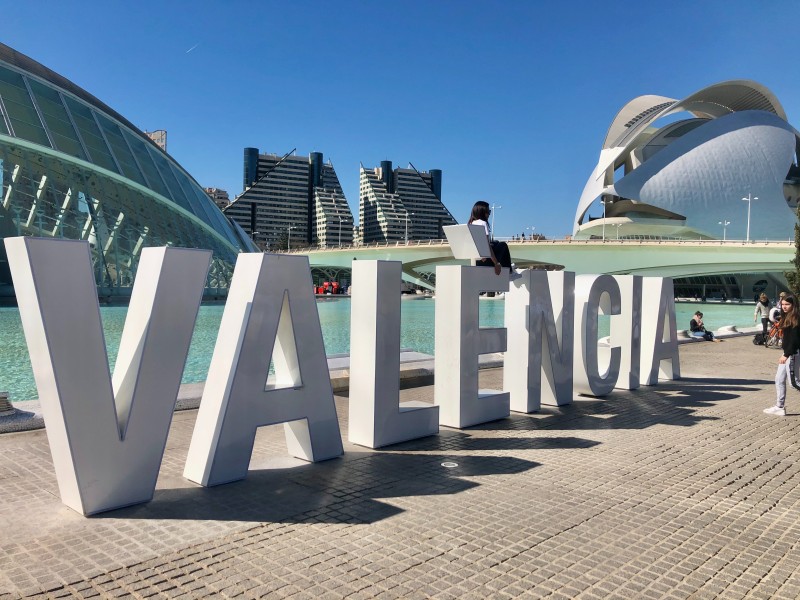 Is Valencia Worth Visiting? 7 Reasons We Think It Is

Is Valencia worth visiting? If you’re reading this then that’s probably exactly what you’re wondering! This handy little guide is going to get right down into the seven reasons that we think Valencia is totally awesome and well worth a visit.

Valencia is the capital of the autonomous community of Valencia and is the third-largest city in Spain after Madrid and Barcelona! This means there’s a whole load going on, and that the city has its own distinct culture, food, and dialect! Many people visit Valencia time and time again for its local “vibe” which gives visitors a more authentic Spanish experience.

While we love authenticity, we 100% get that you’re going to be on holiday, therefore we’re going to look at the things that will most concern tourists (think: food, weather, attractions). If you’re about ready, let’s delve right into why we think Valencia is totally worth visiting! Read on, read on!

What if we told you that you can have your cake and eat it too? Valencia is a city break AND a beach vacation rolled into one awesome little package. There are some great beaches within walking distance of the city center and its most popular attractions, as well as some lovely coastal areas that are easily accessible by car or public transport.

Some of the most popular beaches you can walk to are El Cabanyal (known as Las Arenas by locals), Malvarrosa, and Patacona. All these beaches are along one strip of the coast, so you can easily take a walk along the shorefront and check them all out! El Cabanyal is the closest to the city center, AND the closest to the metro/tram stops. If you’re looking for a busier beach that has a lot of services like sun lounger rentals, restaurants, and public toilets, then this is your best bet. Better yet, take advantage of the beachfront accommodation and take your city/beach break to the next level!

Malvarrosa beach is by far the most famous beach in Valencia and its beauty has inspired many artists! It’s easily accessible from the city and has all the services you could need. The golden sand beach is great for outdoor activities, there are special sections for surfing, windsurfing, canoeing, and stand up paddle boarding, you can even go for a dive on Malvarrosa Reef if you want! In the summer, expect to see locals enjoying the beach volleyball courts and hanging out in the nearby cafes, bars, and restaurants.

Great weather makes a great holiday, and that’s one of our top reasons why Valencia is worth visiting! The city is on Spain’s east coast and has a Mediterranean climate with an average of 300 days of sunshine a year *celebrates*. The winters are relatively rainy, but the summers are hot and sunny. It can get a little windy at times, but this helps to bring down the temperature during its toasty summers.

Because of its mild climate, Valencia is pleasant to visit all-year-round but if you’re looking for heat and plenty of sunshine, then visiting between June and August is your best bet! However, for fewer crowds and weather that’s still pretty darn nice, then the shoulder seasons (March to May and September to October) are a fantastic time to head over!

It’s no secret that Spanish food is the bomb-diggity, but since the country is made of up several different regions, each place has its own specialty. Valencia has some of the great’s when it comes to Spanish food, and its pièce de résistance is Paella. This dish is probably one of the most well-known Spanish dishes AND it comes from the Valencia region, so you just know the city is going to have some of the best around!

Another typical dish from Valencia (but one that is overshadowed next to its more famous cousin) is Fidueda. Think seafood Paella but with noodles. Ohhh yeah. This is definitely one for any seafood lovers out there as the dish typically includes monkfish, squid, and shrimp.

More of a sweet tooth? Then don’t fret as the city also has several amazingly delicious dishes to satisfy that sugar craving! A must-try during those hot summer days is a cool glass of Horchata. Horchata (for those who don’t know) is a sweet, milk-like drink made of white rice, cinnamon, and sugar. It’s vegan too! In Valencia, it is typically served with Fartons, a sweet bread glazed with sugar. Another must-dry sweet dish is Flan de Calabaza. Pumpkin is very popular in Valencia, and their local pumpkin flan is simply fantastic.

Valencia is worth visiting not only for its incredible historical attractions but for its modern attractions too! Whether you decide to spend a couple of days, a week, or even 10 days in this buzzing city, you wouldn’t run out of things to do.

One of Valencia’s top attractions is the City of The Arts and Sciences. Not only are the buildings themselves a work of art (we’ll get more into that later), but the complex is great fun for families, friends, or solo travelers. The “city” covers roughly two kilometers and houses several museums and exhibits. Some of our favorites exhibits to visit are Europe’s biggest aquarium, Oceanografic, the Science Museum, and Umbracle, a 17,000 square meter open access Mediterranean garden (during the summer it’s even open at night!).

For something a little more historical, then the Valencia Cathedral should be on the top of your list. It is the most important religious building in the city, and is thought to be the home of the original Holy Grail, the cup said to have been used by Jesus during the last supper – now that’s impressive.

If you’re a fan of walking around the streets and admiring architecture, then Valencia is definitely worth visiting. The city is simply packed with incredible buildings and a range of architectural styles. There’s everything from Gothic cathedrals (gargoyles and all!), Romanesque structures, and modern, futuristic buildings.

We are in awe of the Mercat Central de Valencia (or the Central Market of Valencia), which has got to be one of the most beautiful covered food markets in the world. Built in 1928, this building has an amazing iron structure, decorated with vividly-colored stained glass windows and ceramic tiles. It also doubles up as a foodie’s paradise with vendors selling everything from cheeses, bread, spices, candy, and nuts! Arrive early with an empty stomach and get ready to sample away!

For a futuristic experience, as we mentioned earlier, the City of The Arts and Sciences is well worth a visit. Yes, there’s a tonne of incredible exhibits, but actually just walking around the “city” and taking in the amazing design is a day out in itself! The site was largely designed by Valencia native, Santiago Calatrava, a world-renowned architect. The city’s innovative design has buildings sitting on large reflective pools, elevated walkways, and a mixture of glass, iron, and white concrete. It is really something to behold.

Our last absolute must-visit for Valencian architecture is the Palacio del Marques de Dos Aguas, the home of the National Ceramics Museum. It has a spectacular Baroque face, ornate balconies, and dramatic stone sculptures!

It’s no secret that Valencians know how to party, and if a night out on the town doesn’t convince you, then maybe the city’s numerous festivals will. There are celebrations all throughout the year, honoring local traditions and saints.

By far the largest and most well-known festival is Las Fallas. People come from all over the world to experience this weird and wacky tradition, and if you’re thinking of visiting around March time, then definitely plan your trip around attending the festival. Las Fallas takes place every March and is a delightful mixture of art, traditional, and satire (sounds intriguing, right?). There are costumes, fireworks, music, and of course, the colorful ninots – huge paper mache statues that get parades around the streets. These are a real sight to behold, and you may spot a satirical version of your favorite reality TV star, least favorite politician, and even a grotesque version of your favorite cartoon character. Nothing is off the table.

Another great tradition of the city is the July fair. Celebrated since 1871, this festival has changed quite a bit over the years, and nowadays you can expect a month of music concerts, bullfighting, fireworks, and the famous battle of the flowers. This event marks the closing of the July Fair festivities and is free to watch. Women dressed on floats parade through the city center, while crowds throw marigold flowers at them. We think it’s safe to say, it’s a LOT of fun!

Valencia isn’t your typical urban landscape. It actually has green spaces for days, and your lungs will definitely appreciate the fresh, clean, air. There are over two million square meters of gardens, the most popular of which are the Viveros, Botanic Garden, and the Turia Gardens. If you enjoy cycling as a means of getting around then Valencia is definitely worth visiting. The city also boasts almost 150 kilometers of cycle paths and even has 40 cycle-priority streets!

The Turia gardens are one of Spain’s largest urban parks, and have something for everyone! There are areas for sports, romantic picnics, and family fun. For a more historical green space, head over to the Viveros garden, for flowers, fountains, and sculptures. During the July Fair, this park also hosts awesome nighttime concerts.

A little further afield (but still only 10 kilometers away) is the Albufera Natural Park. This freshwater lagoon is the perfect place to recharge and relax away from the hustle and bustle of the city. The park is wildlife-rich and an important stopping point for migratory birds (if there are any birdwatchers reading, it’s time to get packing!). You can rent a boat to take you out on the water, and for the end to a magical day, time your boat ride with the magnificent sunset.