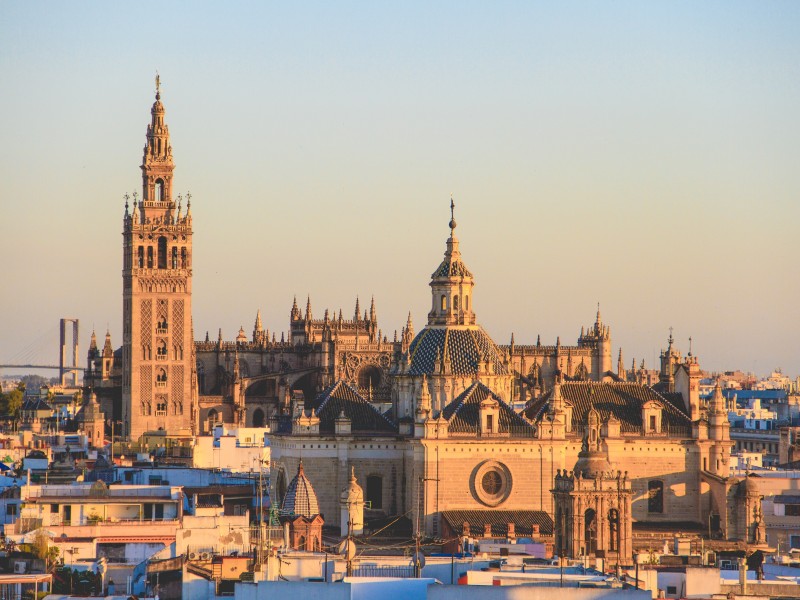 Is Seville, Spain, Worth Visiting? 7 Reasons To Come

Is Seville, Spain, worth visiting? Let’s put it this way: There’s simply no doubt about it that this city on the side of the winding Guadalquivir River is one of the most enthralling in Spain. It’s a hub for dining, for dancing, for culture, and history, and it’s in one of the sunniest parts of the country to boot.

Yep, you’ll find old Moorish castles turned Christian palaces in these parts, along with more tapas bars than you can shake a marinated pork cheek at! On top of that, there’s one of the largest historic city centers in Spain, along with excellent proximity to both the soaring sierras and the salt-washed Atlantic coast.

In this guide, we’ll answer, “is Seville, Spain, worth visiting” by focusing on seven key points about the town and its surroundings. The aim? To offer an insight into just how awesome a jaunt to this balmy southern city can be, no matter if you’re on the hunt for tasty tapas or wild walks in the Spanish mountains.

For the Casco Antiguo

There’s hardly another old town district in Spain that can match the sheer majesty of the Casco Antiguo in Seville. Now, that’s seriously saying something – this is the home of Madrid’s literary-rich Barrio de las Letras, the old walks of Granada, and the medieval center of Toledo to name just a few. But we really do think Seville stands out from the crowd. Here’s why:

First off, the district is huge. It measures nearly two miles up and more than a mile across. Within, it’s a whole maze of winding streets and labyrinthine alleys, sometimes emerging onto grand plazas, other times disappearing down shadowy side streets where the hubbub of a tapas restaurant fills the alcoves. On top of that, the architecture is downright stunning…

There are just so many buildings to wonder at. You’ll be clicking the camera at every corner. The great 16th century Palacio de la Condesa de Lebrija, with its Arab-era gardens. Click. The flower-strewn Palacio de las Duenas, fronted by its hacienda-style gatehouse. Click. The grandiose Casa de Pilatos, where the courtyards hide Greek effigies and more. Click. That’s also just scratching the surface.

Seville certainly has a claim to being the tapas capital of Spain. There’s something like 3,000 individual tapas eateries in the center alone, not to mention stacks and stacks more in the surrounding region. Their MO? The rustic kitchen of sunny Andalusia and seafood that’s been plucked straight out the Med, all served as trademark small dishes ready for sharing.

There are some dishes that we think you cannot miss out on. So, order yourself up: Patatas bravas (spicy potatoes in a paprika-tomato sauce), carrillada de cerdo (a rich pork cheek stewed in Seville wine), espinacas con garbanzos (a veg-eater’s delight, mixing chickpeas and spinach with rusk bread), cazon en adobo (shark meat marinated in cumin and then deep fried).

Another great thing about Seville is that it’s a big enough city to support all manner of eateries. You don’t just have the Spanish places here. You also get international pizza joints, Italian pasta kitchens, all-American burger houses, British pubs – you name it.

Some say that the great downfall of Seville is that it isn’t on the coast. We say the opposite. Being away from the beaches is precisely what’s helped this vibrant city remain just that, a vibrant city. It’s not given in to the usual tourist developments and become an out-and-out resort like other towns on the nearby Costa del Sol, for example.

What’s more, the beaches are still pretty near and they showcase the wilder, Atlantic side of Spain. You can go south to the windy points of Tarifa, which have old castles looming over bays that are tailor made for surfers. Even closer is the town of Sanlucar de Barrameda, which has protected sand stretches right by the mouth of the Guadalquivir River.

It’s also even possible to hit the world-famous beaches of the Algarve from Seville. Yep, less than two hours in the car and you could be stepping out onto the soft sands of Tavira in southwestern Portugal, where flamingo-filled lagoons give way to glistening golden powder. See…Seville doesn’t mean forgoing your taste of Vitamin Sea!

If the Casco Antiguo is the historic core of Seville, the Triana neighborhood is the cultural pulse of the city. A large wedge of crisscrossing streets that spreads westwards from the bends of the Guadalquivir River, it’s an off-beat area with stacks of character.

Way back when, Triana was considered a bit of a downbeat, working-class district. It was a hub for artists, for sailors, for potters, and maverick bull fighters fresh out of the arena. Today, that forms the foundation for an area that oozes charm, and offers intriguing places like the Centro Ceramica Triana, a handicraft museum dedicated to ceramics.

More than anything, though, Triana is about enjoying the buzz of the streets. There are loads of bars and cafes here and the people watching is second to none. Walk over from the old town via the Puente de Triana and hit San Jacinto – the main thoroughfare – to begin your adventure.

Seville has some of the most enthralling festas in the whole of Spain. They are your chance to sample the local culture and let your hair down at the same time. Just be sure to book early if you plan on coming for one of these, because they can draw in thousands of visitors and rooms sell out fast.

Easter kicks things off in the early spring with the Semana Santa. These aren’t hedonistic party nights, but solemn displays of floats depicting episodes from the Mysteries of the Rosary; a showcasing of the region’s deep, deep Catholic faith. Then comes the Feria de Abril, which sees thousands of small tents set up along the Guadalquivir River in a whirlwind of flamenco dancing, tapas, and Spanish guitar.

There are a number of smaller fiestas too. September brings the Bienal Flamenco, a celebration of the national dance. Christmas has markets on the plazas and the annual switching on of the lights around early December. Some people will also party on Dia de Andalucia, which marks the gaining of autonomy for the state back in February 1980.

Seville actually sits on a relatively flat part of southern Spain, on a wide plain carved open by the winding Guadalquivir River as it flows down to the Atlantic. But this is Andalusia, and that means that the mountains are never too far away…

Cruise northwest up the A-457 for 1.5 hours out of the city and you’ll soon enter the Parque Natural Sierra de Hornachuelos. It’s responsible for covering a whopping 30% of the even-larger Dehesas de la Sierra Morena Biosphere Reserve, which is a unique environmental area filled with cork oak woods and black vultures. The region has fantastic hiking – make for the Huerta del Rey Visitor Centre for a map and access to the top trailheads.

There are even more mountains 1.5 hours to the south of Seville. Cue the Sierra de Grazalema. These are more quintessential Andalusian peaks, reminiscent of scenes from Spaghetti westerns. They are places to hike between pueblos blancos like Villaluenga del Rosario and up to crashing waterfalls like Cascada del Mitano.

The Royal Alcazar of Seville

Prepare to be stunned by the sheer majesty of the vast Royal Alcazar of Seville. Considered by many to be the prime example of the Mudejar architectural style left in Spain, it was built by the Moors who conquered this part of Europe around the early 7th century. Later, after the Christian reconquest of the country, more and more additions came, making the palace the layer-cake of things seen today.

Highlights of a tour include the Patio del Yeso, an elaborate half-indoor, half-outdoor terrace that’s made from filigreed tilework. Then there’s the Patio de las Doncellas, with its honorific inscriptions to King Peter of Castile and marble-laid fountains. Oh, and don’t forget to see the Salon de Embajadores, where kings and queens have been married in the past.

Of course, the best way to explore the Royal Alcazar is on a guided tour. They can be booked online before you even arrive in Seville and often involve a queue-jump, which is top news for anyone visiting in the booming summer months between May and August.

Is Seville, Spain, worth visiting? Our verdict

So, is Seville, Spain, worth visiting? You bet it is! Seville is a city that has loads going for it. It might not be on the coast, but that actually adds to the charm, keeping the town more authentic and cultural than some of the region’s more developed resorts. Heritage-loving travelers are sure to be enchanted by the gorgeous Casco Antiguo old town, hikers can hit the sierras to the north and south, beach lovers can go west to find the Atlantic. Oh, and this is a festival and food mecca to boot. What are you waiting for?