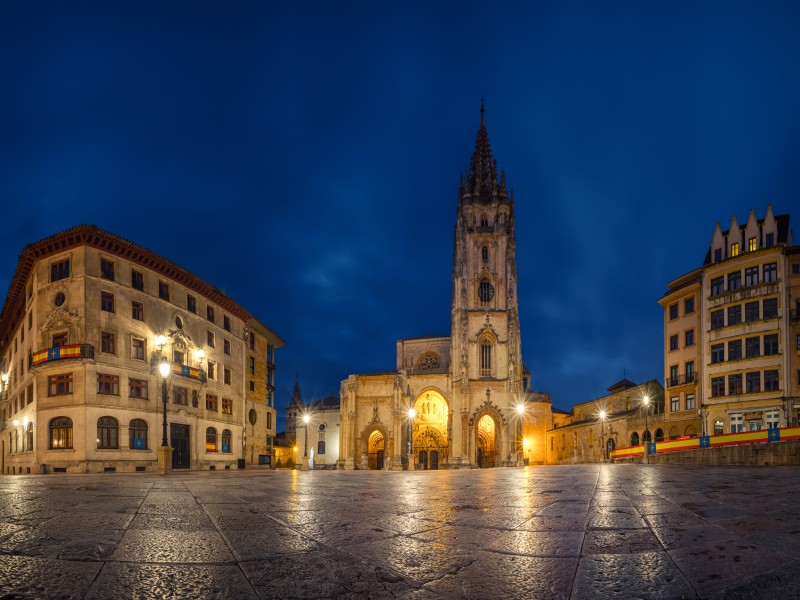 Is Oviedo Worth Visiting? 7 Reasons To See This Amazing City

The capital of the principality of Asturias is a part of Spain that not too many people have heard about. Far away from the gleaming beaches of the Costa del Sol and the monument-rich streets of Barcelona, it sits amid the undulating hills of the Cantabrian Mountains close to the wild Atlantic beaches on the Bay of Biscay. But is Oviedo worth visiting?

Cue this guide. Here, we’ll run through several different aspects of this off-the-beaten-track Spanish city so you can get a feel for its charms and draws. We’ll take a look at everything from the nightlife scene to the history and the sights that await between the old streets of the downtown, but also peer out to the sands and mountains that beckon adventurers away from municipal limits.

We don’t think you’ll be disappointed with what you find. Oviedo is a charming and characterful place that has regal parks and early medieval building works. But it’s also close enough to the coast for surf adventures, and to the rising sierras for hiking expeditions. So, without further ado, is Oviedo worth visiting? Here are seven reasons we say yes…

Oviedo isn’t like the big-player metropolises of Madrid or Barcelona. It’s not got the same rep as a holiday mecca a la the Costa Blanca and the Andalusian hill towns. The upshot? You should find a much more local vibe to this city than in some of Spain’s other mainstay draws. That, in turn, means a chance to get stuck into the ebbs and flows of real life, rather than just dodge tourist hordes for the whole weekend.

What’s more, despite being the official capital of the Asturias region, Oviedo isn’t actually its biggest city. That honor goes to the port town of Gijon just up the highway to the north. And that means the atmosphere is a touch sleepy, a touch provincial, though still vibrant and fun, helping to add character to the center without it feeling overwhelming.

To put this another way: Oviedo is firmly off the tourist radar of Spain. You won’t find millions upon millions of folks jetting in to tan themselves on the sands and hit the museums. It’s quiet, calm, authentic, and indelibly local at every turn.

The Casco Antiguo is the heart of old Oviedo. Hemmed in on all sides by a bustling ring road, it’s compacted into the very middle of the town, with the vast San Francisco Park and its resident peacocks as its anchor point. Around that, lanes and alleys fan out to the west, twisting through a medley of tapas eateries here, opening onto handsome cobbled plazas there.

Basically, the Casco Antiguo is the focal point of all the historic interest in the city. It’s home to the vast bulk of the landmarks, including the great Metropolitan Cathedral of San Salvador of Oviedo, the half-crumbled Casona de Regla gateway, and the grand Palace of Camposagrado to name just three.

But we don’t mention it with such fervor because of the sightseeing alone. We mention it because it’s a truly fun place to get lost in. Cafés spill onto cobblestone sidewalks by the bucket load in these parts, offering ample people watching from morning until night. There are hidden jazz bars and beer halls, but also moody cider cellars where you can sample the local tipples. All good fun.

As the cultural hub of the Asturias region, Oviedo is packed with unique museums that chronicle the story and artistic heritage of this part of Spain. Most are located in the middle of the town’s old core, which means they should be easy to walk between for when you’re putting together that culture-filled itinerary.

We’d recommend starting in the Archaeological Museum of Asturias. It’s a fascinating collection in an age-stained monastery in the thick of the Casco Antiguo, dedicated to showcasing Neolithic and Bronze Age finds from the surrounding region, some of which date back tens of thousands of years! Right next to that is the Museo de la Iglesia de Oviedo, which also has some enthralling exhibits related solely to the role of the church in the city over the centuries.

We’d also recommend walking to the north end of the old town to spy out the dilapidated Fábrica de Armas de La Vega complex. It’s a onetime weapons factory that’s not technically a museum but offers a glimpse into the industrial heritage of greater Oviedo.

Okay, so you might not get those party-hungry traveler crowds like down in Ibiza here, but thousands of students call Oviedo their home and that means there’s a pretty pumping nightlife scene to match. The only thing to remember is that things will generally be a bit wilder when university is sitting, which excludes the high summer and the midwinter around Christmas.

Things tend to start around sunset time on the Calle Rosal. That run of tapas joints and cerveceria is where the students go to meet and get their pre-drinks a-rolling, and to dine on tasty northern Spanish small plates while they’re at it. Alternatively, you can pick Calle Gascona, which is also known by its boozier moniker: Cider Boulevard. That’s got all the traditional Asturian cider cellars that pump out potent apple-made tipples.

Later on, the action tends to move deeper into the old city, to the cocktail bars and live-music venues of Calle Mon de Oviedo. They include moody Las Mestas, a place that goes until very early the next day, and the craft bar of El Confesionario.

You only need to glance at the map to see that Oviedo is hemmed in on all sides by mountains. They roll out to the north in soft slopes to meet the sloshing Bay of Biscay. To the south, they crumple into higher peaks that clash with the clouds at the summits of the Las Ubiñas-La Mesa. There’s plenty to get stuck into if you’re a hiker.

Unquestionably the piece de resistance of this region is the Parque Nacional de Los Picos de Europa. That drapes over the highlands about an hour’s drive to the west of Oviedo. It’s home to gnarled mountains that would like right at home in the Alps, eventually spilling down to meet the limestone bluffs of the Parque Regional Montaña de Riaño y Mampodre further south. The trails are endless in those parts.

Oviedo also happens to sit on the courses of a number of ancient long-distance trails. The most famous of those is the Camino Primitivo, which was the original pilgrimage path to Santiago de Compostela. It can take nearly 90 hours to complete over several days and is a serious but life-changing undertaking. Good luck!

Just as the mountains are only over the horizon in Oviedo, so too are the beaches. They come courtesy of the impossibly wonderful Asturian coastline. This is a real best-kept secret of northern Spain; a land still capable of offering totally empty sweeps of golden sand lashed by frothing Atlantic waves.

Anyone looking to score some surf will undoubtedly love the bays that string east and west of Playa de Xagó. They’re about 35-45 minutes’ drive from the center of Oviedo but do well to pick up the regular NW swells that roll down in the autumn and winter months.

The most striking beaches might be a bit further away – between 50 minutes and 1.5 hours. They come in the form of Playa de Cuevas del Mar, with its high-arched rock bridges, and Playa de Rodiles, a rust-colored sand stretch enfolded by lush headlands covered in forest.

The culinary traditions of northern Spain and the Asturias region in particular are pretty different to what you find in the more trodden parts of the south around Andalusia and Valencia. Here, the influence of the Atlantic Ocean runs deep, but there are also noticeable touches of French cooking, Basque cooking, and mountain-style cuisine.

There’s no dish better to begin with than the hearty highlander stew of fabada Asturiana. Packed with butter beans, paprika, pork shoulder, and salty pancetta, it’s a warming bout of spice and protein that was designed to fuel the locals through the hardy winters.

We also love the milky Ahumado de Pría and Peñamellera cheeses that come from the surrounding sierras. They are generally sweet with a bitter aftertaste, matching perfectly with rich red wines or a coffee at breakfast. Oh, and you simply can’t leave without sampling the local Asturian cider. Oviedo is the epicenter of cidermaking here – remember Cider Boulevard!?

Is Oviedo worth visiting? Our conclusion

Is Oviedo worth visiting? We really think it is. If you’re after an off-the-beaten-path place in Spain to get stuck into rich historical tales and unique food, then this really could be the city you’ve been searching for. It’s less busy than many places in the country, has a gorgeous old town laden with medieval relics, and sits amid some of the most stunning countryside in the nation – there are jagged mountains to the south and west but also wild beaches with surf to the north.