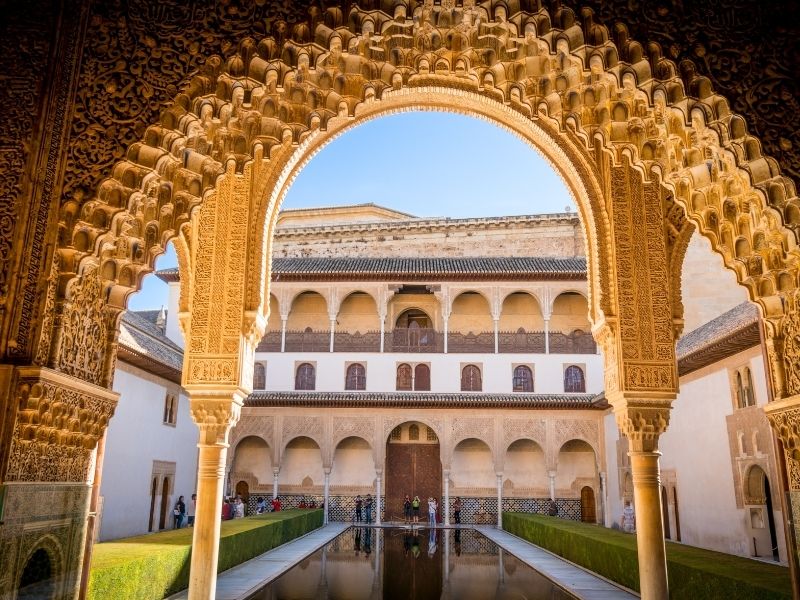 Is Granada Worth Visiting? 7 Reasons Why The Answer Is Yes!

If you’re wondering if Granada is worth visiting, we’re here to tell you that the answer is a resounding yes! And we’re not the only ones who think so. Granada is one of the most visited places in Spain and is home to one of the country’s most popular attractions, the ancient fortified palace, the Alhambra.

But many visitors to that famous hilltop monument have no idea what to expect from the rest of Granada. They’re surprised to find an energetic, fascinating city just filled with sights and opportunities for entertainment. And they’re even more surprised by the beauty and diversity of the surrounding landscape.

So, to make sure you’re prepared when you arrive, we’re giving you seven reasons why the Andalusian city of Granada is not just worth visiting but is one of our favorite places in Spain.

Granada is home to one of Spain’s most visited tourist attractions, The Alhambra. This hilltop fortress is one of the best-preserved relics of Moorish rule in Spain and contains beautiful examples of Islamic Architecture. The UNESCO-listed complex covers an astounding 1,530,000 square feet and is home to multiple palaces, chambers, gardens, and courtyards, each one intricately designed and decorated. Anyone interested in architecture and history could spend days exploring its many wonders. But even non-history buffs can’t fail to be impressed by its incredible beauty and the views from its walls.

But don’t spend your whole holiday in the Alhambra. The city is filled with historical and architectural gems such as churches and religious monuments where Christian and Islamic designs can be spotted beside and overlapping each other. And make sure you take the time to walk through the city’s distinct neighborhoods, including the winding maze-like streets of the old town of Albaicin or the whitewashed, flamenco district of Sacromonte.

Granada has one of the most fascinating histories of any Spanish city, and a huge part of its charm lies in how this history is recognized and celebrated. Influences from Granada’s Moorish past lie comfortably alongside its Spanish and Andalucian traditions. This blended culture is evidenced everywhere, from the architecture to the languages spoken, the food to the festivals. Plus, Granada is a hugely popular destination for international tourists and is home to a large university that attracts a modern, multicultural populous.

This is a city where you can visit an ancient Hammam, a modern art gallery, and a Romani neighborhood flamenco show all in one afternoon. You can stop in a traditional taverna for a Spanish beer, at a hip cafe for a specialty coffee, or in the Street of Tea Houses for a glass of Moroccan mint tea. You can shop at quirky second-hand stores, high street chains, luxury boutiques, or colorful, chaotic bazaars.

Granada skillfully blends multiple cultures as well as historic and modern delights, it’s a welcoming, intriguingly diverse place that is well worth visiting.

Some people might avoid Granada because it’s not a traditional beach holiday destination like nearby Malaga. But trust us when we say that there is plenty of natural beauty to keep you happy.

Granada sits in the foothills of the Sierra Nevada Mountains, which not only form an impressive backdrop to the Alhambra but offer a playground of activities all year round. You can climb, hike, mountain bike, wildlife watch, and paraglide your way through those mountains. Then, in the winter, strap on your skis and enjoy Europes’s most southern ski resort!

And if you can’t live without the beach, hop in the car, it’s only a short drive to the Costa Tropical. Granada’s closest stretch of beaches might not be as famous as the nearby Costa del Sol, but it’s also nowhere near as busy. These beaches are characterized by their remote vibes and dramatic rocky scenery created by the mountains stretching down to the sea.

Back in the city, enjoy riverside walks, the many beautiful gardens of the Alhambra, lush botanic gardens, and several wonderful hiking routes that will take you to the best sunset spots overlooking the city.

With its stunning landscapes, photogenic architecture, and collection of notable galleries, Granada is well worth visiting for artists and art lovers alike. Your first stop should be the Museum of Fine Arts located within the Palace of Charles V, showcasing over 2000 classic artworks and sculptures.

Then head to Galeria Granada Capital, a more contemporary gallery with paintings, sculptures, and photography displays by local and international artists. Next up, take a tour of the many smaller, and independent galleries scattered through the city, and keep an eye out for the street art as you go!

Granada is home to an impressive street art scene and following the walking trails can be a great way to spend the day and explore the city. Start in the Jewish Quarter, Realejo, where the colorful works contrast dramatically with the ancient buildings. Much of this work was created by El Niño de las Pinturas, aka Paul Ruiz a Spanish-born artist who has achieved global fame with his edgy street artworks.

If you’re anything like us, then one of the best things about traveling is getting to sample amazing food. Well, Granada delivers just that. it’s known for having some of the best food in Spain, much of it unique to this specific region. You’ll find traditional meals that have been made in this city for centuries, sweets and pastries are only made for certain religious occasions and saints days and meals of Moorish origin flavored with spices and condiments unusual within the wider Spanish cuisine. Plus, the mountain villages above Granada are famous for producing some of the country’s best-cured meats and cheeses, and the nearby coast keeps the city fully stocked with fresh seafood. And the best thing about it? You can sample many of these delicacies for free!

Granada holds to the Andalusian tradition where tapas is served free when you order a drink. So simply head out to one of the city’s many tapas bars, order a small beer for a couple of dollars and then enjoy the small bite-sized dish that comes with it. It’s customary to enjoy only one or two rounds in each establishment before moving to the next bar. It’s an excellent, sociable, and budget-friendly way to explore this city’s culinary scene. But if you’re a little unsure how to go about it, you can join one of the many organized tapas tours that operate in the city. This way you will be guided to the best and most tourist-friendly tapas bars and be assured of sampling a wide range of dishes.

The Lively Nightlife and Entertainments

If there’s one thing Granada knows how to do well, it’s throwing a party. This city’s events calendar is packed with occasions for celebration, whether it’s traditional holidays, religious dates, or historic battle victories. If you’re lucky enough to visit during any of them, you will really see this city come to life.

Plus, this is a city that loves its music. Granada hosts several festivals throughout the year for music and dance of all genres. Some occur within the Alhambra and palaces, adding an incredibly atmospheric setting to the events. And no visit to Granada is complete without experiencing a flamenco show! You’ll find them on offer all over the city, but head to Sacromonte for some of the most authentic. It’s not called the flamenco district for nothing! And why stop at just watching? Why not join in and take a flamenco class while you’re there?

If you’re after a more traditional Spanish night out, you’re in luck. Granada has the energy of a much bigger city, and nowhere is this more apparent than when the sun goes down. Wherever you’re based in the city you’re sure to stumble across a crowd having a good time. But as a guide, Plaza Nueva and the area around the Cathedral hold the best collection of late-night tapas bars. Plaza de la Universidad is home to a dynamic, youthful crowd and popular live music venues. Calle Pedro Antonio outside the city offers a range of nightlife on a student-friendly budget, while Calle Elvira in the city center provides a great collection of tourist-friendly bars and clubs.

Granada’s climate is a big reason why this city is worth visiting. Andalusia is one of the warmest regions of Spain, and as this city sits a little way inland, it doesn’t even get the cooling influence of the coast. That means summers get hot hot hot! Temperatures in Granada in the summer tend to sit around the mid-30s but can reach 40°C, surpassing those of nearby beach holiday hot spot Malaga.

This can be too hot for some people, and it’s not ideal for walking around the city. So do as the locals do and head into the cool altitude of the Sierra Nevada mountains when the heat gets to be too much. Or consider visiting during the shoulder seasons of spring and autumn, when Granada enjoys a mild climate that’s very pleasant for hiking and perfect for city exploring.

The temperature does drop in winter, and the weather gets wetter. Although the days stay mild with an average temperature of 17°C, the nights often dip to 0°C or below. Not to worry, though. Those chilly temperatures turn that rainfall into the snow needed to keep the ski resort in action! Plus, seeing the Alhambra and surrounding mountains dusted with snow is magical.

Is Granada Worth Visiting? The Conclusion

We don’t even need to think about this one: yes, Granada is absolutely worth visiting! This Andalusian city is home to one of Spain’s most impressive tourist attractions. It’s got a depth of history unsurpassed by many other cities and a fascinatingly complex culture.

The landscape surrounding it is not only stunning but allows for snowboarding in the morning, hiking at lunchtime, and sunbathing in the afternoons. It’s got a packed events calendar, beautiful climate, buzzing nightlife, eclectic shopping, delicious food, and its own ski resort! What more could you ask for?