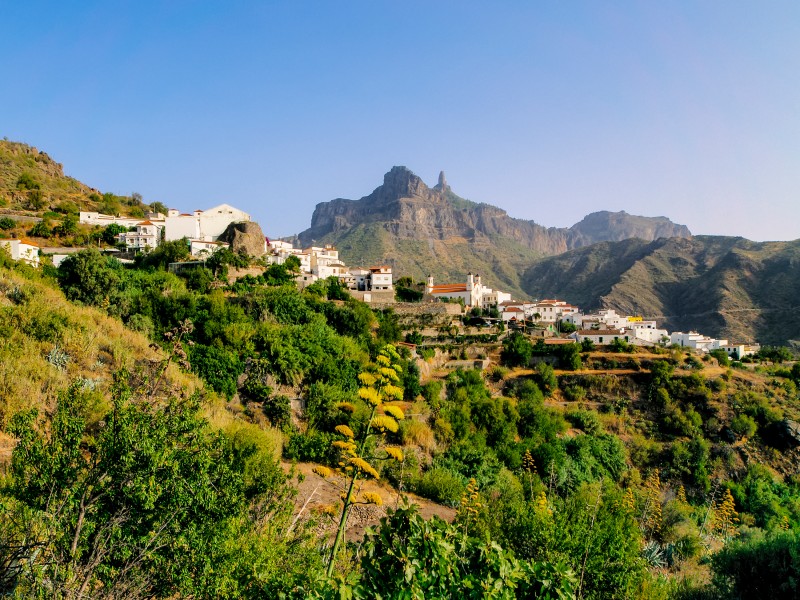 Is Gran Canaria Expensive? The Cost of Visiting the Canaries in 2023

Nestled off the coast of northwest Africa, Gran Canaria is one of Spain’s vibrant Canary Islands, best known for its black sand beaches, historical capital, mountainous landscape, and family-friendly resorts. With one of the best climates in Europe, the Canaries are a firm favorite of British holidaymakers, but is Gran Canaria expensive?

Gran Canaria is the third largest island in the archipelago and a major stop for cruise ships and duty-free shopping. It’s home to some of the liveliest beaches in Spain, with bustling hotel-lined promenades flanking its shores, but Gran Canaria is much more than its resorts. Undulating mountains, sandy dunes, pine forests, and deep gorges also punctuate the island.

The Canaries have drawn European tourists for decades with the promise of winter sun and reasonable prices, but with popularity rising, along with living costs, Gran Canaria might not be the budget destination it once was. From the flights to the food, our guide looks at the real cost of visiting the Canaries in 2023. Let’s get into it.

The average cost of a holiday to Gran Canaria

The Canary Islands have always been known as fairly affordable vacation destinations. Getting there can be more expensive than reaching mainland Spain, with a flight from Madrid taking around three hours, but this is a small price to pay for the year-round sub-tropical temperatures that you can’t find elsewhere in Europe.

The cost of living in the Canary Islands has historically been much cheaper than that of mainland Spain too, making them an appealing place for ex-pats. However, with the European cost of living crisis, everything seems to be on the rise, and the Canary Islands have recently been voted the fifth most expensive region of Spain to buy property. But what does this mean for your holiday to Gran Canaria?

When compared to other Spanish holiday favorites like the Balearics, Madrid, Barcelona, Valencia, and Marbella, Gran Canaria always comes out cheaper. Gran Canaria’s capital, Las Palmas, is also generally cheaper for food, hotels, and rent than budget-friendly cities like Alicante and Granada.

Based on the expenses of other travelers, the average cost of a holiday to Gran Canaria is around €100 a day per person, inclusive of accommodation. That breaks down to around €27 for food, and €39 for accommodation, €34 for transport and excursions. However, these expenses all depend on the nature of your vacation and who you’re traveling with. It’s easy to do Gran Canaria on an even smaller budget, but adventure seekers or nightlife lovers might end up spending more.

Before we dive into these costs any deeper, let’s take a look at the average prices for some daily expenses that you can expect in Gran Canaria:

Is Gran Canaria expensive to visit? Getting There

The only thing that could cost you more in Gran Canaria when compared to other Spanish destinations, is getting there. You might be able to include the rest of Spain on a European road trip and easily cross borders by car or train, but even though the Canary Islands belong to Spain, they might as well not be in the country.

Most big cities in Western Europe operate weekly flights to Gran Canaria, with the cheapest airfare from the UK costing around €35 one way. The cheapest month to fly is November, and most big European airlines like Ryanair, Iberia, Norwegian, EasyJet, British Airways, Jet2, and TUI all fly direct to Las Palmas from Manchester, Birmingham, Bournemouth, Nottingham, Bristol, London, and more. The average return flight from the UK costs between €60 and €160, but it depends on a few factors.

If you want to find an even better deal, look for flights with connections in Europe rather than flying direct. Many airlines will give the option to stop over in Madrid, Barcelona, and even Lisbon at a discounted price.

You can even travel by ferry to Gran Canaria. This is a great option if you’re coming from one of the other Canary Islands, but not so efficient if you’re coming from Spain. One ferry company operates charters from Cadiz to Las Palmas, once a week, but the overnight journey takes around 37 hours and costs an average of €110 each way, depending on your cabin choice and the time of year.

Gran Canaria might be closer to Morocco than Spain, but flights are less frequent. The ferry from Morocco takes around four hours, but it can be more complicated traveling this way as you’ll have to first enter Morocco and then cross the maritime border into Spain, meaning more documents and more queues.

Accomodation comes in all shapes and sizes in Gran Canaria. As the name suggests, it’s not a small island with 236 kilometers of coastline and around 1,500 square kilometers of rugged landscape. That’s around three times the size of Ibiza, so where you stay could make all the difference.

The most popular areas to base yourself on the island are Maspalomas, Puerto Rico, Puerto Mogan, San Agustin, and Las Palmas, with the liveliest resort being Playa del Ingles in Maspalomas on the southeast coast. Most of Gran Canaria’s bustling resorts are located in the southeast, which means the north and northwest could be for you if you want to do some real penny-pinching.

La Aldea de San Nicolás is Gran Canaria’s westernmost municipality. Although located in the Las Palmas province, it is on the opposite side of the island to its capital and its scattered with small fishing villages and pebbly black sand beaches. The area is the cheapest place to buy property and one of the cheapest places to stay with less development and a much more laid-back atmosphere. Still, that isn’t to say that Gran Canaria’s most popular resorts come at a high cost.

Check out some of the accommodation options below depending on your budget:

Downtown Share Apartment, Las Palmas – Save on eating out with your own private room and shared kitchen in the center of the island’s capital. Double occupancy starts from just €30 a night.

Is Gran Canaria expensive for food and drink?

Gran Canaria can be a very budget island for eating out, and there is a diverse range of restaurants. While local options will be the cheapest places to dine, some of the more high-end hotels and harborfront restaurants might burn a hole in your budget.

The average restaurant meal costs between €9 and €12 in Gran Canaria, with a three-course dinner for two people at a mid-range restaurant coming to around €35-50 on average, without alcohol. Playa del Ingles, the popular south coast resort, can be a little more expensive, with the average meal costing €16 per person, and food coming to €39 per day. To dine in La Aldea de San Nicolas, you can expect meal prices closer to €8 a dish, and daily food expenses to be around €27.

Local Canarian cuisine is influenced by traditional Spanish flavors as well as some Latin American cooking and African touches. Small dishes or tapas are served all around the island but are known locally as enyesques. They’re usually accompanied by mojo, which you might more readily associate with Mexico, but each Canary island offers its own spin on the spicy sauce.

Local meat and fish are at the heart of most Canarian dishes, while the tapas are often vegetable-heavy. You can get a tapas plate for around €3-5 on Gran Canaria, depending on where you go. The normal practice is to share around five to six plates per couple.

A pint of beer in a restaurant or bar in Gran Canaria costs around €2 on average, and some bars will even offer local beers for €1 a bottle. In the lively resort towns, drinks are more expensive with wine and cocktails starting at €5 and €7 respectively, but most establishments will offer happy hour discounts between 5 pm and 7 pm in the high season.

Honey rum is the most popular local alcoholic drink among visitors to the Canary Islands. You can find a large bottle in the supermarkets for around €9, and local bottles of wine go for around €5, but closer to €15 in bars and restaurants.

When is the best time to visit Gran Canaria?

The Canary Islands have a Mediterranean climate, but thanks to their location close to Africa and the equator, temperatures are often subtropical and the islands experience some of the hottest winter weather in all of Europe.

From July to September, the average highs hover around 80 degrees Fahrenheit, but Gran Canaria tends to be sunny and relatively warm all year round. In fact, yearly temperatures don’t fall below 60 degrees Fahrenheit, even in the cooler winter months. The island only sees around 148mm of rainfall every year, mostly falling between October and February, while June to September is extremely dry.

Strong Trade Winds blow from the northeast across the Atlantic, but Fuerteventura catches the worst of these, and in the summer, the light breeze can actually be a welcoming relief from the stifling heat in Gran Canaria.

Summer is the most popular time to visit Gran Canaria, with crowds flocking to the island as early as June and not dispersing until late September. The school holidays are always the busiest times, with Gran Canaria being such a family-friendly location. But this means summer is also the most expensive time to visit, which flight costs going through the roof and hotels raising their prices.

Gran Canaria is never going to be extortionate by European standards, but if you’re after an attractive low-season deal, consider visiting between November and March. You can expect plenty of blue skies and average highs of 65 to 70 degrees Fahrenheit, and much fewer crowds. Some of the tourist facilities won’t be in full swing, especially the nightlife hotspots. But the sea hovers at a toasty high of 70 degrees Fahrenheit, even in January, and plenty of the restaurants and resorts will be open for business.

Gran Canaria on a Budget: Our Top Money-Saving Tips

Gran Canaria might not be as much of a budget location as it once was, but there’s still no reason that your holiday has to break the bank. These money-saving tips will help you cut corners where you can and avoid unnecessary fees on your vacation to one of the liveliest Canary Islands:

How many days do you need in Gran Canaria?

If you’re limited on time, a few days in the capital, Las Palmas, and a night or two in one of the resort towns is enough time to get a taste of Gran Canaria. Still, we recommend staying for at least five to seven days to experience the best of the island, and even longer if you want to explore at a more relaxed pace.

Are there volcanoes in Gran Canaria?

Which is the cheapest Canary Island?

Tenerife is one of the cheapest Canary Islands to visit when it comes to holidays. Gran Canaria is very cheap to buy property, but it is more dynamic. The glitzy resorts can be more expensive than the average cost for accommodation in the Canary Islands at large, while the quieter fishing villages on the west coast are among the cheapest in the archipelago.

Mykonos vs Crete: Which Greek Island Should You Visit?
41 mins ago