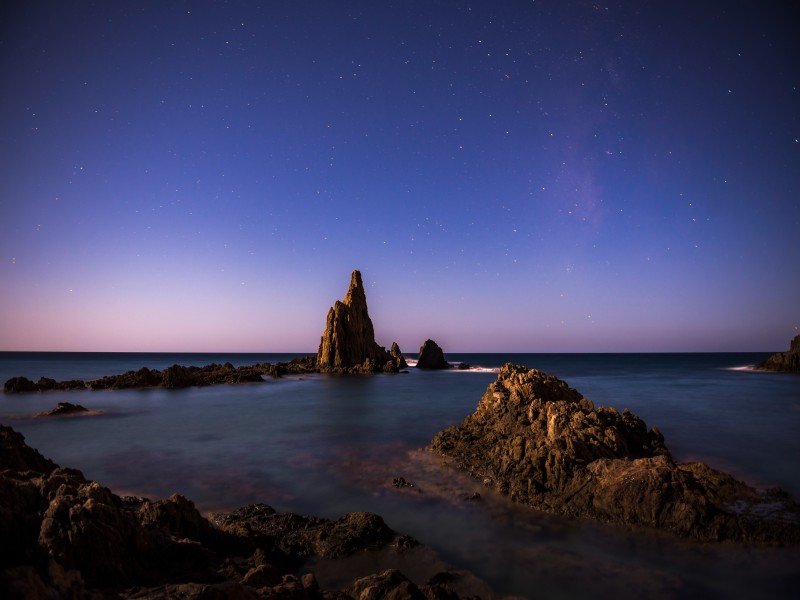 Welcome to a gritty port city and the capital of Lanzarote, often seen as just a gateway to the smoking volcanos and wild beaches in this corner of the Canary chain. However, it’s also the cultural and economic hub of Lanzarote, with museums and bars and buzzy shopping strips to reflect that. So, is Arrecife worth visiting?

That’s what this guide is here to help you with. It will run through a couple of key things about this city of 61,000 people, all to help you decide if it deserves a place on your Lanza itinerary for the coming season.

We think you might just be pleasantly surprised by what’s on the menu in the town. From salt-washed promenades with sweeping views of the Atlantic Ocean to brown-tinged urban beaches, wild nightlife hubs to fantastic public transport connections to the far-flung coastlines, there are lots of reasons you might want to consider a pitstop. So, is Arrecife worth visiting?

It’s super easy to get to

The main reason for that is the local airport. Known, simply, as Lanzarote Airport (ACE) in English and the Aeropuerto de César Manrique-Lanzarote in Spanish, it’s a mere three miles to the south of city limits. Today, it reigns as one of the busiest in the region, handling something like seven million passengers each year.

You’ll be able to pick from oodles of flights, both low-cost and premium. Many are seasonal (serving either the winter-sun boom or the summer months) while others go all year round. Some of the best bargains are to be had on Ryanair, which flies direct to Bristol, London, Turin, and many others, but there are also uber-cheap, cross-Europe links with the likes of Vueling, Wizz Air, and TUI.

You should find it a cinch to go from the arrival hall to Arrecife’s downtown. There’s an airport bus that does the trip from 6am to 10.40pm each day, taking just 25 minutes to drop you at the main bus terminal. On top of that, there are oodles of private transfer companies that offer relatively cheap links out to virtually all the resorts up the east and west coast of the island, though we’d recommend pre-booking those for peak travel times like summer and Christmas.

The city promenade is the vena cava of Lanzarote’s capital. It strings along the whole coastal part of the city, linking up the main urban beaches (more on those just below) and the buzziest parts of the downtown core in one uber-pleasant strolling path. It’s one of the best ways to navigate from neighborhood to neighborhood, but also a downright lovely place to while away your holiday days.

The northern part of the promenade can feel a little gritty and industrial compared to the south. We’d recommend skipping the areas around the main porting and start your explorations in earnest south of the Charco De San Ginés passage. You’ll spot a charming harbor from the lookout points there, with the whitewashed homes of Arrecife lining up along the shore and blue fishing skiffs jostling on the light waves.

From there, move south again and you’ll come to Jose Ramirez Cerda Park, which has a vintage bandstand and some breezy picnic spots just meters from the Atlantic. There’s a turnoff there for the walkways over to the mighty Castillo de San Gabriel, a towering citadel raised on an offshore island that’s now got some enthralling history exhibits (see below). Or you can push further south to find welcoming drinkeries like the Parador Café – coffee by the waves, anyone?

The promenade continues on past the curving arc of sand at Playa Reducto and eventually hits a finish at Parque Temático. That’s another family friendly hub with its own skatepark, playground, and picnic areas, not to mention the amazing Viejo Barco de Madera monument that showcases the remains of an old wooden ship.

Is Arrecife worth visiting for beaches? Well…maybe. There are better locations for out-and-out beach holidays in Lanzarote for sure – we can think of rugged Arrieta to the north, Playa Blanca and the stunning Papagayo reserve to the south, and the wave-bashed runs of sand in Caleta out west off the top of our heads. However, there are also plenty of fantastic sands within easy reach of this town.

Let’s start inside the city itself. There, you can pick from about four separate beaches. The best of them are to the south, where the horseshoe bay of Playa Reducto draws a big curve in the shoreline, sporting palm trees and sunbathing spots as it goes. We also love the shallow reefs of Playa del Cable and the protected beach at Playa de la Arena, where the swimming is easy.

If you’re willing to make a short trip, then oodles and oodles more bays and beaches and coves open up. You could get to the family friendly stretches of Playa de los Pocillos in less than 10 minutes. Or there are the soft, sunbather-ready sands at Playa de las Cucharas in Costa Teguise. Or go further north to hit the black-rock coves around Charco del Palo. The choice is yours.

If you ask us, the city of Arrecife is the best place to be in Lanzarote for museums and cultural exhibits. The core of the town hosts some of the most totemic collections of art and the most remarkable buildings the island can muster, ranging from 16th-century castles that were once pounded by pirate cannons to curious design homes and private art institutions.

Probably the number one museum to visit here is the Museo de Historia. That’s housed in the Castillo de San Gabriel, which sprouts from a jagged volcanic rock a stone’s throw off the aforementioned promenade. You’ll be welcomed there by two colossal wartime shell casings from WWII. Inside, you’ll learn all about the native peoples of Lanzarote, tales of corsair battles at sea, and the courses of the trading relationship between the Canary Islands and mainland Spain over the centuries.

North of that and over the main port area, you can also hit the Castillo San José. Another castle, this time dating to the 1770s, it’s since been converted into MIAC, or the International Museum of Contemporary Art in English. It was a project spearheaded by none other than César Manrique, Lanzarote’s most famous architect and sculptor. Today, the collection contains works by people as totemic as Picasso and Joan Miró.

Last but most certainly not least on this list of reasons you might want to visit Arrecife is the fact that the town is the hub of the whole of Lanzarote. Around 80% of the main bus routes that crisscross the island start or stop here. That means you’re never more than an hour away from even the most far-flung parts of this amazing member of the Canaries.

On top of that, Arrecife is replete with tour providers ready and waiting to help you book onto organized trips to see the highlights of the isle. Plus, it’s located conveniently smack dab at the intersection of the main LZ-1 and LZ-2 highways, which are the only two motorways on the island, letting you drive with ease to the north and the south.

There are some pretty tempting places to visit, too. There’s no room to list all of the incredible draws on offer in this short guide. However, here are just a few of the highlights that we think you should consider:

Is Arrecife worth visiting?

Is Arrecife worth visiting? That depends. We’d say it’s a great place to get a feel for the local Lanzarote culture and history, with enough art galleries and museums to fill a whole day’s explorations and then some. There’s also a gorgeous promenade that links up buzzy cafés and bars by the water’s edge, plus a good glut of urban beaches. The main reason we love this town, though, is the fact that it’s the transport hub of the whole island, letting you explore all the amazing volcano parks and surf beaches that Lanza has up its sleeve.