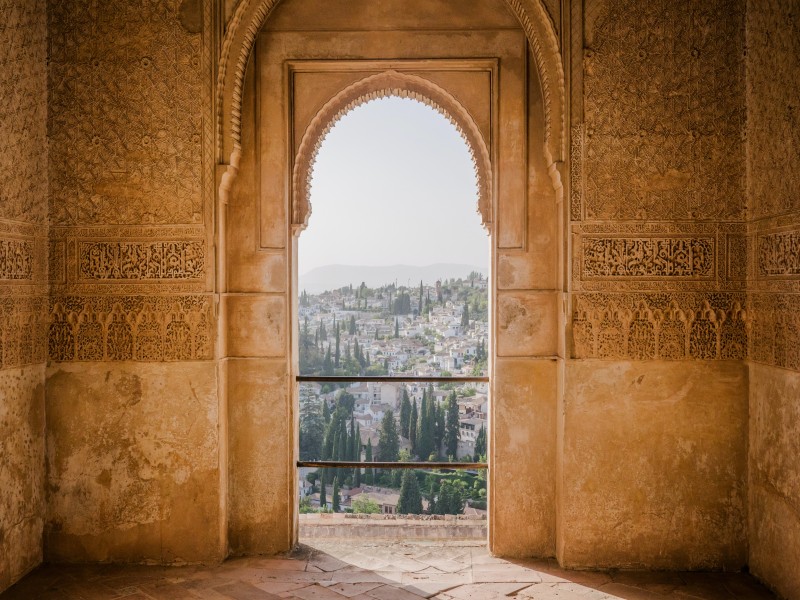 7 Of The Most Amazing Cities In Spain With Arabic Architecture

There are some seriously amazing cities in Spain with Arabic architecture. They’re places that are sure to enchant, certain to wow. They are also the product of a pretty enthralling historical tale of conquest and counter-conquest…

In a sudden move at the start of the 8th century AD, the armies of the Umayyad Caliphate moved across the Med and established control of Portugal, Spain, and even the southern reaches of France. It led to the creation of Al-Andalus, a Muslim dominion that extended across much of the Iberian Peninsula.

Today, the relics of that age, which itself spans three or four centuries, is visible in a whole load of places. There are majestic fortresses in Granada, great turret-topped churches in Malaga, and enchanting onetime mosques standing high in Toledo. But that’s just the tip of the iceberg when it comes to amazing cities in Spain with Arabic architecture…

Granada is home to perhaps the pinnacle of Moorish-era architecture in the whole of Iberia, let alone Spain on its own. Cue the Alhambra. A mighty fortress-palace complex that caps off a ridge beneath the snow-capped Sierra Nevada, it’s also been hailed as the single most incredible piece of building work in the country – a country that hosts the likes of La Sagrada Familia, no less!

The site was first conceived and raised by Muhammad I Ibn al-Ahmar, the first Nasrid emir of south Spain. It was expanded and added to and glorified over the courses of the next 300 years or more until the Christian Reconquista in 1492.

You could spend two, three, or more days lost within its confines. There’s just so much to see. As you walk up, you’ll pass under the mighty Puerta de la Justicia gates that were added in the 14th century. The Alcazaba is the oldest quarter of the citadel, containing an ancient hammam bathhouse and numerous fortification keeps. But it’s the fabled gardens of the Generalife that take center stage. They’re grand and peaceful all at once, moving from fountain-babbling courtyards to folly hedge mazes hidden deep within the castle grounds.

Malaga is much, much more than just the gateway to the Costa del Sol. The city rises from the edge of the sparkling Med with its enthralling Old Town, an area so replete with Arabic architecture that it is sure to get the cameras a-clicking and the gasps a-coming. It’s all down to the fact that the town actually went through something of a zenith in the Middle Ages, when it was the Moors, not the Christians, who ruled the roost.

You can’t miss it, really. Just look up: The Malaga Alcazaba is like a salt-washed limpet from the sea capping off its own bluff above the center. That was the fortress home of the Taifa of Málaga, a kingdom state that conquered much of the surrounding region after the 11th century. Inside, you’ll see filigreed columns in grand halls, water gardens, and even a covered corridor that links up to the even-higher Castle of Gibralfaro.

Down below, it’s back to the Malaga Old Town for more Mudejar treats. They include the Cathedral of Málaga, now a Roman Catholic church but one with distinctly North African flutings and filigrees. From there, hit the winding, weaving lanes that recall the medinas of Fez and Marrakech more than they do the grand boulevards of Barcelona.

Don’t doubt that Córdoba deserves a place on any list of the most amazing cities in Spain with Arabic architecture. The erstwhile capital of the Umayyad Caliphate, the city was the beating heart of Al-Andalus and one of the leading centers of medicine, philosophy, and theology for some 400 years, not to mention one of the largest medieval cities in Europe throughout the 10th century.

A UNESCO World Heritage Site tag hardly does it justice. This town is rammed full of Spain’s greatest Moorish treasures. They come in the form of the Mezquita-Catedral de Córdoba, a sprawling former mosque that’s laced with arabesque archways and latticework displays that would look right at home in Babylon. Around that swirls a town of narrow alleys that once hosted upwards of 300 Muslim worshipping centers.

We’d also recommend planning an outing to the Medina-Azahara complex. It’s just on the outskirts of Córdoba, where the Spanish sierras begin to rise to the sunny skies. Within, you’ll see stunning archway bazaars and old trading centers that must have bustled with life and traders from North Africa and the east in their time.

Zaragoza’s been making waves in recent years. It hosted the international Expo fair back in 2008 and was the European Capital of Culture in 2012. It’s also home to a resident crowd of youthful students, many of them attendees at the University of Zaragoza, one of the most prestigious in the whole country.

But the town is anything but modern. Once known as Roman Caesaraugusta, it was first settled sometime in the age of Augustus Caesar. Later, the Arabs came and turned it into a hub of the Upper March of Al-Andalus, bringing muscular castles and elegant mosques to bear on the center.

In fact, much of the architecture seen today is dedicated under the UNESCO World Heritage Site of the Mudejar Architecture of Aragon. It includes the wonderful Cathedral of the Savior of Zaragoza, also known as the La Seo de Zaragoza, and the indomitable Aljafería citadel, which is surely one of the most striking remaining examples of military Spanish-Islamic architecture left in the country.

No list of the most amazing cities in Spain with Arabic architecture could possibly be complete without at least a nod towards Seville. The eye-wateringly-wonderful capital of Andalusia is a seriously fantastic place for history buffs and culture lovers. It sports such grand architectural pieces and urban art that you won’t be short on things to wow.

A case in point: The Seville Alcázar. Once the fortress of the Muslim Almohads of the 11th century, it’s a whole complex of palaces and court rooms that’s centered on idyllic gardens with babbling fountains and riad-style tilework. From there, survey the skyline to find the gorgeous Giralda tower, which was built as a minaret for a mighty mosque in the 12th century.

To be honest, that’s just scratching the surface. You can fill day after day seeking out remnants of the Moorish period in this town. That is, if you can peel yourself away from the taste-bud-tingling tapas joints and the lively beer bars that spill into the old streets.

Not to be confused with its namesake over the pond in the Buckeye State of Ohio, Toledo, Spain, comes with a lacing of architecture that belies the fact that it was once one of the richest Arab cities in the whole of Al-Andulus, the name for the whole area of Muslim rule in Iberia.

Initially, the place fell into sharp decline as the capital of Al-Andulus was moved to Córdoba in the 700s AD. However, that all changed with the establishment of a new Arabic kingdom known as a taifa with Toledo (then called Tulaytulah) at its center. Today, relics of that great age can be seen in the Mosque of Cristo de la Luz, one of 10 mosques that was built here, and the ruins of the Baños de Tenerías, the remains of an opulent hammam and bathhouse complex.

These days, UNESCO-tagged Toledo is one of the most popular day-trip destinations from Madrid. You can get there in less than 35 minutes on the local trains to lose yourself amid the maze-like center and the Moorish architecture. It’s also a top place for foodies, being the de facto capital of Castile–La Mancha, the home of a certain Manchego cheese!

Cádiz isn’t just a famous Moorish city. It’s also one of the oldest continuously inhabited cities in Europe. Historians generally agree that it was founded sometime around 1100 BC, by Phoenician Greek settlers out of the eastern Mediterranean. The town would have to wait another 1,800 years before it passed into the sphere of influence of the Arabs, who overthrew the Visigoths in 711 AD to claim the port they then called Qadis.

Today, the remainders of that age are mainly Mudejar buildings – a fusion of Moorish and Christian styles from later times. They rise from the streets that were laid out by the Romans many moons before, in the form of the Gran Teatro Falla, a Neo-Mudéjar construction with multicolored window arches, and the medieval homes that line the old city, which sport sculpted cupolas and flattened roofs.

We’d say Cádiz is a cracking choice if you’re keen to seek out examples of early Moorish architecture but also want something off the beaten track. This town is often overlooked by travelers, but it has a buzzy student scene, loads of tapas joints, and access to rare surfing beaches on the Atlantic-facing south coast of Spain.

The most amazing cities in Spain with Arabic architecture – our conclusion

There’s certainly no shortage of amazing cities in Spain with Arabic architecture on offer. Caliphates once ruled the vast majority of this nation, and they brought unique building works with them alongside an injection of eastern culture and heritage. Today, the offering ranges from the grand and the glorious – the citadels of Granada and Seville – to the enchanting and fairy-tale – the old towns of Toledo and Cádiz.

How Long Can You Stay in Spain as a Tourist? The Ultimate Visa Guide

Is Gran Canaria Expensive? The Cost of Visiting the Canaries in 2022

Nicosia Itinerary: Three Days in the Cypriot Capital
11 hours ago

The Ultimate Guide To Stray Dogs In Cyprus: Safety And More
1 day ago