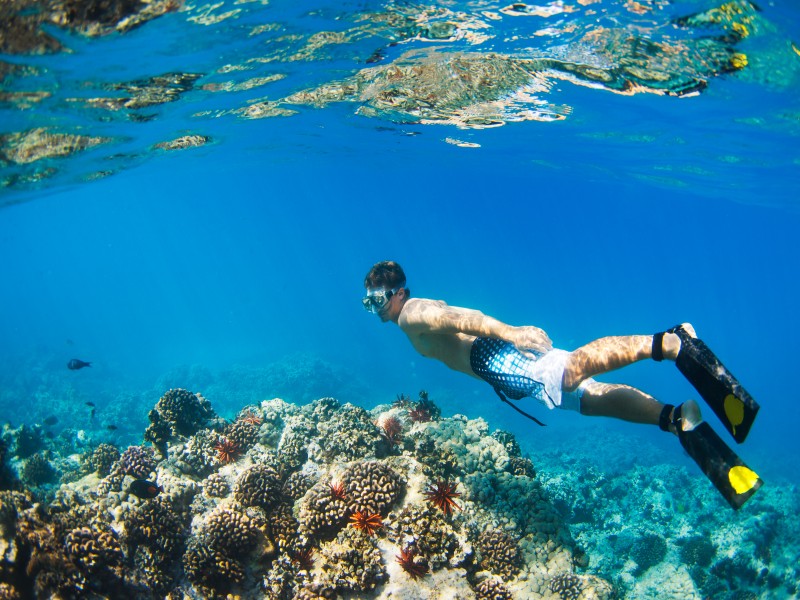 The 7 Best Snorkeling Spots Gran Canaria Has On Offer

So, you’re on the hunt for the best snorkeling spots Gran Canaria has up its sleeve? Let’s just say that’s not likely to be a difficult search. The third largest of the Canary chain isn’t hailed as a mini continent for nothing. It’s blessed with stunning landscapes and some of the most eye-wateringly wonderful coastline in Spain, not to mention oodles of swimming coves and beaches to boot.

This guide will scour from the wild and untrodden north shorelines to the resort-dotted south, from the fishing villages of the east to the rugged, cliff-backed stretches of the west, all on the hunt for the very best places to pull on the snorkel and go a-looking for Atlantic marine life.

We really don’t think you’ll be disappointed with what’s on offer. Nope, the best snorkeling spots Gran Canaria can muster run the gamut from romantic inlets where you can spot sea turtles with your other half to craggy underwater reefs where angel sharks might even make an appearance. Let’s get started folks…

Amadores Beach is the premier option here; arguably the best of all the best snorkeling spots Gran Canaria can offer. Why? There are human-built breakwaters and jetties ringing the whole bay, which cuts swell to a minimum, even in the stormier winter months. That keeps visibility sitting at an enticing 25 meters or even more.

Because of the manmade swell protection, access is also super easy. Just stroll down the white sand and paddle out wherever you like. Regular sightings include big sardine schools that move like wisps of silver underwater, cuttlefish, and even rare angelfish.

The downside with Amadores Beach is that it lacks that raw ocean energy of some other spots. Yes, that makes it calm and good for beginners. However, it also keeps larger marine species like rays and sharks out of the main bay, so don’t come here expecting a full-on saltwater safari.

Only three miles up the southwestern shore from Amadores Beach, Puerto de Mogán is a fine alternative that’s often just a touch less busy than its popular snorkel compadre. We love this one because you’ll get to explore one of the prettiest villages on the island before diving in to meet the marine life.

Yep, Puerto de Mogán itself is a gorgeous little collection of whitewashed townhouses strewn with bougainvillea and cut through by canals and walkways. It’s not for nothing that it’s hailed as Little Venice! There’s also a bustling marina filled with bobbing yachts and lined with cafés.

Once you’re done exploring the photogenic streets, hop down to the shoreline and make for the south side of the main beach. You’re after the point that’s beyond the rocky jetty known as Punto Panoramico. It’s enfolded by high cliffs and is all rocky, which ups the visibility. In the water, you can see cuttlefish and even sea turtles. A swimming buoy is recommended because there’s regular boat traffic.

Calling all would-be snorkelers looking for a spot on the doorstep of the big city of Las Palmas de Gran Canaria – Playa de las Canteras has you covered. This is one of the main urban sand stretches that line the town on the northern tip of the island. It’s abuzz with life most days but is long enough to absorb big crowds.

Yep, there’s a whopping 2,000 meters of coastline to get stuck into here. You can choose pretty much any entry point along the length of the bay. It’s all sandy and easy to access from the promenades behind.

The kicker is the La Barra de las Canteras, a long reef system that helps to protect the inside of the beach from dominant swells, meaning you get good visibility and calm waters most months of the year. On the downside, those outer reefs, plus the crowds, mean that larger sea creatures like sharks and rays don’t often make an appearance.

Taliarte would be our pick for a family snorkeling day out in Gran Canaria. It’s a lovely little dash of cinnamon-tinged sand that runs beneath a small resort on the east coast. The shape of the shoreline here, with good headlands extending to the north, means that most of the strongest, wind-driven currents and swells are tempered. That helps with visibility in the water, but also makes it a decent place for less-experienced swimmers to find their H2O feet.

Couple that with easy access and a patchwork of sandbanks and small reefs and you’ve got surely one of the best snorkeling spots Gran Canaria can offer folks with the kids in tow. Uber-beginners can stick to the easy spots around Playa de Melenara to the south. Those wanting to push themselves and potentially spot larger fish can swim along the reefs around the Taliarte Pier Swimming Area further north.

The reefs and rocky inlets of Risco Verde have risen to become one of the most popular snorkeling locations in the whole of the Canary chain in recent years. There’s good reason for that. First, they are really accessible – just a few steps off the promenade of Arinaga marina and you’re in the water. Second, they offer glimpses of more exotic sea life than many of the other spots on this list.

Risco Verde is located on the southeastern shoreline of Gran Canaria. As such, it’s well protected from the big NW Atlantic swells that come in during the winter months from the open ocean. That makes this a decent year-round option, though waters can be a touch choppy when there’s a high summer easterly bound from the Sahara.

We’d recommend starting on the northern side of the bay along the Risco Verde headland itself. That’s the shallowest part of the reef, an area that attracts all manner of multicolored fish, but also groups of stingrays, which you’ll need to keep your eyes peeled for as they often rest under a blanket of silt on the seabed.

Tufia is one of the remoter of the best snorkeling spots Gran Canaria can offer. It’s up on the eastern coastline, only a couple of bends along the main highway north of Gran Canaria Airport. The town itself is tiny – just a collection of salt-washed fishing cottages on a perch above a deep bay. Access to the water is down steep steps and then over a narrow channel of sand.

The piece de resistance of Tufia has to be the relatively shallow reef ecosystem that fringes the south side of the headland. It’s a veritable haven for smaller fish that can’t deal with the big swells of more exposed locations – even octopi have made an appearance!

Tufia isn’t likely to be as busy with other swimmers or snorkelers as, say, Puerto de Mogán or Amadores. That’s mainly because it’s further from the bigger resorts and most travelers will need a rental car to get there.

Once the site of a relatively bustling port area that handled the import and export of foodstuffs to the island, pint-sized Sardina has happily mellowed in recent decades as the east coast rose to more economic importance. It’s certainly been good for the holiday vibes in these parts. And for the snorkeling…

Yep, there’s now some excellent underwater explorations to be had in Sardina thanks to the drop in boat traffic. We think it hits a zenith on the north side of town on the sand run of Sardina del Norte (also known as North Beach). Look for it just below the main highway as it bends out of the center and under the cliffs.

A clutch of rock reefs and submerged boulders along the edge of the sands here act as the perfect habitat for animals like octopus and urchins. It’s also possible to spot larger rays and groupers if you’re a strong enough swimmer to head a touch further out. Talking of which – be wary of the waves since this spot can get hit with the brunt of the NW swells in winter.

Truth be told, there are oodles and oodles of places that could claim a position on our list of the best snorkeling spots Gran Canaria can offer. This island boasts a whopping 147 miles of coastline on the wild Atlantic, after all! We’ve picked out seven locations that we think really trump the lot here. They range from protected marinas in the west, where manmade breakwaters help to up visibility for much of the year, to wilder east-coast harbor towns that are known to host angel sharks and octopi.