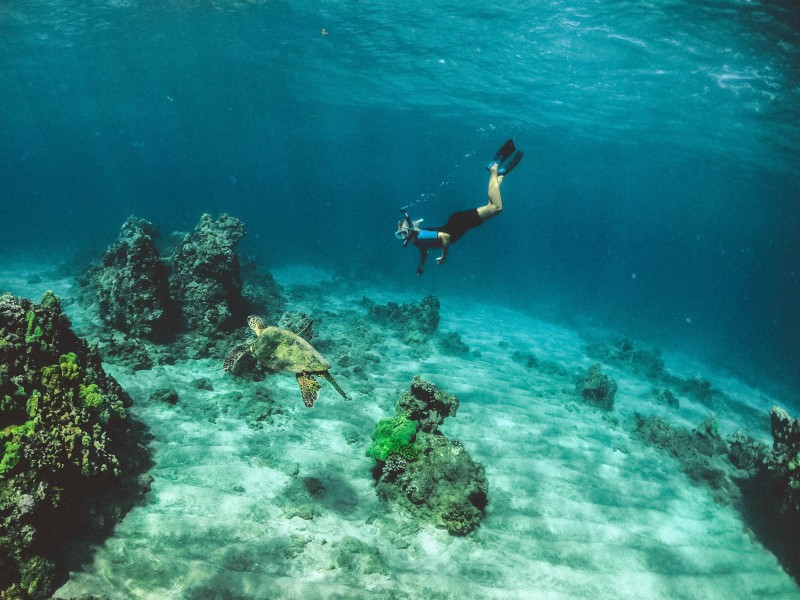 The 7 Best Snorkeling Beaches In Menorca For Water Lovers

This guide to the best snorkeling beaches in Menorca runs through a montage of the finest sands and bays this small member of the Balearic chain can muster for holidaymakers with the goggles and the bubble tube in tow. It’s essential reading if you were hoping for an encounter with a Mediterranean turtle or strange octopus between your sessions in the Spanish tapas restaurants.

Our collection of places tries to offer something for different levels of snorkelers and swimmers. We’ve got remote bays where you can drift right out to see the deep drop off into the Med proper. But there are also family options with shallow sand shelfs that should be better for the little ones.

Remember that the best time to go snorkeling in Menorca is during the peak holiday season of the summer. The months between May and August might see the biggest crowds on the island, but they also have the clearest seas and the stillest swells.

Cala Morell is a bay that’s patchworked with a whole symphony of colored rocks. There are pink-tinged stones that jut out into the Med and shimmering white stacks that rise overhead to even more shimmering whitewashed villas perched on high. Lots of people come here to see the strata of the cliffs, which reveals sedimentary layers and all sorts from the island’s 400 million years or so of geological past. Others come for the snorkeling…

It’s particularly good in these parts thanks to the still seas that are protected by the natural headlands. There’s one at the east end of the bay that’s high and muscular and a smaller one that forms a sort of natural harbor on the western side of the bay. A sand-bottomed channel cuts right through the middle to make it easy to access to the rock caves and reef sections that fringe all sides of Cala Morell.

We also love that this spot is hidden up on the lesser-known northern coast of Menorca. It’s about six clicks out of the historic port town of Ciutadella, along wild country roads that are hemmed in by farm fields. The area around the beach is mainly residential but there is just one eatery – the Ivette Beach Club – that offers chic lunches with views of the sea.

Cala Macarella isn’t just one of the best snorkeling beaches in Menorca, it’s one of the best beaches on the isle full stop. Yep, prepare to be stunned by the sheer majesty of this south-coast cove, which doglegs inland through walls of whitish rock to a tiny dash of pebbles. As it goes, it’s fringed by hardy coast trees and gnarled silvestre olive trees, which combine to add a lush, piney smell to the whole area.

Snorkelers can get as brave as they like here. It’s possible to stick to the shallower and more protected areas at the base of the inlet, but you can also paddle out further into the main channel to see the wavier spots where the big fish congregate nearer the open seas. If you do choose to do that, be sure to have a tow float attached, as boats and yachts regularly sail in and out of Macarella.

There’s lots to be spotting when you dive down. The varied mix of shadowy sea caves and sandy bottoms means that this corner of the island attracts a plethora of sea life. Big, orange starfish often cling to the shallows while sea turtles and eels are regular inhabitants of the shadowy nooks and crannies of the seawall.

Cala Mitjana has a rep for being one of the most fantastic beaches on the island. That’s for good reason. Located just south of Cala Galdana on the south coast, it’s a thing of pure beauty – think shimmering white sands mixed with pebble and turquoise sea waters aplenty. Most of all, though, people come because the spot is hidden away from any main roads, through groves of hardy olive and pine trees. It’s often much less busy than other hotspots that have direct car access.

Once you’ve hiked the short, 10-minute trail from the lot, you’ll be greeted by a wide bay with undulating walls of chalk-white cliffs. The H2O is famously clear, glistening more like a swimming pool than an open inlet on the Mediterranean Sea. That’s actually why the snorkeling is so good, since the visibility can crank up past 20 meters and there are rarely strong waves about.

Cala Mitjana boasts a narrow sea cave and clusters of natural rock reefs. They host all manner of small fish, but also bigger species like moray eels and octopi. If you manage to push out to the drop zone at the outer rim of the beach, you might also find schools of sardines wisping back and forth in the darker, cooler waters.

The trio of small inlets that makes up Cala Tamarells is definitely one of the best snorkeling beaches in Menorca if you’re keen to get off the beaten track. There’s just nowhere near the same level of crowds here in the peak of the summer months as you get out west and down on the south coast. That’s largely because of the enticing isolation of the spot, requiring a hike through thick coast woods to arrive.

A part of the greater Albufera des Grau Park, a nature reserve that protects a whole swathe of the Menorcan east coast, Cala Tamarells has clear and pristine waters. Below, you’ll find dashes of the native Mediterranean seagrass swaying this way and that in the light currents. That’s a favorite habitat for colorful small fish and even sea turtles, but it’s not unusual to spot larger species here, too, in the form of groupers and barracuda.

Real adventurers should remember that Cala Tamarells is a pitstop on the long-distance GR 223 walking route, known colloquially as the Cami de Cavalls. That can take up to 13 days to complete in all and this little beach with its unbusy sands and snorkeling coves is considered one of the highlights.

Divert from the usual stream of white-sanded beachfronts and idyllic coves to find the postbox-slit of a bay that is Cala Rafalet. It’s located on the far southeastern coast of Menorca, cutting inland through crumpled rocks and ridges that rarely get to more than two meters apart at their widest point. The water between them, though, is a crystal-clear cobalt blue. AKA: perfect for snorkeling.

We’d say that the spot lends itself to more advanced snorkelers on account of how tight the paddle channel gets. You’ll need to be used to keeping abreast of the shape of the overhanging cliffs both above and below the surface. The reward will be curious reefs that are filled with all sorts of smaller marine creatures, from spiky urchins to strange anemones.

Cala Rafalet does also open out into something much wider at its eastern end where it meets the Med proper. You can skirt the cliffs to the south of the bay there to spy out larger animals. Others might prefer to go in the other direction, where there’s a speckling of tidal pools where the little ones can meet the sea life without even having to pull on the snorkel pipe and the goggles.

True to its rep as one of the top family-friendly beaches on the isle, Cala en Porter also comes in as one of the best snorkeling beaches in Menorca with stuff for all levels of water baby. You’ll find it topped by the glitzy Club Menorca and oodles of other stylish hotels on the south coast, cutting inland into a stream entrance a little west of the airport.

Never snorkeled before? Don’t worry: There’s a very wide sand shelf here that means things stay nice and shallow for a long time. In fact, it’s possible to wade out almost halfway into the bay without dropping below your waistline. That’s a gift if you’re just trying to find your feet (or should we say flippers?) below the surface.

More advanced snorkelers and seasoned swimmers still have lots to get through. The fringing of urchin-speckled rock reef that runs below the bars on the western side of the bay is great for seeing sardines and angelfish. You can also swim right out to witness the big drop at the entrance of the whole of Cala en Porter, though we would recommend a tow float to help the boats see you if you’re planning on that.

Last but most certainly not least is a bay that’s fast rising up the rankings to become hailed as arguably the most celebrated snorkeling spot in the entire of the Balearic Islands. Cue Cala Son Xoriguer. A sort of extension of the bustling resort town of Cala en Bosc, the beaches here are prime territory for those with the flippers and the goggles in tow.

We say that because they are separated by a rugged peninsula, the Punta de sa Guarda, which is a veritable playground for groups of warm-water reef fish. That quickly turns into the wide sandbank of Playa de Son Xoriguer itself, which is where the beginner snorkelers should stay, paddling over clusters of seagrass and the occasional fish-patrolled rock groups.

You can see all sorts in the aqua here, from large and colorful octopi to snapping crabs and slinking eels. Mainly, though, we like the accessibility. There’s parking just behind the main beach and there’s no nasty rocks to navigate before you dive in.

The best snorkeling beaches in Menorca – our verdict

The best snorkeling beaches in Menorca are all over, from the south to the north, the east to the west. That means you shouldn’t be short on options no matter where you’re staying. Generally, we’d say that the ones on the western shoreline are better for more advanced swimmers and seasoned snorkelers, since they are remoter and tend to have more exposure to the open seas. The south coast is better for beginners, though, especially since many of the snorkel locations there are within striking distance of major resort towns.