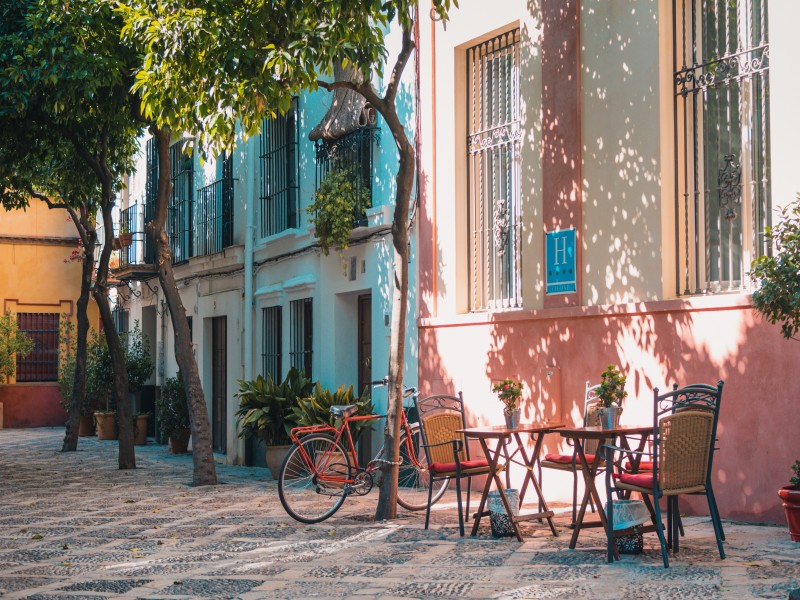 The 7 Best Places To Visit In Spain In December

We are about ready to take a vacation at any time of the year, but there’s no denying that there’s something different about a winter getaway. Maybe it’s spending the holiday season all bundled up from the cold, or it could be escaping the cold altogether and coming home with a nice tan! It may surprise you to know that in Spain, both of these are possible. We’ve got the best places to visit in Spain in December coming your way, so don’t go anywhere just yet!

Your mind might jump to bustling cities and beautiful beaches when you think about Spain (you wouldn’t be wrong!), but the country has so much more to offer. From historical towns filled with ancient history to vast mountain ranges… there’s even skiing in Spain if you would believe! If the amazing landscapes aren’t enough to convince you to head on over, then just think of the tapas. Patatas Bravas, Croquetas, Gambas Al Ajillo, need we say more???

Believe it or not, December is a fantastic time to head to Spain, some of the best places to visit are less crowded AND cheaper than the summer, plus there’s all the awesome Christmas festivities! Our epic list has wintery destinations (for those of you who prefer a more traditional holiday scene), city breaks, and some more coastal destinations because life’s a beach (even in December). Here they are:

Madrid is a must-visit any time of the year, but in December, you’ll have a tonne of Christmas activities to enjoy. The whole city gets a makeover for the holidays with magical Christmas lights galore. The city even has a Christmas-themed double-decker bus A.K.A the Navibus (we’re not kidding), that weaves in and around the city center giving you the best view possible of the holiday lights!

Christmas markets should be at the top of your list if you find yourself in Europe over December, and Madrid has a few for the books. The city’s biggest and most famous Christmas market can be found in Plaza Mayor and is a favorite amongst tourists AND locals (that’s how you know it’s good). The sprawling market has over 100 stalls with everything from hand-carved nativity scenes to crazy hats! If you happen to be in Madrid at the beginning of the month, then the annual Santa Claus Race is well worth a watch. Thousands of Santas participate to raise money for charity, and if you’re a keen runner yourself, you could give it a go!

Madrid is cold and dry in December, with temperatures hovering around 50 – 59°F. You’ll want to pack lots of layers and a nice coat to keep you warm as you wander around the Royal Palace of Madrid and the Palacio De Cristal! December flights to Madrid are more expensive than the rest of the year, but if you book early enough, you’ll be able to find reasonably priced flights and accommodation.

Barcelona is one of the best places in Spain to visit in December. Don’t get us wrong, this city is fantastic at any time of the year, but the colder temperatures halve the number of tourists visiting the city. You’ll get to see top sights like La Sagrada Familia, Casa Batllo, and Barri Gotic, without the hoards of other people *does victory dance*. The weather is pleasant with plenty of winter sunshine and temperatures between 50 – 59°F.

As for the holiday festivities, Barcelona won’t disappoint! The city streets get decorated with lights over the holidays, and Christmas markets begin popping up all over town! Santa Llucia Fair in the gothic quarter (Barri Gotic) is the oldest Christmas market in town with over 300 stalls and has roots that date back to the 1700s! While you’re there, make sure to wander over to Place de Sant Jaume to get a peek at their annual (and sometimes controversial) nativity scene.

December is also a great time to catch a game of soccer at Camp Nou as La Liga is getting in full swing. If you don’t find yourself in the city on a match day, then taking a tour around Europe’s biggest stadium is a great way to spend the afternoon and a must for any soccer fan. Unsurprisingly, this time of the year is perfect for trying some traditional Spanish holiday dishes! Some traditional Catalan dishes to be on the lookout for are Turron (or Torro), Escudella I Carn D’olla, and Canelons.

We’ve got another stellar city break for you, this time in the capital of Andalusia – Seville! While this city might seem like the perfect summer destination, let us tell you all about why it’s one of the best places in Spain to visit in December. In the summer the city is extremely crowded and temperatures can reach a sweltering 97°F. In the winter, on the other hand, the city will be less crowded and the weather is surprisingly mild, reaching up to 62°F! Some might even say it’s warm enough to enjoy a coffee outdoors in a sidewalk cafe. How charming!

The city also has plenty of traditional holiday events going on during the month. There are plenty of Christmas markets to choose from, but for the cream of the crop, head to Mercado Navideño de Artesanía for handmade toys, clothes, and ornaments! Once you’ve had your fill, head to a nearby tapas bar to warm up with some Seville favorites – like pork in whiskey sauce and a glass of local sherry. If alcohol isn’t your jam, get cozy with a cup of hot chocolate and some churros instead.

One of the highlights of Seville is buying local sweets and baked goods from the local convents, but for a real treat (pun intended), plan to be in the city for the second week of December. This is when the nuns, who normally stay secluded for the rest of the year, host a huge bake sale in Real Alcazar, a beautiful palace with Gothic, Renaissance, and Mudejar influences. Some other architectural masterpieces to see in Seville are the Seville Cathedral, La Giralda, and Plaza de Espana.

Now to take care of you snowbirds. Of course, anywhere in the Canary Islands would make a wonderful December getaway. But, we’re picking good old Gran Canaria as this is the hottest island over the winter. December temperatures in Gran Canaria can reach up to 71.6°F (don’t mind if we DO), so spending your holidays on the beach isn’t so far-fetched after all! While this month is considered as a high season on the island, you won’t find big crowds until a couple of days before Christmas, lasting well into the New Year. Because of this, if you plan to spend your Christmas day sunning it up, we suggest you book your tickets early.

Gran Canaria isn’t your typical holiday season destination, so if you’re looking for tradition, look elsewhere. This place is more about snorkeling in the ocean (still possible in December but you may want some extra layers!), dolphin and whale watching, and lounging on the island’s golden sand beaches. If you’re a hiking fanatic, there are some great hikes, and for a romantic walk, head to the Maspalomas Dunes at sunset!

There are still some holiday-themed activities, however! For a truly unique nativity scene, you HAVE to check out the sand sculptures at Playa de las Canteras. Imagine Mary, Joseph, and baby Jesus, but… all carved out of sand! Now that’s seriously cool. Another great thing about Gran Canaria over December is that if you do decide to stick around for Christmas, lots of restaurants stay open to serve Christmas Dinner, they even serve tourist-friendly roast dinners on the big day. It’s awesome.

This well-known summer party destination may not be the first place in Spain that comes to mind when you think “December getaway”, but actually, it’s a fantastic place to visit! The holiday season in Costa del Sol is full of festive activities and events, and to make it even more attractive, temperatures hover around 62.6°F on average *whips out bikini*. Every town has a lot going on over December, so no matter where you decide to stay, there’ll be plenty to see and do. Best of all, since the high season is in June, July, and August, spending December in Costa del Sol means fewer crowds, lower prices, and less stress!

Malaga is the regional capital of the area and the most famous town. This means if you want the most festive activities, this is the place to be! But, it does mean that it will be the busiest town. One of the top activities in Malaga is to see the lights at Calle Larios, the lights are suspended high above the street (which is a great place for finding some last-minute Christmas gifts), and if you visit in the evening, you’ll be treated to a light show which is accompanied by some festive music! Taking a tour of the nativity scenes is another great way to get into the holiday spirit, every little town and village along the Costa del Sol coast has them, but Malaga has by far the most.

If you’re not in the mood to do something Christmas-related (you Scrooge!) then the mild weather over winter in the Costa del Sol means you can still enjoy the regular activities. Think seaside dining, horseback riding, hiking, golf, and exploring nearby villages. There’s lots to do, even at this time of the year.

We couldn’t write a list of the best places in Spain to visit in December and not include somewhere with a lot of snow! That’s right, even in Spain, there are places to get your snow gear on, whether it’s for skiing, snowboarding, or a classic snowball fight. The Pyrenees mountains in Aragon have some of the country’s best ski resorts, and in December, there should be enough snow to spend a couple of days whizzing around the slopes.

Candanchu is the highest ski resort in the area and is known for being the oldest ski resort in Spain! There are slopes to suit every skill level and over 27 ski lifts and around 40km of marked pistes. If you’re looking for a bit more of a “nordic feel” to your December getaway or are worried about the chances of the weather (or lack of) ruining your vacation, then you should head to Panticosa. The resort sits at over 1600 meters above sea level, and artificial snow keeps the slopes open even if there’s a lack of snowfall.

If you’re not a skier, then don’t fret, as other activities include cross country skiing, snowshoeing, ice climbing (not for the inexperienced), mushing, and snowboarding!

If you’re someone who goes off the beaten path and prefers exploring lesser-known destinations, then might we suggest Avila?

Avila is a breathtaking Medieval city located around 100km west of Madrid. The Old Town is surrounded by iconic stone walls and turrets that were built as far back as the 11th century to protect the city from the Moors. While this historical city is incredible to visit in the summer, December can also be an amazing time! The weather is crisp and cool, with temperatures that range between 32 and 48°F on average, and only five days of rain over the month.

Some of the best things to do in Avila are walking along the ancient stone walls, visiting the historical cathedral (which is one of the oldest Gothic cathedrals in the entire country), and getting lost in the narrow streets of the Old Town. December brings lower prices and fewer crowds, and the city gets decorated with festive decorations and lights so you can still get into the holiday spirit!