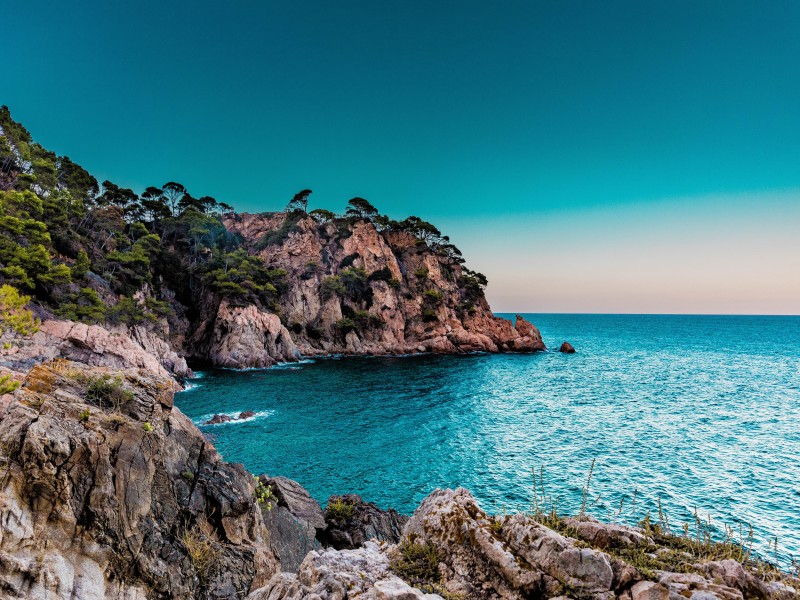 Best Places In Spain To Visit In July: 7 Top Destinations

There are countless choices when it comes to the best places in Spain to visit in July. Then again, what would you expect of one of Europe’s top summertime vacation destinations? Yep, a whopping 10.5 million people visit this country in any normal July. They come for the scorching sunshine, the good vibes, the history, the culture – the list goes on and on and on.

Want to join them? We can hardly blame you. There are some seriously alluring destinations in the mix, from sierra towns painted in blazing white to island destinations where the waves roll into wide beaches for the surfers.

Our guide to the best places in Spain to visit in July aims to whittle that long list of potential places down to a bite-sized seven options. We’ve gone for an eclectic mix, what with cityscapes and rugged coastlines, hidden highland villages and Basque Country culinary hubs alike. Happy travels…

Dubbed the rugged coast for its rock-ribbed veneer and endless coves and pebble inlets, the Costa Brava trumps all the other costas that run the length of the Spanish Med. It’s replete with cracking beaches and beach towns, which don’t have the ridiculous levels of development you get further south. But it’s also got oodles of culture and style.

Yep, the gateway to the Costa Brava is no other than the big city of Barcelona. That’s a bucket-list-buster if there ever was one. Hit the Gothic Quarter to wander ancient alleys and shop in art galleries under the gaze of La Sagrada Familia church. Strut your stuff down Las Ramblas to people watch on one of Europe’s most iconic boulevards.

When it’s time to ditch the city streets, we can recommend heading north to the small town of Sant Martí d’Empúries or Platja de Riells, which come fringed with powdery arcs of sand. Even more dramatic are the pine-ringed beaches of Platja de Santa Cristina and Cala Rovira – the best that Catalonia has if you want our humble opinion!

Here’s seven destinations for the price of one! Yep, the Canary Islands are a whole chain of rocks in the Atlantic Ocean that offer something a bit more exotic than the mainstay places of mainland Spain. They’re actually closer to Morocco than to the Costa del Sol – the flight down on its own is usually about 4.5 hours!

What’s great about the Canaries in July is that it’s not actually peak season. Most people look to this distant archipelago for their dose of winter sun. That means it hits its most expensive and busiest point in the middle of the winter months. Come July, the crowds aren’t as bad as they are in Malaga and Marbella et al. What’s more, temperatures tend to be a bit more bearable than they are in the Mediterranean – you’re looking at consistent mercury levels in the low 20s C (around the low 70s F).

The real decision here will be what Canary Island to visit. We’ve got a bit of a soft spot for the rugged landscapes of Lanzarote out east. It’s a place carved up by volcanic lava and dotted with cool surf towns like Caleta. However, others might like the hiking that’s on offer on Tenerife, the white-sand beaches of Fuerteventura, or the more off-the-beaten-path villages of little El Hierro.

San Sebastian is the jewel of northern Spain. It’s only a stone’s throw form the French border and showcases the cream of Basque Country culture through its unique cuisine (a type of small-dish tapas that’s known as pintxos), architecture, and day-to-day life.

But we think it’s worth a place among the best places in Spain to visit in July simply because of where it is. Seriously, the setting is fantastic. You’ve got the ultra-green foothills of the Pyrenees mountains to the south and east. There are the gleaming waters of the Bay of Biscay to the north, beaches arched like scythes of golden sugar around them.

The proximity of all that nature has made San Sebastian a doozy for surfers and hikers. What’s more, the midsummer is a top time to hit the water if you’re a beginner on the board and the trails up high look great when the wildflowers are blooming. Back in the town itself, you’ll want to stay somewhere around the bustling Plaza de la Constitución, which is the heart of the old town at the eastern end of the famous urban beach.

Granada is one of the most enthralling cities in all of Andalusia. We love it because it has one foot in the sierras; the wild, sometimes-snow-topped Sierra Nevada, where bald peaks beckon hikers and forests thick with the scents of oleander and thyme roll down to empty valleys. To put it another way: It’s not your usual sand, sea, sun romp to the Costa del Sol.

But before you head out to explore the ridges of the greater region, be sure to set aside some time for Granada itself. The glorious Alhambra complex tops the town. That fuses arabesque architecture from the Middle Ages with elaborate gardens and Christian iconography to create what’s certainly one of the most amazing sites in Spain.

The city that spreads below that is a rambunctious mix of student town and historic center. It’s a place where tiny cerveceria (beer bars) linger down the alleys and where enticing tapas bars spill out onto the street corners.

The Festival of San Fermín brings the legendary bull run to Pamplona in early- to mid-July (6th-14th). It’s often seen as something of a bucket-list right of passage for backpackers, having been eulogized by Hemingway and inspired many a work of art and literature. Whatever you think, you’ll want to be careful – the running of the bulls has claimed 15 lives since 1924!

Thing is, Pamplona is pretty wonderful even if you don’t make it for the iconic chasing bovines. The capital of Navarre province, it’s a historic hill town surrounded by fortification walls that were built in the 1500s. It sports one massive cathedral and streets of hauntingly elaborate Basque Country architecture.

Oh, and it’s on the Camino de Santiago, arguably the most famous pilgrimage route in Europe. Join that for an experience of a lifetime. It goes east into the snow-capped Pyrenees and west all the way to Galicia and the holy city of Santiago de Compostela.

Gaucín might just be the most handsome village you’ve never heard of. One of the fabled pueblo blanco (white villages) of Andalusia, it clutches the top of the dusty Sierra de Grazalema like a wisp of cloud. It’s far enough away from the bustling beaches of the Costa del Sol to retain its rustic charm, too – it’s about 45 minutes’ drive up a zigzag road from the port of Estepona.

There are only about two main streets in pint-sized Gaucín. They weave around a bluff of rock that forms the center of the city, the stone-built Castillo del Águila rising overhead as a reminder of just how old the whole place is.

You can split your time here between sleepy pursuits and energetic activities. For the former, there are plaza-side bars like La Fructuosa and Del Zorro taverna where you can settle in for long lunches of Spanish tapas in the shade. For the latter, the reserves of the Sierra Bermeja and Parque Natural Los Alcornocales beckon with hiking paths and waterfalls and more.

It should hardly come as a surprise that Majorca makes it onto our list of the best places in Spain to visit in July. The island has established itself as perhaps the top holidaying mecca in the whole country. Leaving Ibiza to the partiers and Menorca to the retirees, it’s risen among the Balearic chain as a versatile spot that can cater to all types of travelers.

After jetting into Palma de Mallorca, where you should certainly spend some time gazing at the great UNESCO cathedral, the whole island is your oyster. Most folks will head to the southwestern shore, where resorts like Magaluf pump with life and charming towns like Port d’Andratx have stylish yacht clubs and villas.

We like the mountains, though. Cue the Serra de Tramuntana. These rugged, sculpted rises of rock are now an official UNESCO reserve. They host charming villages like Soler and Fornalutx, where you can escape just a few degrees of coastal heat and enjoy orange juices fresh from the local citrus orchards. They’re also filled with hiking paths that connect lonely beaches and panoramic summits alike.

The best places in Spain to visit in July – our conclusion

It’s no easy task, pinning down the best places in Spain to visit in July. There are just so many awesome destinations in the home of tapas and twisting flamenco dancers. Options exist on the Med and on the Atlantic. There are mountain villages with access to hiking trails. You’ve got sand-peppered coast towns that like to party. The options really are endless. Our offering includes something from a whole range of different categories, no matter if you’re after Arab history under the sierras or wild nights somewhere in the Balearic Islands.