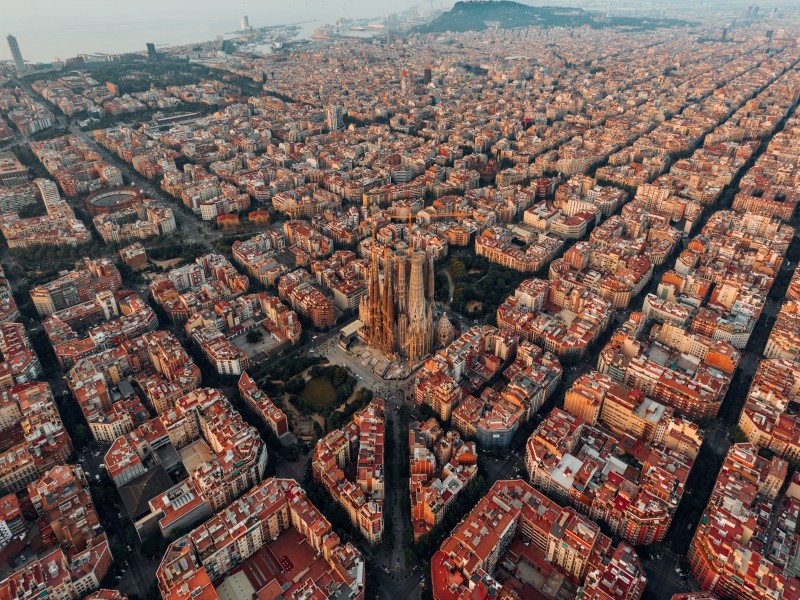 Barcelona or Seville: The Andalucian or Catalonian Capital?

Planning your first trip to Spain? With its breathtaking landscapes, exotic culture, and passionate people, it’s one of the most visited countries in the world! And two of the most popular cities to visit in Spain are Barcelona and Seville, but both are about as far from each other as they can get, with Seville in the south and Barcelona to the east, on the coast of the Balearic sea. There’s a possibility you may have to choose just one of these cities to visit.

So which one should you choose – enchanting Barcelona, the Catalonian capital with its world-renowned architecture, all-night parties, and golden beaches? Or stunning Seville, the heart of the Andalucia region with its enthralling history, deeply-rooted culture, and thoroughly authentic food scene?

Let’s dive into these two lively regional capitals, so you can figure out which city is the best option for your next vacation.

Barcelona or Seville: Ease of Travel

Access to public and private transport can vary greatly between cities, even cities in the same country. And the same can be said for both Seville and Barcelona.

Barcelona is well-known for its extensive and accessible public transport systems. Despite being an enormous city, its bus, train, and tram systems make it reasonably easy to move around most districts.

There are three separate train systems that can be used to get around the city – the TMB Metro, which operates the majority of city train lines, the government-operated FGC, and the Rodalies regional train network. Traveling by train or metro is the fastest and most comfortable way to get around. The second fastest way is by bus, and there are two bus lines, the traditional and orthogonal. Trams are another way to get around and are most popular with tourists. Taxis and rideshare services are also easy to access in Barcelona.

If taking public transport in Barcelona, we recommend you purchase a multi-day pass depending on the duration of your stay. This gives you unlimited travel during your stay on all modes of public transport, and some passes even include free admission or discounts to certain museums!

Seville is a significantly smaller city, with almost ¼ of the population of Barcelona. But it still has a convenient, accessible, and extensive public transport system that will easily get you from one city to another.

The city has one metro line connecting the central areas to surrounding suburbs, along with a very extensive public bus network. There is also a Metro-Centro tram line that runs through the center of the city. You can purchase a tourist card that gives you unlimited passes for all public transport for 1 to 3 days, and taxis and rideshare apps are also commonly used by locals and tourists alike.

Barcelona or Seville: Things To Do

Barcelona is a city with a rich culture and history, hence why it is often called the cultural heart of Spain. For centuries it has been home to some of the world’s great artists, architects, and writers. Many of the best tourist attractions you’ll find here will reflect this deep legacy.

Visit the wondrous buildings designed by Gaudí, one of the greatest modernist architects, such as the incomparable UNESCO World Heritage Site Sagrada Familia and the innovative La Casa Milà, amongst others. Güell Park is also a gorgeous blend of art, nature, and architecture.

Pay homage to some of the city’s legendary artists at the Picasso Museum and the Joan Miro Foundation. If you lean more toward sports and recreation, you should try to catch a Barcelona FC match or stop by Camp Nou, the Barcelona stadium. And don’t forget to explore the city’s two most iconic districts, Las Ramblas and the Gothic Quarter.

If you’re looking to get out of the hustle and bustle of the city, you can also visit one of the nine beaches within the city limits.

A visit to Seville is the perfect opportunity to peek into a more traditional side of Spanish culture, through its historic sites, architecture, venues, and performances. Many of the best tourist attractions in this city reflect deep traditions and art forms that have great importance to Spanish people.

For historic buildings and stunning traditional architecture, check out: Alcázar Real de Sevilla, or the Royal Alcazar Palace and Seville Cathedral (the largest Gothic cathedral in the world), both found in the city’s historic Jewish quarter, the 12th century Torre del Oro or “Tower of Gold” and the exquisite Casa de Pilatos mansions.

For cultural sites, tourists are encouraged to visit Plaza de Españam (built for the Ibero-American exhibition of 1929), and the historic Triana district. Nearby Triana you’ll also find the Plaza de Toros, the largest bullfighting arena in Spain, though, of course, this cultural practice isn’t for everyone. Flamenco, one of the great archetypal Spanish art forms, is traditional to Andalucia, so by all means you should check out a traditional Flamenco show, which can be found in various venues across Seville.

Winner: Barcelona. As the second biggest city in Spain, you’ll find more varied attractions that will likely appeal to a wider array of travelers.

Fiestas abound in Barcelona, a city that never sleeps. Most famous is Las Ramblas, where most tourists will begin their journey into Barcelona’s nightlife, due to its central location and countless clubs and bars. After that, take a walk down the maze-like alleys of the historic Gothic Quarter, where you’ll find more locals and a distinctive mix of venues, such as trendy cocktail bars, homey pubs, and dive bars.

There’s also plenty of music to be found in the city’s many venues, from internationally-acclaimed techno clubs, as well as a heady blend of Latin rhythm, Jazz, and Rock music. Raval district offers the best in techno clubs, so be sure to head there if you want to boogie!

But that’s not to say that Seville has nothing to offer in terms of parties, clubs, and bars. In fact, Seville has a very active nightlife and its own unique atmosphere once the sun sets on the city. There is fun to be had at all times of the year.

Relaxed bars and cafes abound in Calle Betis, and for flamenco performances in the streets or on the stage, visit the historic Triana district. Here you’ll also find some of the city’s best nightclubs and discotheques. If you want something a little more glamorous and upmarket, head to Alameda. Last of all is Alfalfa, where thousands of the city’s university students congregate every weekend.

Want to jump on a train and be transported to an entirely new destination? Make the most of your trip to Barcelona or Seville by taking advantage of the excellent day trips on offer just outside of both cities.

Barcelona is close to a number of gorgeous locations, both on the Mediterranean coast and further inland. These include:

Similar to Barcelona, Seville is in close proximity to a large number of historic sights and cities, and charming towns, including (but not limited to):

What some people don’t know is that some of Spain’s most famous food & drink exports – such as tapas and sangria! There are literally thousands of tapas spots in Seville and countless other unbeatable eateries. Seville showcases some of the finest traditional cuisines, both Andalusian and Spanish.

Eating out, in cafes, bars, and restaurants, is an integral part of Seville culture, so you can expect the food here to impress. Though many of its staple dishes may seem overly simple you’ll find many of them have very nuanced flavors due to centuries of perfecting the art of slow-cooking and inspired use of local seasonings.

Rather than recommending specific restaurants, we’ll suggest some of the best authentic Andalucian food you can find all over the city. These include:

Now, for the capital of Catalonian cuisine! Of course, Barcelona has its own unique dishes that are specific to the city and the wider region of Catalonia. But as the second-largest and second-most populous city in the country, it also offers a ton of cuisine from across the country, as well as international offerings.

Like Seville and many other regions of Spain, tapas is a staple of Barcelona and can be found everywhere. Traditional Spanish dishes like paella and pinchos are also popular all over the city. But what about the dishes unique to the city, and Catalonia as a whole? Let’s take a look:

One other unique aspect of Barcelonian food culture is its historic restaurants, such as the famous 4 Gats, where artists like Picasso and Gaudí once supped and held meetings in the evenings, and 7 Portes, a landmark restaurant founded in 1836.

Winner: Seville. Fantastic food can be found in both cities, but Seville is truly a Spanish paradise for foodies.

Barcelona or Seville: The Final Verdict

These two vibrant, colorful cities offer two distinct perspectives of both modern and traditional Spanish life. They are both excellent examples of what the country’s tourism industry has to offer, and you’d be likely to enjoy a trip to either Barcelona or Seville.

But if you only have the time to choose one of these beautiful cities, we have to recommend Barcelona. It has possibly the broadest tourist experience you can find in Spain, from its raucous nightlife to its incredible heritage of art and architecture, meaning a visit to Barcelona is more likely to be a hit no matter what kind of traveler you are. Seville is a brilliant city that probably offers a more unique glimpse into Spanish customs and traditions, with its rich food culture, love of flamenco, and institutional bullfighting arena. But you are likely to find more variety for your buck in the Catalonian capital.