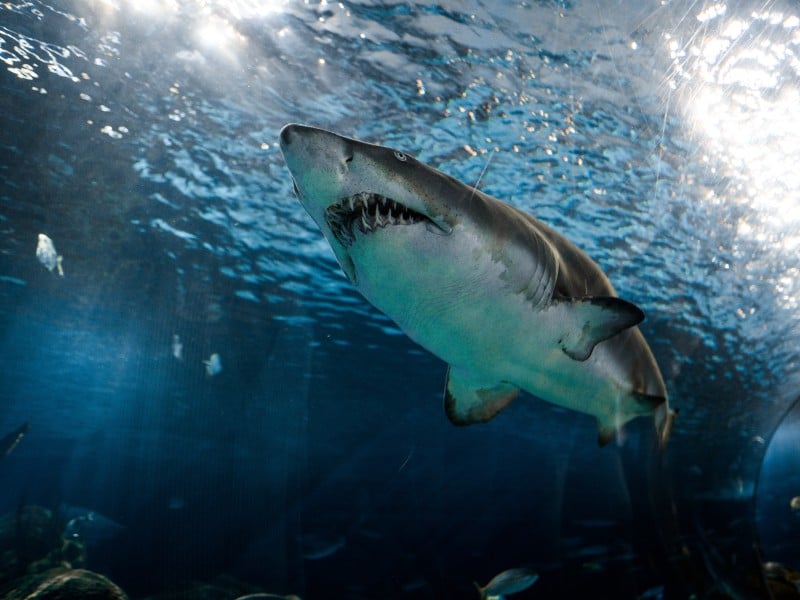 Are There Sharks In Spain? 5 Species You Might Find

Are there sharks in Spain? Unfortunately for the budding snorkeler bound for the Costa Brava or the surfer with their eyes set on the Basque Country breaks, the answer is yes – there are! In fact, there are quite a few species of the ocean’s apex predators in the waters of this Iberian country…

Thing is, Spain spreads between two major bodies of water. You’ve got the wild Atlantic on the Bay of Biscay to the north and the warmer Mediterranean Sea to the south. On top of that, you’ve got to factor in Spain’s outlying islands – the Canaries sit a whopping 670 miles to the south of the mainland in an altogether warmer part of the ocean where there’s an altogether different selection of shark species.

This guide will focus in on just five of the species of sharks in Spain that you might find during your travels in the country. It’s got some formidable customers that you’ll surely want to steer clear of but also other sharks that aren’t all that dangerous. So, are there sharks in Spain. Let’s take a look…

Are there sharks in Spain that you can eat? Well…here’s something you don’t hear every day – you’re just as likely to find a Spiny dogfish on your plate in Spain as you are in the water. Probably more likely, in fact. Known as cazón in Spanish, this member of the shark family is the main ingredient to cazon en adobo, a marinated seafood tapas that includes a mix of sugar, water, vinegar, and spices that’s finally dipped in flour and then deep fried before serving.

The animal itself is invariably known as the spurdog and the piked dogfish. It’s a common type of shark in Europe (although they are now endangered!) that poses very little danger to humans (at least a whole load less danger than human fishing rods pose to it!). They mainly live in temperate to cool regions of the north Atlantic and all throughout the Mediterranean basin, usually sticking to shallower coastal areas where they are known to feed in packs of up to hundreds or even thousands of individuals.

The dogfish hardly looks like a shark at all. For one, it’s smaller than its great white compadres et al. Like, much smaller – we’re talking males that grow to 65cm in length at full adulthood and females that reach just under 85cm at full growth. A blunt, rounded snout and a duo of dorsal fins are the unique bodily features. The color scheme is usually a dull grey throughout, with just a few lighter highlights strung along the bottom of the mouth.

Sorry, folks, but the formidable great white – the most dangerous shark species of the whole lot – does live in Spain. A sighting back in 2021 closed the lovely beaches of the Costa Brava back and came just days after another of the mighty beasts of the ocean was seen on the more rugged coast of Galicia in northern Spain. Going further back, a fisherman famously hooked a great white off the shores of Majorca in the Balearic Islands in 1976.

Although officially listed as vulnerable by the IUCN, great white sharks have colonized all of the major oceans around the globe. They are present all the way from the tropical H2O of the South Pacific to the icy waters of the Pacific Northwest. And they’re common along the Atlantic shores of Europe. More recently, scientists have mooted the possibility of great whites having breeding grounds in the Mediterranean, specifically in the rich and fertile straits around Sicily – not all that far from Spain, eh?

You almost certainly don’t want to rub shoulders with one of these. We say that because they can grow to a mind-blowing five meters across and weigh a crushing 770kg at full adulthood. That said, some of the largest specimens ever discovered might have measured even longer, at something in the region of 10 meters from head to tail. Oh, and just as Jaws belies, these guys are pretty efficient hunters, with stealthy attacks followed by jaws that can tear through living flesh like a knife through butter.

Scientists were pretty convinced that there was no tiger shark within touching distance of Spain for quite some years. That was until one was spotted hanging out in the shallows of the Strait of Gibraltar in the early 1990s. We’ve since come to understand that these aggressive feeders tend to choose deep channels where seas meet for their prime hunting ground, so the point where the Med meets the open Atlantic Ocean doesn’t sound all that strange as a potential home spot in the land of flamenco and paella.

Roughly speaking the fourth-largest type of shark species on the planet, these guys are dwarfed only by the monstrous whale shark, the great white, and the basking shark. They can routinely hit weights of 900kg and grow to a whopping five meters from snout to fin. You’ll be able to spot them for the beefy front of the body and elongated back fins. If you’re unlucky enough to be close enough to see the teeth, then you’ll be faced with menacing double rows of sideways-pointing chompers that are basically tailor-made for tearing living flesh.

The good news is that tiger sharks are almost certainly very rare in mainland Spain. Even the aforementioned sighting of 1991 hasn’t been fully confirmed and some people disagree as to whether they’re even present in the waters of the Gibraltar Rock. These guys generally tend to prefer warmer waters further south, only venturing into cooler climbs when it’s time to hunt. Notice that we did say mainland Spain there – there are almost certainly tiger sharks in the balmier Atlantic down around the Spanish canaries!

Blue sharks are another of the prolific shark species that inhabit a whole variety of places around the globe. You can get them in the Arctic waters of northern Norway but also along the balmy shores of Brazil. They’ve also made their home throughout the entire of the Mediterranean Sea, which means they are a potential encounter for folks heading to Barcelona and the Costa del Sol, though sightings in those parts are, admittedly, pretty rare.

True to their name, blue sharks are colored a light tint of cobalt on the top of the body. They usually measure something like two to three meters in length and weigh in at a pretty modest 70-100kg when fully grown. They’re not as big as other requiem sharks but compensate for the relatively unformidable appearance by being able to swim at bullet-fast speeds while hunting. Get out of the water fast if you do happen to see one – that’s the general idea!

Blue sharks are known to attack people but aren’t anywhere as near as aggressive as other types of pelagic shark. In fact, they’ve only been implicated in something like 13 biting incidents since the 1580s – yep, the 1580s, a time when Spain was only just emerging from Moorish rule! Most blue sharks survive on a diet of squid and cuttlefish, but they’re also known to hunt octopi and crab on occasion.

You aren’t likely to find the Atlantic blacktip anywhere near mainland Spain. Venture down to the sun-splashed Canary Islands just off the coast of Morocco, though, and you’ll be smack dab in the midst of their territory. These guys have a penchant for tropical and subtropical waters, meaning they need it a degree or two higher in the H2O than you get on the Mediterranean or in the Basque Country and Asturias. A sub-branch of their species also lives in the Indian Ocean and the Pacific, and they look almost identical to the specimens found in the Atlantic.

The creature has a highly adapted swimming body that’s got streamline contours running over the top all the way to the neatly curved tail. They are colored a brownish grey all the way along, apart from lighter points where the gills mark the sides of the head and on the underbelly. Blacktips much prefer shallower waters on the inside of reef systems. They tend to congregate in bunches during the mating season (around the early summer) in muddy swamps and lagoons with a connection to the open sea.

They aren’t known to be overly aggressive, but they do have one unique behavioral treat: Watch them spin and flip in the air over and over during their hunting runs. Regularly seen by divers, they are often curious about human contact and rarely considered dangerous. That said, they are thought to have been responsible for over 40 unprovoked and provoked attacks in the last 100 years or so and are one of the most prolific attackers in the state of Florida. Thankfully, not in Spain!

Are there sharks in Spain? Our conclusion

Are there sharks in Spain? There are. This country straddles the Atlantic and the Mediterranean Sea, and it’s got island chains set deep out in the middle of the warmer parts of the bigger oceans. The upshot? There are loads of potential habitats for these feared predators of the water, with places that have subtropical H2O and places that have cold currents alike. The good news is that shark sightings are very rare in Spain, even in the Canary Islands. Attacks have happened, but nowhere near with the same sort of frequency as you’d get in the US, South Africa, or Oz.