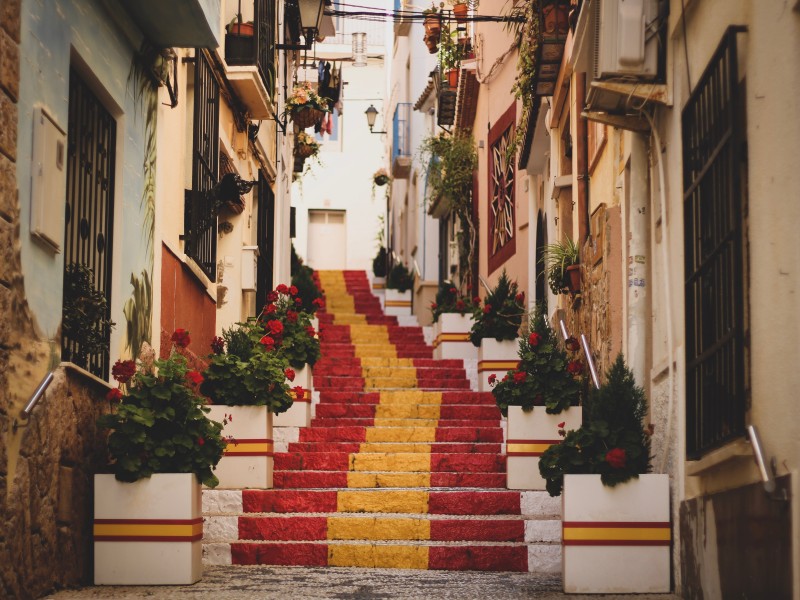 Alicante or Malaga: Which Spanish Coastal Town To Visit?

So you’re stuck between Alicante or Malaga for your next Spanish holiday? While this isn’t going to be an easy choice, both sun-soaked destinations won’t disappoint. Golden beaches, ancient towns, and family-friendly resorts, it seems the two provinces have more in common than not. But you could be surprised…

Alicante with its charming old town brings colorful houses, lively nightlife, and sweeping Mediterranean views from its medieval hilltop castle. While Malaga comes with the popular beach resorts of Marbella and Torremolinos, still without diluting the culture of the capital and its 11th-century architecture.

Which one you should visit this year depends on a whole host of factors, and our guide is here to dissect it all. From the beaches to the costs and everything that makes these holiday hotspots unique. Will it be Alicante or Malaga that gets our vote? Find out below.

Alicante is an international port city with an authentic feel. When it comes to vibe, it represents the epitome of a chilled Costa Blanca getaway and is a great place for city breaks and beach jaunts. The province is in the Valencian region of southeastern Spain and stretches almost 6,000 square kilometers with 220 kilometers of coastline.

With a nearby airport and tons of beach resorts in easy reach, Alicante is one of the most popular tourist spots on Spain’s southeast coast. The city itself has something for everyone, creating a perfect balance between relaxation and action. From the broad public beaches, perfect for water sports, to the central Old Town, Barrio de la Santa Cruz, where you can spend hours wandering the narrow streets and climbing the steep steps to the medieval Castillo de Santa Bárbara. Whether it’s Spanish authenticity or a fun-filled beach getaway, you’ll find it here.

Set along the sparkling Costa del Sol, Malaga is a perfect example of Andalusian life and the provincial capital city is brimming with history and vigor. Smaller than Alicante, Malaga is equally authentic, dressed in sandy coastline and complete with its own alluring Old Town.

Once a gateway to the glitzy resort towns of the Costa del Sol and a lowly cousin to spectacular Seville, Malaga has shaken its reputation to become a beacon of culture and small city life. It’s the birthplace of Pablo Picasso and his art is interweaved in all the galleries and museums. The exciting culinary scene and youthful nightlife have also helped put Malaga on the map.

With an eclectic mix of golden public sands, hidden coves, turquoise waters, and beachfront resorts, Alicante’s beaches are a huge pull factor and there’s room for all. Surfers, sailors, divers, and sun-worshippers will find solace in the blissful bays that bless this region. From Benidorm’s high-rise hotels to Denia’s quaint fishing markets, life in Alicante is centered around the sea and a huge part of holidays here.

San Juan is one of Alicante’s most popular public beaches. Almost three kilometers of fine golden sand stretch along with the Costa Blanca, just eight kilometers from Alicante city. Despite being well-known and well-loved, you’ll always find a quiet patch of undisturbed beach to spend the day lost in a great novel, or a lively beachfront hotel bar to drink and eat to your heart’s content. The large exposed bay also offers great views of surrounding neighborhoods and there are plenty of leisure activities to keep you entertained.

Once a string of fishing villages, Malaga’s coastline is equally important to the region. Now offering luxury resorts, refined beachside restaurants, and sun-lounger-lined family beaches, the dark, long stretches of sands have something for everyone.

Nestled between vibrant promenades and crystal-clear waters, the city beaches in Malaga are just as much a highlight as Alicante’s, with Calahonda being among the longest and most popular. A four-kilometer stretch of golden sands extends along the coast of this former fishing town. Now a self-sufficient development with tourists in mind, much like Marbella’s pebbly sands, it might not offer undisturbed Spanish charm, but the convenience and size make it great for families.

Speaking of Marbella, there is almost 30 kilometers of coastline in this area of Malaga alone, with the sunshine beating down on the VIP beach clubs 300 days a year. Malaga has as much variety as Alicante, and both are characteristically crowded in the summer months. But Alicante steals the win when it comes to authentic appeal.

Alicante and Malaga might have charming Old Towns, culture, and quaint villages, but both cities are brimming with nightlife to compete with Europe’s major party destinations. Known to have some of the best clubs in Spain, Alicante is overflowing with options from beach bars, to classy terraces and late-night clubs.

Malaga is also well known for its lively nightlife and music scene. Bars, late-night cafes, and clubs are scattered all over the city with dynamic DJs catering to all tastes. You can enjoy the city lights from a boat party in the port area or check out the strip of bars adjacent to Playa de la Malagueta that come to life when the sun comes down.

Marbella is also renowned for its beach clubs to rival those in Ibiza and Mykonos. While Alicante is a stone’s throw from Spain’s second city, Valencia, a thriving student hub with a great party atmosphere. Both cities also have plenty of great restaurants to satisfy all tastes and evening entertainment for kids and families like theatre shows and beach fun.

The Things to Do

Malaga is the older of the two destinations and packed with history. Still, slightly bigger, Alicante has no shortage of things to do. In the city, the Castillo de Santa Barbara, a 9th-century castle is a must-see. The entire city is built at its base, and despite a turbulent past of warfare, it is near-perfectly preserved. Take a lift to the top or scale the steps for the best views of the city.

El Barrio, the old town, will be one of the areas that stands out when you’re looking down on Alicante. The historical heart of the city with its cobbled streets decorated in flowers is perfect for getting lost. El Barrio really comes to life at night with tapas bars and tourists. In Alicante, you can also take a stroll down the spectacular la Explanada de Espana, Alicante’s colorful tiled promenade, or jump on a boat to Tabarca, an untouched island off the coast with whitewashed houses and a historic church. From beaches to exploring the city, you won’t get bored.

Still, Malaga comes out on top with unrivaled historic significance. Dating back almost 3,000 years BC, it’s one of the oldest cities in the world, and the center is like an open museum, documenting the Phoenicians, Romans, Arabic, and Christian influences that all still linger in the city. The Alcazaba is an undoubted highlight. Built in the 11th-century during Moorish rule, the medieval fortifications offer impressive sea and city views. Dominating that city skyline is the towering Renaissance Cathedral, nicknamed “La Manquita” meaning “one-armed lady” because of its unbuilt spire.

From the Picasso Museum to the busy shopping streets, old markets, and beautiful port, you wouldn’t believe that the surrounding regions are more often associated with resorts and relaxation than cultural attractions. Malaga is endlessly diverse and shouldn’t be underestimated, stealing the win in this category.

Spain is inexpensive to vacation and live in, especially when compared to other countries in western Europe, and the average cost to visit these two regions is largely similar. Still, how you plan to spend your holiday could make a real difference in whether Alicante or Malaga is cheaper to visit. In fact, the average daily costs in Malaga and Alicante are just €4 apart, coming in at €106 ($116) and €102 ($111) respectively. But this doesn’t mean any two holidays will cost the same.

For accommodation in Malaga, you can expect to pay an average of €54 ($59) per person for one night, compared to €34 ($37) in Alicante. But this is the biggest discrepancy between the two spots, dragged up by Malaga’s resort towns, and it doesn’t mean a trip to Malaga will break the bank.

Airport transfers from Alicante and Malaga airports to the cities cost much the same, at €30 ($33) on average each way, and although flight prices are subject to change, they shouldn’t differ too much by region. Where Alicante exceeds Malaga on cost is eating out. Where you go will affect these averages, but travelers can get by on €27 ($29) a day in Malaga on food compared to around €57 ($63) for the same meals in Alicante. Groceries and alcohol also cost slightly more in Alicante, as does local transport and entertainment with ticket shows, entrance fees, and performances averaging at €25 ($27) in Malaga but €42 ($46) in Alicante.

If you’re looking to make a move to either destination, expect higher monthly utilities in Alicante, but 20 percent lower rental costs. With big expenses bringing costs up in Malaga, but entertainment and meals costing less, it could be a better option for a fun-filled few days. But even with higher food prices, Alicante’s cheap accommodation could be better for the long haul.

Spain benefits from a beautiful Mediterranean climate. With Alicante and Malaga both strategically located on the south coast, they get the best of Spanish weather, but they do differ slightly.

Hot and muggy summers and long, windy winters are the norms for Alicante. The temperature rarely falls below 38 degrees Fahrenheit and you can expect highs of 90 in the summer, this makes it marginally warmer than the more southern Malaga. Both regions experience their coolest temperatures in January, but this dips closer to 40 degrees Fahrenheit in Malaga with fewer clouds and exposure to westerly winds.

Malaga experiences slightly more rainfall but the most hours of sunshine in all of Spain. The heavy cloud might make Alicante the hotter of the two, but Malaga’s clear blue skies are arguably more alluring than one-degree warmer days.

Which is better Alicante or Malaga?

Fantastic beaches, endless entertainment, and a charming old town, Alicante offers a real Spanish city break but has something for sun-lovers, partiers, and families, too. The seafronts are less resort-heavy in Alicante but there are still plenty of commercialized areas with beach activities and no shortage of restaurants. Alicante might be more authentically Spanish than some Malaga getaways, but the ancient city is unrivaled in historic appeal. Dance away in Marbella’s beach clubs and shop along the promenades to your heart’s content, but Malaga really steals the win for us with its heritage sights, architectural mix, and dozens of museums and galleries. Which will you pick?

How much does one week in Spain cost?

Which part of Spain has the most ex-pats?

The Costa del Sol and the Costa Blanca are hugely popular with ex-pats with cheap housing, vibrant local communities, and fantastic year-round weather. Spanish state schools also have a wonderful reputation in these regions, but there’s no shortage of acclaimed international institutions following the British curriculum. Tenerife and Gran Canaria are Spain’s most popular islands for expatriates with similar conveniences. They also benefit from even warmer climates, located west of North Africa, part of the Spanish Canary Islands.