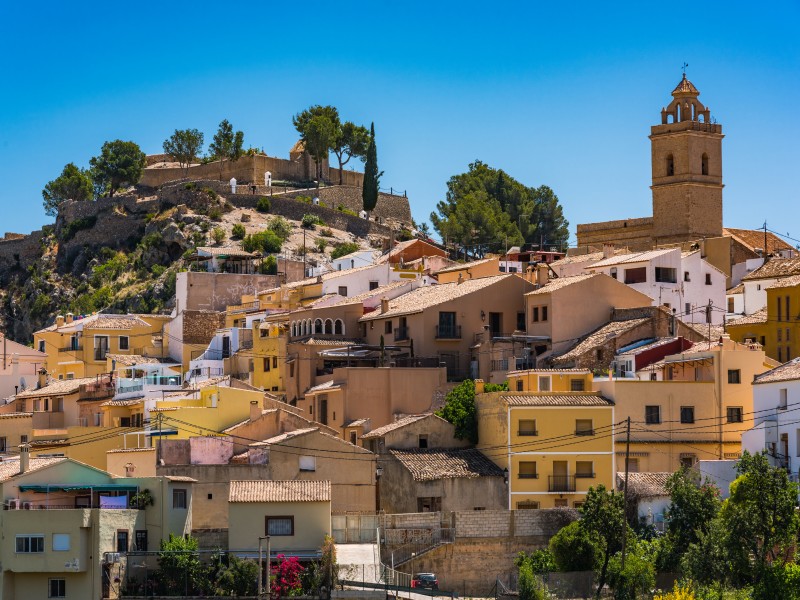 They might be just 40 minutes away by car, but when it comes to Alicante or Benidorm, these two Spanish getaways are as different as chalk and manchego cheese. Undoubted highlights on the Costa Blanca and both former fishing villages, they’re now among the most touristy destinations on the southeastern coast and where you pick to visit could make all the difference.

Located in the same province, Alicante is the capital and a pinnacle of Andalusian life. This port city is full of culture with its charming Old Town, golden sands, medieval fortifications, and vibrant nightlife. Likewise, the seaside town of Benidorm comes with urban beaches and a renowned entertainment scene. But it’s earned a reputation from the English pubs and vibrant ex-pat community found here rather than its historical importance.

Authentic city break or brits-abroad paradise? There’s actually much more to it than that. Find out where you’ll be heading on your next holiday as we explore all that makes Alicante and Benidorm unique. Let’s go.

Alicante or Benidorm: The General Vibe

Although Benidorm is technically within Alicante, with both sharing the same 240 kilometer stretch of Costa Blanca coastline, we’re talking about Alicante town when comparing the two. With its historic center, narrow streets, and colored houses, Alicante isn’t representative of the region at large but does offer a taste of true Spanish life.

Both areas are tourist hotspots, but Brits now make up a fifth of Benidorm’s 70,000 population. If it’s authentic Spanish experiences you’re after, it is not the place to go. Characterized by its unmissable high-rise hotels which shroud the seafront, swathes of sandy beaches, and bustling waterfront promenade, Benidorm is a bubbly resort town for tourists of all ages.

The main difference between Alicante and Benidorm is reputation. Alicante is far more upmarket, culturally rich, and historically significant. Benidorm, too, was once a small fishing village and boasts its own compact cobblestoned Old Town, dotted with churches and ruins. Still, it’s the 280 English-themed nightlife establishments that stand out, with globalized cuisine and gaudy souvenirs stealing from the Spanish feel.

Yet, Benidorm has its undoubted charm. It’s a home away from home for many foreigners where the ex-pat community is waiting to welcome you with open arms. There’s a reason it’s only been growing in popularity since the 1960s, with alluring Mediterranean waters and endless excitement for families and kids. Kayaking, water parks, karaoke, and cheap prices are all part of the deal and Benidorm draws tourists back year after year.

For us, there’s no competition. Alicante is a charming city break and a relaxing beach getaway in one. Museums, galleries, and heritage sites make it far superior to Benidorm’s tourist-choked resorts, but we understand the appeal of the latter.

Alicante or Benidorm: The Beaches

Alicante is known for its public beaches that lure in all sea lovers. Snorkeling, surfing, diving, and sun-bathing, you name it, the golden sands that hug Costa Blanca’s coast are perfect for it. Playa Postiguet is Alicante’s main urban beach, located at the foot of Santa Bárbara Castle and fringed with lofty palms. The sprawling sands are a mecca for swimming and sunbathing, with charming cafes and bars all along the shoreline.

Next to the marina and the magnificent Explanada de Espana, a colorful tiled beach approach, Postiguet can get very touristy in the high season but it doesn’t lose its Alicante charm. There’s also San Juan, another highlight on Alicante’s beach scene. Located eight kilometers from the city, there’s always an undisturbed patch of beach along the three-kilometer stretch of sand waiting to be enjoyed.

Benidorm’s beaches are arguably more iconic than Alicante’s. The turquoise waters of the sun-soaked med do draw visitors to Alicante, but the city is much more than its seaside crowds, whereas life in Benidorm is centered around the beach. Levante and Poniente beaches are partly responsible for putting Benidorm on the map. Hugely popular with British families, these adventure-packed sands draw the same crowds year after year with water sports, cheap bars, rows of sun-loungers, and clear, calm seas.

There’s also the small cove that separates the two beaches in the Bay of Benidorm, Cala Mal Pas, where the fine white sands offer a tranquil release from the crowded main playas. It might be notoriously busy, but this means Benidorm’s beaches are well-maintained and everything is organized with convenience in mind. The playas have ice cream stalls, beach shops, toilets, and even a park, Parc d’Elx, that sits on the edge of Poniente as an urban oasis with fountains and swaying trees. Benidorm’s beaches have it all and resort escapes are what it does best. Still, Alicante’s reign supreme with fewer crowds and a better ambiance.

Alicante or Benidorm: The Nightlife

There is also a vibrant student community that keeps the city alive, even outside of the summer months. A number of nightclubs are scattered all over and classy lounges remain populated until the early hours. Alicante’s Explanada de Espana is also brimming with life once the sun goes down. Home to an open-air theatre called “La Concha” with a busy program of summer concerts, and close to The Panoramis shopping center where you’ll find classy restaurants and a modern cinema.

You can dance the night away at any time of year in Alicante, and do it within an environment of experienced locals rather than hoards of tourists. But everything about Alicante’s nightlife falls short when held up next to Benidorm’s. In fact, this party resort could paint Ibiza pale in comparison.

The “Dubai of the Mediterranean” as Benidorm is affectionately dubbed, is all about fun. The main strip, adjacent to Playa Levante, might be tacky to some, but it qualifies as one of the liveliest areas in Spain for nightlife with karaoke, cabaret, magic shows, and arcades. There is nothing Spanish about Benidorm’s nightlife, apart from the Euro-trash tunes you’ll hear echoing from the late-night discos. Still, you’re more likely to hear “Come On Eileen” playing at Benidorm’s bars than any Reggaeton beats, and this is why it is so loved by English punters.

The Poniente side even has some more traditional entertainment in the way of live music and tapas restaurants, and the same can be said for some resorts where Spanish dance lessons and local cuisine can be enjoyed on special evenings. Benidorm is a playground for energetic Brits, and if not anything else, the nightlife is endlessly amusing.

Alicante or Benidorm: The Things to Do

Benidorm might be more about beach relaxation and nightlife than adventure and culture, but the surrounding area offers some surprising attractions to suit every traveler. From the blue-domed houses of El Casco de Antiguo, to the Algar Waterfalls, visitable in an half an hour drive from both Benidorm and Alicante, there are beautiful areas to explore if you don’t wish to be refined to Benidorm’s hotel-lined shores.

The renowned Benidorm tourist bus will ferry you around with other groups of happy travelers and there’s no shortage of day tours to book. But the attractions are just that, engineered. There is little in the way of solo adventures in Benidorm, at least they’re not the norm. Shopping centers, English theaters, and kids clubs will keep you busy, but Benidorm is really about true R&R in the sun, with a sprinkle of evening entertainment.

Alicante is the best of both worlds when it comes to daytime activities. It’s a fantastic place for a lively beach resort getaway and you can enjoy sailing, sunbathing, swimming, and even paragliding on its expansive beaches. But the architecture and attractions will give you a true taste of the heritage and essence of Spain, that’s if the tapas bars that line the main port and El Barrio haven’t done it already.

From the unmissable Castillo de Santa Barbara, which stands tall overlooking the city from its medieval settlements, to the Guadalest Valley, a rural village just 15 minutes by tram from Alicante and nestled between a valley, cradling the bluest freshwater lagoons. The local tram is Alicante’s answer to the Benidorm bus, but you’ll find more natives and commuters than tourists. This charming transport will take you to all the museums and galleries that document Alicante’s rich history, but there’s also plenty of souvenir shopping on the Old Town tourist trail to be done, too.

Alicante or Benidorm: The Costs

As they’re not far apart, Alicante and Benidorm benefit from the same sultry Mediterannean weather and Spain’s signature cheap prices. Still, there are some discrepancies between the cost of a holiday to these two destinations and it could make all the difference if saving money is your top priority.

Benidorm is notoriously cheap, known for its package deals and all-inclusive hotels, while capital cities like Alicante, although only the capital of this province, are typically more expensive. But Alicante has a strong local community and tourist pricing doesn’t threaten the strength of the Euro here, while Benidorm prices have sky-rocketed from what they once were with its increased popularity. So how do Alicante and Benidorm compare now?

Alicante or Benidorm: The Verdict

They couldn’t be more different despite their close proximities. Alicante and Benidorm are jewels on the Costa Blanca’s crown, but for opposite reasons. The truth is, you could squeeze Alicante and Benidorm into the same holiday without much hassle and have two very different vacation experiences. But if you’re still stumped between the two, your vacation style should make it easy to decide.

Alicante is all about authenticity, from its ancient history to its local cuisine. You won’t find English speakers, let alone English breakfasts, but this doesn’t deter the budding tourists that flock to Alicante for sun-soaked city breaks every year. On the other hand, Benidorm is a party haven. The resort town with its skyscraping hotels has something for everyone from families to stag dos and even OAPs. It might be brimming with Brits and lacking Spanish charm but it’s a home away from home for the millions of returning holidaymakers and its puts a life in the sun in graspable reach for ex-pats. For us, it has to be Alicante with its upmarket appeal, but Benidorm deserves a visit, especially if it’s penny-pinching and celebrating you’re there to do. Which will it be?