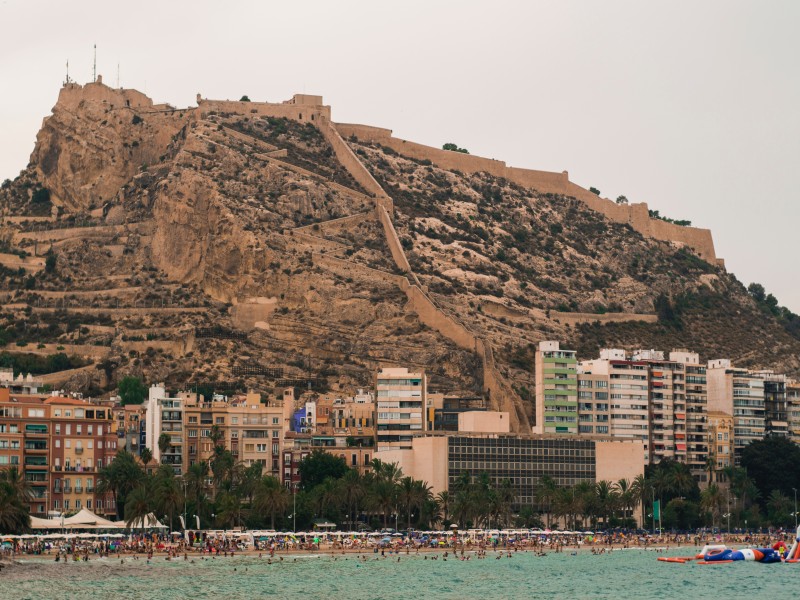 Alicante or Barcelona: Which Spanish City Should You Visit?

So you’re stuck between Alicante or Barcelona for your next city break? Let me tell you, choosing one of these cosmopolitan destinations won’t be easy. Spain’s coastal towns are heaving with tourists and things to do. Neither city will disappoint, but we’re here to help you make the decision.

Alicante is a dynamic port city on the Costa Blanca, soaked in Mediterannean sun and hugged by picturesque coastline. The provincial capital is steeped in history and small city charm, but bustling Barcelona is as iconic as its architecture. Home to modernist landmarks, several Roman sites, and its own sprawling urban beaches, Barcelona gives Alicante a run for its money but both cities offer something for every traveler.

From the things to do to the average costs and year-round weather, this guide compares Alicante and Barcelona to bring you the lowdown on which city is best. Whether it is a beach getaway, party weekend, or history lesson you’re after, Spain’s cities will provide. Let’s get into it.

Alicante or Barcelona: The General Vibe

The provincial capital of Costa Blanca, Alicante is brimming with authentic charm, but the bustling urban hub also offers the perfect balance between action and relaxation. From lazing on the beach to exploring the Old Town and touring the nightclubs and discos which are packed until the early hours, there’s something for everyone.

Alicante attracts a lot of tourists, with three million flocking to the province every year. But the city is a lot less tourist-choked than Barcelona and a lot of summer visitors are actually Spaniards coming from Madrid or other areas of inland Spain. This gives the city an authentic appeal and Spanish feel that contrasts the famous nearby resort towns like Benidorm.

Alicante isn’t small for a seaside town and is actually twice the size of Barcelona in terms of the greater city limits. But Alicante’s center is very compact and much smaller than Barcelona’s. Barcelona is also the second-most populous city in Spain, with a population of 1.4 million, compared to Alicante’s lowly 300,000. This means Barcelona’s streets are crowded and dense. You might find narrow cobblestone streets in the Gothic Quarter much like Alicante’s Barrio de Santa Cruz, but it’s unlikely they’ll be untrodden by tourists and Barcelona is overflowing with international visitors all year round.

Still, Barcelona is popular for good reason. Colorful neighborhood festivals, rich cultural heritage, a world-renowned football team, and world-class cuisine, Barcelona is alive with energy. Alicante in its seaside charm is certainly some travelers’ dream, while Barcelona appeals to the masses.

Alicante or Barcelona: The Things to Do

Alicante might be a quaint provincial capital, but there’s plenty to keep you busy and the city shouldn’t be underestimated. Unlike many towns that line the Costa Blanca where holidays center around the beach and the artificial nightlife, Alicante is steeped in thousands of years of history and there are tons of attractions to explore.

Stroll the Explanada de Espana before the crowds rock up, scale Mount Benacantil to tour the Castillo de Santa Barbara, a ninth-century fortress from Muslim rule that offers fantastic views of the city and the bay of Alicante, before you get lost in the Old Town and its baroque architecture.

Alicante is also a great vantage point to explore the province at large. You can visit some stunning sights of natural beauty to which Catalonia can’t compare, like the Guadalest Valley and its waterfalls and turquoise lagoons, or take a coastal walk to Cala Almadraba and check out Villajoyosa, a postcard-perfect coastal town with colorful buildings to rival Amalfi’s. Still, Barcelona offers so much that you don’t need to venture beyond the city limits to be impressed.

Skip the queues and revel in the towering spires of the Sagrada Familia from a nearby rooftop bar, wander Las Ramblas and enjoy the street entertainment as you do, take tapas in a cavernous taverna in the Gothic Quarter and hike to the Bunkers del Carmel for sunset, to enjoy unrivaled views of the city to the sounds of amateur guitar players.

Both cities have a vast array of museums and galleries, Alicante housing Picasso’s and Dali’s artworks, while Barcelona acts as a canvas for the same great names. Alicante puts up a good fight, but Spain’s second city can’t be topped on things to do. One thing’s for sure, you won’t be bored in either.

Alicante or Barcelona: The Nightlife

Spain is notorious for good nights out. Youthful student crowds, energetic tourists, cheap prices and tempting weather is the perfect recipe for great nightlife. It’s much cheaper to party in Alicante and Barcelona than London or New York and the clubs stay open later and party strips are easier to navigate than in other major cities.

Both cities also have authentic party scenes that aren’t catered towards tourists like in Spain’s resort towns. University students and young professionals override the bars and clubs in Alicante, and young Barcelonans are better-versed on the best places to party. Alicante’s port harbor is lined with upscale lounges and restaurants, and Playa Postiguet comes alive in the summer months when the nightlife is centered around beach kiosks. You’ll also find no shortage of bars and clubs scattered around the old town, with revelers spilling onto the streets at all hours.

Barcelona’s nightlife is concentrated near the beach, but the best clubs are located deep underground along the seafront promenade. Barcelona’s nightlife has a more exclusive feel, with classy rooftop bars and hotels being characteristic of the city. But youngsters also enjoy the vibrant R&B music scene in the smaller nightclubs and the party is often taken to the streets, with outdoor fiestas and impromptu beach gatherings being the norm.

Alicante might be one of Spain’s best nightlife destinations, but Barcelona is one of the best cities in the world for party-goers. You can enjoy live music, late-night clubbing, and lively bar culture in both cities, but Barcelona just steals the win.

Alicante or Barcelona: The Beaches

Urban beaches are characteristic of Spanish city life. Having perfected the metropolitan seaside vibes, beachfront promenades and towering palm trees are more a feature of Spain’s major cities than high-rise buildings. Barcelona’s Playa de Barceloneta stretches the entire length of the city. The wide sands are the center of life in downtown Barcelona, with outdoor gyms, green spaces, bustling cafés, and sports facilities lining the shores.

The seafront is a great place to live and modern high-rise hotels are balanced against a barricade of Gothic-style apartment buildings with picturesque sea views. Despite sitting on the edge of one of Spain’s urban hubs, Barceloneta is very clean and water quality is high, with no dangerous currents or big waves making the waters great for swimming.

Likewise, Alicante’s Playa Postiguet has a lot in common with Barcelona’s Barceloneta, its pristine wide sands sprawling with entertainment and greenery. Still, Alicante might sit on the same Mediterranean Sea as the second city, but the smaller town located in the protected Bay of Alicante boasts sparkling azure waters with which Barcelona cannot compete.

The Costa Blanca stretches 220 kilometers and is home to some of the best beaches in Europe, all of which are within reach of Alicante’s cobbled streets. Expansive city sands, tucked-away coves, and magical marine life, Alicante’s coastline is picture-perfect and more beaches have been bestowed the Blue Flag than anywhere else in the country. If that isn’t a testament to Alicante’s quality beaches, we don’t know what is. Barcelona might be a picture of urban beach life, but if it’s a beach getaway you’re after, Alicante is unrivaled.

Alicante or Barcelona: The Costs

Cheap holidays are part of Spain’s unique appeal. From attractive package deals to local pricing, Spain is one of the only remaining countries in Western Europe for inexpensive vacations, but how do Alicante and Barcelona square up?

As a densely populated economic hub and international tourist magnet, it’s no surprise that Barcelona is more expensive than Alicante, but it might not be as pricey as you first think. You can grab an inexpensive meal in Alicante for €11 ($12), which will only cost around €1 more in Barcelona. Domestic beers, cappuccinos, and bottled water will all set you back much the same in the two cities, as will monthly transport, but it’s the nightlife and Barcelona’s world-famous restaurant scene that sees some real discrepancies.

Alicante or Barcelona: The Climate

Spain is climatically diverse, but most of the country benefits from warm-year-round temperatures and little rainfall thanks to its strategic southwestern Mediterannean location. You can expect hot and humid summers in both Alicante and Barcelona, but Barcelona is more temperate, with a shorter summer period and much cooler winters.

The two cities might both be on the eastern Mediterranean coast, but Alicante is 500 kilometers further south than Barcelona. The Costa Blanca is known to receive warm Sahara winds and the summers are considerably muggier than in Barcelona, but average temperatures hover in the late 80s in July and August in both cities.

Alicante experiences scorching highs from May through to September, and the temperature rarely dips below 50 degrees Fahrenheit. Barcelona, on the other hand, is cool from November until March with a low of 40 degrees Fahrenheit and more rain than Alicante.

Neither climate is anything to complain about, but Alicante is much better for winter sun and guaranteed heat. The region also benefits from the climate in other ways with the rich Mediterranean ingredients that thrive in warm dry weather being central to the local food. Regardless of what you want to do, Alicante’s weather makes it a better choice for the low season.

Alicante or Barcelona: The Verdict

They might both be centuries-old Spanish cities set on sparkling Mediterannean coastline, but Alicante and Barcelona are worlds apart. These timeless metropoles are bursting at the seams with art, history, and culture and they tell two very different stories about Spanish city life. Although wildly popular with tourists, this doesn’t spoil the vibe in either city, and Alicante and Barcelona both deserve a spot on your travel bucket list. From Alicante’s Old Town and medieval ruins to Barcelona’s Gothic Quarter and upscale restaurants, there is little room for complaint. So, for an authentic seaside getaway with a sprinkle of ancient heritage, head to Alicante, but for a more cosmopolitan energetic feel, it’s Barcelona all the way. Which will win your vote?