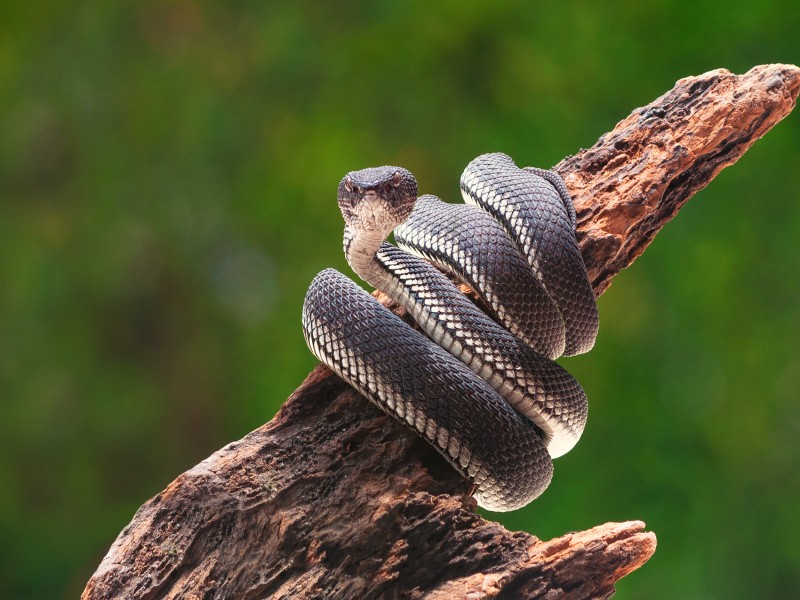 6 Venomous & Dangerous Snakes That You Can Find in Greece

With its heat, dry climate, dramatic landscapes, and altitudes, Greece has long been a popular tourist destination. But these same traits also make it a perfect spot for a variety of species of snake. The majority of snakes in Greece are harmless but some are venomous and can be dangerous.

Some of them are also rare and endangered so seeing them can be an incredible experience. So long as you are careful and respectful of the snakes and their habitat. Most snakes don’t attack unless provoked, so never try to move, touch or disturb a snake even if you think it’s harmless.

Snake bites in Greece are a relatively rare occurrence and generally happen when people unintentionally surprise a snake. But these accidents do happen, so if you are bitten by a snake, stay calm and seek medical assistance immediately. Especially if it is one of these six dangerous and venomous snakes.

Greece’s very own snake, the Milos Viper is endemic only to Milos, Kimolos, Sifnos, and the unpopulated Polyegos. Its scarcity and its endangered status make a sighting of this fella a rare treat. On average 50-70cm long they have the triangular heads of a traditional viper but can be a variety of colors. Most often they are a mix of grey, brown, and black with reddish hues, but occasionally they can be a beautiful brick red all over.

These guys like sunny, rocky, dry landscapes and can live amidst piles of rubble and stone. But their preferred habitat is the areas around small pools and streams. They like to slither up into trees beside the water and wait on the branches to catch unwitting birds. So be sure to keep an eye on low branches when hiking near creeks on Milos. They are not an aggressive species but will attack if provoked or if perceiving a threat. Their venom is dangerous and can be fatal in rare cases. Most often though, a Milos Viper bite can be easily treated leaving no lasting effects.

Macrovipera Schweizeri are on the IUCN Red List of Threatened species. There are only around 3000 of these snakes left in the wild. Their numbers are dwindling due to hunting, trafficking, the reduction of their habitats, and the number of deaths that occur on roads. On Milos, snake tunnels have been introduced under some roads in an attempt to combat this issue.

This one goes by many names such as the Coastal, Rock, Mountain, or Turkish Viper. In Greece, it lives in the northeastern areas of the mainland as well as on several islands including Skiathos, Kos, Kalimnos, and Lesbos. This snake favors humidity in its habitat and likes well-vegetated areas. It has distinctive coloring, white or pale grey with a black zigzagging pattern which makes it easily recognizable as a viper.

This viper is one of the most venomous snakes in Greece and one of the most aggressive. It grows to an average of 70-90cm but has reached 130cm on some of the Aegean Islands. It is one of the few that does attack without provocation and it injects venom with every bite. Its venom is potent, so potent that it has been used in medical trials assessing the effect of snake venom on Cancer cells. So if you come across an Ottoman Viper as you explore Greece, keep your distance and do not threaten the snake in any way. If a bite does occur seek medical help immediately.

This snake also goes by many names, Sand Viper, Horned Viper, and the Greek name, Ochia. The Nose Horned Viper moniker is perhaps the most helpful when it comes to recognition. The name comes from the scaly bump that protrudes from the snake’s nose. This bump is actually flexible, not hard or horn-like at all, but it is distinctive and so a good way of recognizing this venomous snake.

One of the most venomous snakes in Greece, this one is also one of the largest. It can reach 95 cm in length and is known for its large fangs and the high levels of toxicity in its venom. However, these snakes are not aggressive and do not often attack unless provoked. The Nose Horned Viper’s preferred response, when threatened, is to hiss loudly in warning or to try and make its escape. It will usually only bite as a last recourse. Its bite is venomous however and is hemotoxic (causing damage to red blood cells). It can also cause pain and tissue damage. If a bite does occur, seek medical attention immediately.

Located throughout Greece this snake lives in many different habitats. They like dry, rocky hills, scrubby farmland, and sand dunes with little vegetation. They have also been found living closer to humans in piles of rubble and dry stone walls. Sadly, these snakes are decreasing in number due to humans hunting them for their perceived threat. People also trap them to collect their venom.

Extremely common and wide-ranging, this Viper’s habitat stretches across most of Europe, East Asia, and Russia. They are found further north than any other snake species. These hardy reptiles can survive in all manner of places, rocky hillsides, woodland, farmland, meadows, quarries, hedgerows, and wetlands. But in Greece, they are mostly found in the North of the mainland, in mountainous, sparsely populated regions. They hide from predators and so are quite tricky to find (should you want to).

Although the snakes vary in color a few similar characteristics tend to make the European Adder distinctive. A dark zig-zag pattern stretching the length of the snake’s back and a clear V or X-shaped dark mark on the back of its head. The European Adder tends to be thicker and wider than other vipers although not necessarily longer, averaging only around 70cm.

Whilst the European Adder is venomous it is not generally considered very dangerous. Firstly because it is rather a timid species that would rather escape than confront an attacker. Secondly, because it doesn’t always inject venom when it bites. And thirdly because its venom is less toxic than some of Greece’s other more dangerous snakes. Bites usually cause pain, localized swelling, and tingling. However, worse symptoms and rare fatalities have occurred, so any bite should be taken seriously.

This little snake is one of the rarest and most threatened in Europe. It lives in the mountains of Northern Greece, along with its subspecies Vipera Ursinii Graeca – the Greek Meadow Viper, which is endemic only to the Pindus mountains of Greece. These snakes inhabit dry rocky slopes, alpine meadows, and grasslands. Unfortunately, climate change, changes in agricultural practices, and the reforestation of areas that used to be pastoral or meadowland has led to a large reduction in these snakes’ preferred habitats.

The Meadow Viper is also highly sought after in the pet market. Their numbers are dwindling as people hunt them for captivity. These decreasing numbers have put them on the IUCN red list of threatened species and steps are being taken to protect the remaining snakes.

This fella looks remarkably similar to the Common European Adder but is on the smaller side averaging only 40-50cm. Little though it might be, it is also more fearsome than the common adder. With a strike-first attitude, this viper doesn’t wait for provocation and is best avoided. Its venom, like the Adders, is only mildly harmful however, it has caused rare fatalities so get any bites looked at by a medical professional.

The only non-viper on our list the East Montpellier Snake is also the least dangerous of the venomous snakes in Greece. Although mildly venomous and able to cause some harm to humans, this snake is a low risk due to the nature of its fangs. Unlike vipers, the Eastern Montpellier is a rear-fanged snake, meaning that its fangs are in the rear of its mouth. To inject venom this snake must move its prey to the back of its mouth before sinking its fangs in and injecting the venom. This is a trickier procedure for large prey than it is for mice and lizards, which it can incapacitate quickly. There have been some rare cases of humans bitten by these snakes. The reaction to the venom in those cases was mild, (pain, swelling, occasional fever) and the symptoms were easily treated or abated soon after the bite.

But despite their low bite rate, you might still feel a jolt of fear if you spot one. These rear-fanged reptiles can grow to 2 or 2.5 meters long. So you’d be forgiven for forgetting their lack of danger if you come across one whilst out on a walk. They live on Mainland Greece as well as several of the islands, including Corfu, Thasos, Lemnos, Kos, Kefalonia, Zakynthos, and Skiathos. If you’re not too afraid to stop and look, take note of the Eastern Montpellier’s coloring. Rather than the zig-zag patterns of the Greek Vipers, these snakes, the males especially, tend to be a solid block of color. Often they are dark brown or dusky grey, fading to bottle green, with paler stripes down their sides and underbelly. Truly a beautiful sight.

So there you have it, the six dangerous and venomous snakes to seek out or avoid in Greece. If you’re an enthusiast then do your research and head to the correct regions to be in with a chance of spotting some rare species.

If you’re not a snake fan, don’t worry, there are simple steps you can take to prepare for your trip. Firstly, consider where you’re visiting. If you’re going to be frequenting the populated bars and beaches of Santorini then you’re far less likely to come across a snake than if you’re going hiking in the mountains. If you do head somewhere where there might be snakes, ask advice from the locals, be respectful of the natural habitat, dress appropriately in sturdy hiking boots and long loose trousers or jeans to protect your feet and ankles.

In the event that you see a snake, stay calm, stay still and allow the snake to make its escape. If it doesn’t move, walk carefully away giving it a wide berth. Never try to move, touch, provoke or confront a snake in any way. Be aware that you are in the snake’s habitat. Respect them, give them their space and remember that many of them are endangered species.

If you do get bitten, stay calm and seek medical help as soon as possible.