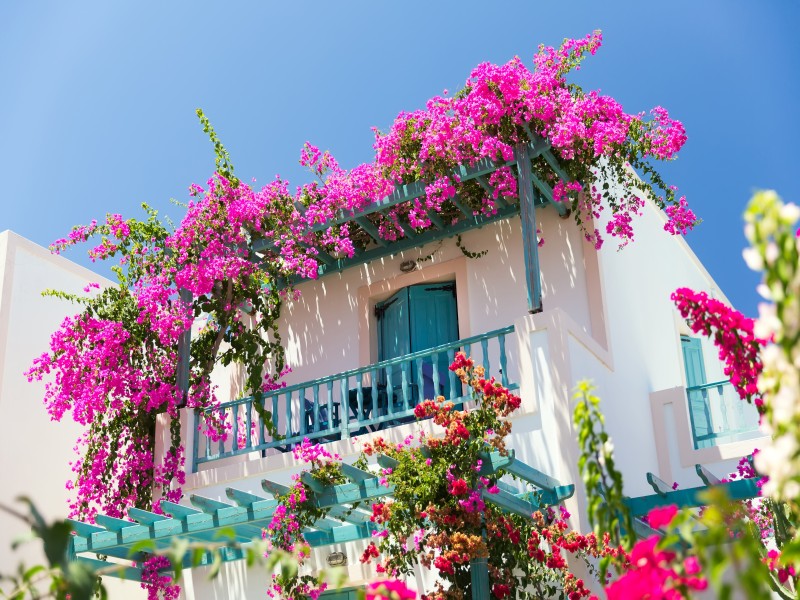 So, you’re heading off to Greece? Great choice. We’d put this land of glimmering islets, see-through seas, fish-sizzling tavernas, and herb-scented mountains up there with the most gorgeous in all of Europe. From the white-sand beaches of Rhodes to the party bars of Mykonos, you’re sure to have an epic time.

One of the true highlights has to be the local Greek people. Uber-friendly, always interested, and with a strong connection to national traditions, they are a fascinating bunch to meet and mingle with. But there’s just one problem: Language!

While it’s true that over 50% of Greeks are now estimated to speak English in some shape or form, it’s never a bad idea to try and get a grip on the local tongue. Cue this guide. It runs through the ins and outs of the Greek lingo and offers a guide to 50 basic Greek phrases that we think every would-be island hopper should have up their sleeve. Notepads at the ready? Let’s begin…

What language do they speak in Greece?

Before we get started, it’s worth laying out some basics. Just in case you didn’t know, they speak Greek in Greece. One of the 24 official languages of the European Union, it’s actually one of the oldest documented languages there is. There’s a history here that spans a whopping 3,400 years, going all the way back to the earliest days of the Linear B tablets of ancient Minoa.

Greek was the language of choice for the iconic civilizations of the Heroic Age and then, later on, city states like Athens and Sparta. Homer used it to write his great epics, The Iliad and The Odyssey, and the New Testament is also thought to have been written in Greek before it was written in Latin. The upshot? This is, without question, one of the most important languages in Western culture.

Modern Greek is a little different to the ancient versions of the language spoken way back when. It’s now common throughout the southern Med, spoken by an estimated 12.5 million people in – naturally – Greece itself, Cyprus, along with large populations in Albania, the Balkan Peninsula, and along the Black Sea coast.

One of the hardest things for English speakers approaching the Greek language is the fact that Greek uses a different alphabet. It’s actually been in use since the 9th century BC, so is far more venerable than many language systems currently in use around the globe.

There was a time when the Greek alphabet came in many forms, with varying numbers of letters and sounds. But that all changed around the 4th century BC, when a common set of 24 letters was agreed upon. This was named the Euclidean alphabet and it’s the one still used today.

You will notice that individual letters look very different to letters in English. That’s because Greek makes use of a whole different script. In fact, writing in Greek looks more like Cyrillic Russian writing than most European languages.

Luckily, Greek is similar to English in that it has five vowels and distinct consonants. It’s also mostly phonetic (meaning every letter makes a sound that doesn’t change, unlike in English), although vowel sounds can change when two vowels are added together to make a letter known as a diphthong.

Here’s a look at the whole Greek alphabet, from alpha to omega, with sounds and examples thrown in to help you get to grips with it:

Where better to begin than with greeting phrases in Greek? You’ll need these ones from the moment you step off the plane and out into the balmy airs of Athens. You could even try them out at passport control if you’re feeling confident…

Let’s move on to the 101 of phrases for folk looking to travel to Greece. These are the words you’ll be using in the simplest of human interactions, from buying your feta-packed pastries in the bakery to saying hello to your hotel host when you arrive in sunny Crete…

Basic Greek phrases to help you travel around

From the soaring Parthenon in Athens to the jaw-dropping beaches of Zakynthos, the bars of Ios to the lookout points of Santorini, Greece is brimming with awesome things to see and do. You can use the following phrases to help you seek out the bucket-list draws wherever you may be in the country…

Greek phrases for hitting the bars

Heading out to hit the rollicking 18-30s pubs of Malia? Looking to get stuck into the pumping EDM bars in the heart of whitewashed Ios Chora? Be sure to do some swatting up on this list of helpful phrases for Greek nightlife…

We know that the food is one of the most important things in Greece for many a traveler. We couldn’t agree more. From sizzling saganaki cheeses to creamy tzatziki, there’s all sorts here just waiting to be sampled. Most tavernas in most touristy spots will have English menus at hand. Some won’t though, so remember…

Some intriguing Greek slang so you can speak like a local

If you really want to fit in and sound like you’ve been speaking Greek since birth, there’s nothing for it but a few classic slang words and terms. These are the phrases that only the locals should know, so get ready to impress your travel buddies…

Last but not least…

Just in case you ever get stuck and simply can’t remember this guide to the most important basic Greek phrases, there’s one get-out-of-jail free card that everyone should memorize…

Oh, yep. And you will almost certainly want to proclaim: