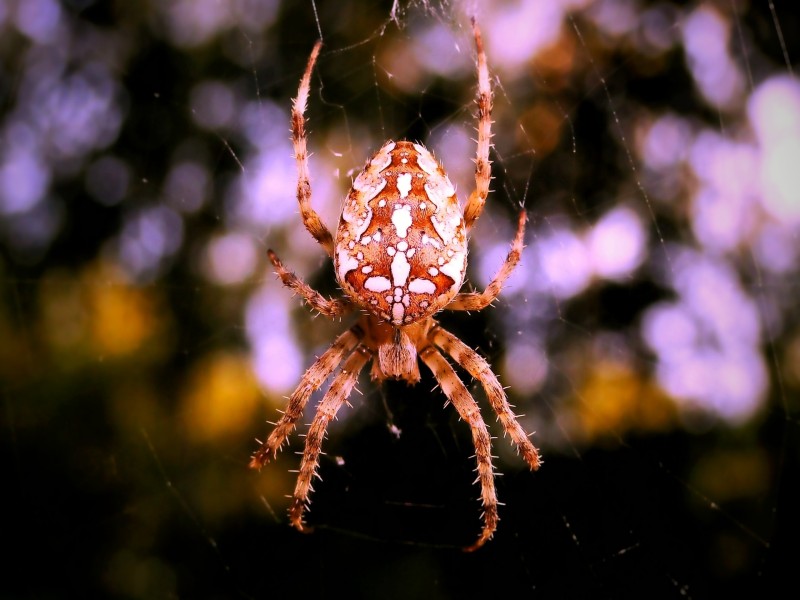 Spiders in Cyprus: 7 Species to Look Out For

The island nation of Cyprus is Europe’s sunniest island and is more readily associated with sprawling beaches, great nightlife, and sumptuous cuisine than creepy crawlies. However, as we edge closer to the Middle East at this end of Europe, you might come across some more exotic wildlife and some unlikely predators.

Cyprus is generally a very safe travel destination when it comes to both human and natural threats. It’s unlikely that Cyprus’s animals will cause any harm to its visitors, but that doesn’t mean there aren’t any dangerous species lurking in its forests, seas, and gardens. Among poisonous snakes, Mediterannean sharks, and irritating insects, Cyprus is also home to several species of spider, some of which pose a threat to humans.

From common garden spiders to tarantulas and black widows, our guide looks at just some of the spiders in Cyprus and where to find them. Let’s get into it.

A genus of the infamous black widow, one of the most poisonous spider species in the world, the Cyprus widow is one of three species of spider on the island with a bite that could be of medical concern to humans. The Cyprus widow has the same shiny black bulbous body of the recognizable black widow, although some can be mottled brown and black with an orange hourglass marking on their backside, instead of the usual blood red one.

Black widows aren’t sizeable, usually reaching the size of a small fingernail, but that doesn’t make them any less daunting. Females also tend to grow as much as one centimeter bigger than male species, reaching 15 mm in total length. Most black widows live for one to three years. They’re not uncommon in Cyprus and can even be found in homes, favoring warm, dry, habitats as well as rubbish tips and under vegetation.

Black widows are one of the most widely distributed spider species in the world, often going unnoticed when nesting with fresh produce and traveling across oceans in shipment containers.

The Cyprus widow is one of 31 species of black widow and their venom can be very painful, although recorded incidents of bites in Cyprus are rare. Medical attention should always be sought after an unidentified spider bite, especially if the victim experiences swelling, pain, muscle cramps, or vomiting, which can last for two to five days after a black widow bite.

Tarantulas are undeniably one of the most feared spiders, but although two native species can be found on the island, a bite from neither one packs enough punch to prove fatal to humans. Found across southern Europe, the European tarantula is one of these species. Males usually grow to 2.5 cm, but can reach 4 cm in body length.

With strong hairy legs and powerful jaws, European tarantulas don’t require potent venom to be formidable predators. This is lucky for humans, as a bite from a tarantula is only likely to cause localized swelling with similar pain to a sting from a wasp or hornet. It’s still advised to seek medical attention if you suffer a suspected bite. The biggest risk comes from infection, which like any wound, no matter the size, can cause death if escalated.

Tarantulas favor dry, well-drained soils in open areas like grassland and desert. Some species live in trees, cliffs, caves, or crops, but most European tarantulas are ground-dwellers. Unlike black widows, they tend to steer clear of urban dwellings and sightings are rare, but the moderate climate and gradual increasing temperatures of the continent are prompting populations to multiply.

The wolf spider, also known as the Cyprus tarantula, is the second genus of tarantula that’s native to Cyprus, and although growing to even bigger sizes with legs as long as 7 cm, they’re nonaggressive in nature and their bite is virtually harmless. They are, however, much more common in Cypriot homes and apartments, and could give arachnophobes a big scare.

They’re sometimes dubbed “dinner plate spiders” due to their size, but this exaggeration is somewhat of an urban myth with their bodies averaging at a scientist-approved 3.5 cm long. Wolf spiders are widely distributed, dwelling everywhere from rainforests and grasslands to suburban lawns and crops. In Cyprus, they’re no strangers to homely bathrooms and might bite if carelessly handled, but they still pose little threat to humans.

Look out for swelling beyond the site of the bite if you do have an unfortunate encounter with a Cyprus tarantula and keep the wound as clean as possible. If pain persists for more than 48 hours, seek medical attention.

Jumping spiders are native to the Mediterannean but can be found in Asia, Africa, the USA, South America, and all over Europe. Jumping spiders are tiny critters and nothing to be scared of, although their bites can cause an uncomfortable itch.

Female jumping spiders can have a body length of up to 9 mm, but males are slightly smaller, and they usually live in stone walls, between bricks in buildings, and also on trees. One of their most recognizable features, if you’re able to get close enough without one jumping away, are their two large, central eyes that make it look like they’re staring right at you. Rather than bestowing them a bad reputation, jumping spiders are often dubbed “cute” because of their doe-eyed look.

Jumping spiders actually have eight eyes, distributed around their heads. For this reason, their eyesight is sharper than any other spider species, despite their small size, and they’re actually incredible hunters when it comes to tracking their tiny prey. Their fascinating ability to springboard themselves incredible distances, around 10 to 50 times their body length, contributes to this.

Jumping spiders normally move fairly slowly, but they can deploy very agile jumps when hunting or fleeing danger. When they want to jump, a sudden change in blood pressure in their legs propels them upwards.

The banded garden spider or banded orb weaver is found throughout North and South America, but has recently made its way to regions of Europe and can be spotted in suburban lawns and woodland across Cyprus.

They build their webs in open areas like tall grass or sparse forest. Females usually reach 15 to 25 millimeters in length, and although slightly smaller than the yellow garden spider, they’re very similar in appearance.

They usually have pale yellow/silver abdomens with several lateral bands or black stripes down their bodies. Their legs also tend to be pale with darker bands. Males are considerably smaller than females, averaging around five millimeters in length with mostly white abdomens.

Banded garden spiders pose very little threat to humans. Even if they did carry venom, their jaws are too small to be able to cause much damage to human flesh and they aren’t aggressive by nature.

Officially the Eusparassus Walckenaeri, the Cyprus huntsman is a genus of the huntsman spider more commonly found in East Africa but now established in large numbers in Cyprus and other parts of the Eastern Mediterranean.

This huntsman is predominantly dark brown to orange-brown with distinct markings or stripes along its entire body, with the legs having the darkest bandings. It’s most recognizable for its large size, with a body reaching up to five centimeters in length and up to 15 centimeters in leg span.

Huntsmen are characteristically aggressive and the venom they use to immobilize prey can inflict nasty wounds when a human is bitten. Huntsman spiders devotedly defend their egg sacs and if they feel under threat, they might strike out. However, Mediterranean huntsman spiders tend to be less aggressive and carry less potent venom than other species. Although painful, bites rarely need serious medical treatment, but several genera of huntsman spider can cause neurological toxin effects on humans if they bite.

Huntsman spiders have a semi-dry habitat, usually dwelling under stones, but they can also be found inside houses in Cyprus where they prey on large insects like cockroaches and lizards.

It may sound unusual, but the lobed Argiope, or Argiope lobata spider, is widely distributed throughout the world and can be found all over southern and eastern Europe. They belong to the family of orb weavers and have a similar appearance to banded garden spiders, with bulbous yellow or silver abdomens, dark slanting annulations, and dark spots in the center of their bodies. Their legs are also yellow with dark bands.

However, what makes them distinct, is that their abdomens are not smooth like other genera, but rather have jagged textures and deep furrows. This trait has earned them the name “lobata”. Like many other spider species, the male Argiopes are also much smaller, while females can reach up to 25 mm in length. When caught in the sun, you might also see that they have tiny, silvery hairs that reflect the light and give them a metallic aesthetic.

They favor dry, stony, and warm habitats, often found in open sand, grasslands, or sun-soaked meadows. Like other orb weaver spiders, they are not dangerous to humans and their poison is only deadly to their small insect prey. Lobed Argiopes are not aggressive, and in the rare case of a bite, you might feel pain and experience localized redness, but wounds generally do not need medical treatment.

Are there scorpions in Cyprus?

Not only do scorpions dwell in Cyprus, but the island even has its own species, endemic to the country. The Mesobuthus Cyprus is a member of the Bluthidae Scorpion family, which are among the most dangerous in other parts of the world. The African Bluthidae is the most deadly scorpion on the continent with venomous stings that can cause death, but the Mesobuthus Cyprus, although lacking data, is thought to only carry moderate venom and no deaths have even been recorded from a sting.

Are there snakes in Cyprus?

Among spiders and scorpions, Cyprus is also home to a number of snake species, both on land and in water. Most Cypriot snakes pose no threat to humans, but there are three species that are venomous, and one with venom that is potent enough to cause serious harm to humans. The Cypriot blunt-nosed viper is Cyprus’s most deadly creature but will only strike if threatened, touched, or stepped on. The Cypriot water snake is the only species of its kind in Cyprus, and although daunting to swimmers, reaching up to one meter in length, it is completely harmless to humans. It does, however, secrete fowl-smelling liquid to deter predators.

Cyprus is generally a very safe country to travel to with low crime rates and a relatively stable political situation, although it is geographically close to countries riddled with terrorism and conflict. Petty crime does happen, especially in touristy areas, but can be prevented.

Cyprus also isn’t a stranger to earthquakes, but most tremors don’t result in serious casualties thanks to government safety procedures and appropriate infrastructure. Be sure to familiarise yourself with earthquake protocol before visiting. The Cyprus coastline, stretching from Pafos to Famagusta, is most prone to tremors, experiencing around 500 minor earthquakes a year. However, there have only been three earthquakes registering above magnitude 6.0 in Cyprus in the last 120 years. 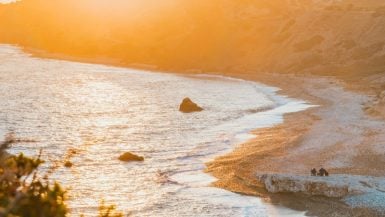 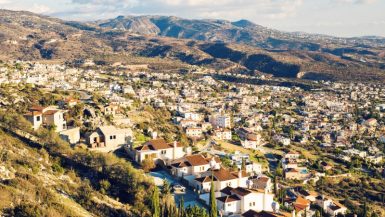