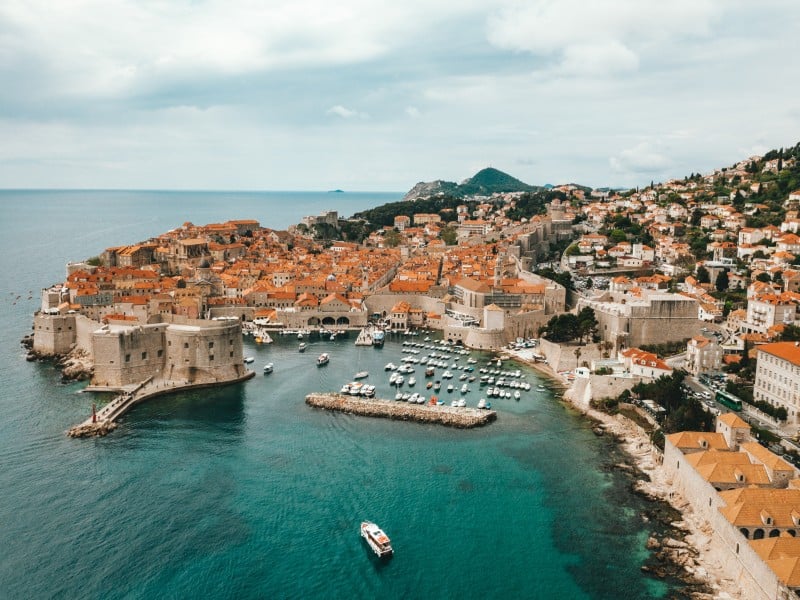 Zagreb vs Dubrovnik: Which Croatian City Is For You?

Planning a trip to Croatia but unsure about Zagreb vs Dubrovnik? Well, don’t worry. Choosing between the country’s capital and its most famous city is not too difficult. Because while these two destinations are both fantastic, they are quite different.

With its enchanting beauty, incredible coastline, fortified old town, and TV fame, Dubrovnik is so well known that many mistake it for the country’s capital. But it’s northern, landlocked Zagreb, with its cafe culture, intriguing architecture, abundant museums, and thriving nightlife that actually holds that title.

We’ll look at the main highlights of these two destinations, the cultural sights, natural beauty, cuisine, climate, and cost, to see how they differ and help you choose the one that suits you best.

Dubrovnik’s beauty has been impressing visitors for years, but its popularity skyrocketed since its appearance in Game of Thrones. The TV series showcased the dramatic, otherworldly beauty of this walled city rising out of sparkling turquoise waters. Now it attracts millions of visitors annually, who come to walk the famous walls for themselves, wander the winding streets and lively squares of the old town and plunge into the cooling waters of the Adriatic.

Smaller than Zagreb, Dubrovnik has a population of only around 40,000. But this number shoots up in the summer months when tourists fly in from all over the world, and cruise ships arrive, depositing visitors by the thousands. The crowds can be overwhelming for some, so planning a trip during the shoulder seasons of June or September is a good idea.

Landlocked Zagreb is often overlooked in favor of Croatia’s beautiful coastline, but those who make the trip are rarely disappointed. A small city with a relaxed vibe, Zagreb is known for its Austro-Hungarian architecture, museums, galleries, parks, street art, nightlife, and excellent cafe scene.

With a population of over 800,000, Zagreb is still substantially smaller than most other European capitals and attracts far fewer visitors. So it can be a great place to visit if you’re not a fan of crowds. However, its popularity is growing as it emerges as the leader of Croatia’s arts and culture scene, so it won’t remain under the radar for long!

Conclusion: Zagreb is bigger but more laid back than tourist favorite Dubrovnik. However, there is a reason Dubrovnik is so popular, the world-famous city is a spectacular sight.

In Dubrovnik, make sure you:

Put these must-dos on your Zagreb itinerary.

Conclusion: There’s no denying that Dubrovnik’s old town and walls are spectacular. But there’s plenty for art, history, and architecture lovers in Zagreb too.

A considerable part of Dubrovnik’s appeal is its location on Croatia’s stunning coastline. Banje Beach on the edge of the Old Town is one of Croatia’s best beaches, with its golden sand, dramatic backdrop, and the signature green-blue of its water. It’s a lively spot filled with sun loungers, beach bars, and watersports rentals. The beaches of the Lapad Peninsula are a little more peaceful, or you can hop on a boat to visit the glorious beaches of nearby islands Hvar and Korcula.

Or, head inland to hike up Dubrovnik’s Mount Srd. This 400m high mountain is well worth the trek for the incredible bird’s eye view of the city below. Grab a lift on the Dubrovnik Cable Car if you can’t manage the hike!

Zagreb is a city with enough leafy parks, gardens, forests, and lakes to keep any nature lover happy. 800-acre Maksimir is the city’s oldest park, but we also love the Botanical Gardens and Zrinjevac Park with its impressive pavilion and fountains.

If that’s not enough nature for you, don’t worry, Zagreb sits at the foothills of Medvednica Mountain (1035m). Hiking the many trails of the Medvednica nature reserve is a popular pastime for the city residents. It’s a peaceful, serene place to escape to when city life becomes too much.

Conclusion: this one’s simple, for coastline, beaches, and islands, visit Dubrovnik. For leafy parks and mountain hiking, it has to be Zagreb.

Dubrovnik’s traditional cuisine has distinctly Mediterranean influences and features an abundance of seafood from the fertile Dalmatian coast. Be sure to try:

Zagreb’s traditional fare comes with Turkish influences rather than Mediterranean. Be sure to try:

Conclusion: both destinations give you the chance to try delicious meals. Zagreb is best for traditional Croatian dishes on a cheaper budget, while Dubrovnik has more diversity and a lot more seafood.

Considering Dubrovnik’s popularity, it might surprise you that Zagreb has the better nightlife. In fact, it often ranks number one in the country. Zagreb has a youthful, vibrant energy and the nightlife of a much bigger city. It’s renowned for its live music venues and thriving club scene, which benefits from Croatia’s lack of curfew rules. Head to Tkalčićeva Street for the most extensive collection of bars and cafes, and don’t be surprised if the coffee shop you’re in turns into a club as the night progresses!

Dubrovnik tends to keep its wild nights for the summer season and is quite a sleepy place during the rest of the year. When it does wake up, you’ll find plenty of late-night taverns, beachside bars, and cliff-top cocktail lounges, but few actual clubs. However, the clubs it does have are of the highest quality and tend to make use of the city’s incredible architecture and dramatic surroundings. Party at Club Revelin inside a 16th-century fortified tower, at Banje Beach Club with its stunning views, or check out the famous Summer Festival held with Fort Lovrijenac as a backdrop.

Conclusion: Zagreb wins this one, it’s home to some of the best nightlife in Croatia.

Due to their geographic differences, these two cities experience quite different climates. Landlocked, northern Zagreb has a continental climate with warm summers and cold winters. The winters are snowy and sometimes foggy, lending the city a cold but magical atmosphere. Summer has some rainy days but is generally hot and sunny. Temperatures average highs of around 28°C (82°F) but have been known to reach upwards of 35 °C (95 °F). This can be overpowering without the benefit of a coastal breeze or the sea to cool off in. As a result, locals tend to abandon the city in the summer and head for the coast. So it can be a peaceful time to explore the city if you don’t mind the heat.

Dubrovnik is on the coast and much further south. It enjoys a Mediterranean climate with mild winters and hot sunny summers. It can be humid, with rainfall and storms common throughout the year. But this doesn’t lessen its appeal as one of Croatia’s premier summer holiday destinations. Daily average temperatures in winter are roughly 9 °C (48 °F), while in the hottest month of August, they average 29 °C (84°F) and can reach the high 30s (100 °F).

Conclusion: Dubrovnik has a milder year-round climate with hotter summers that are more enjoyable on the coast. However, if you like your winter cities frosty, then Zagreb is the one to visit.

Dubrovnik is becoming more expensive as its popularity rises. And prices tend to shoot up further in summer, sometimes to double or triple the cost of other cities in Croatia. Whereas, Zagreb’s relatively unknown status means it’s a much cheaper option than Dubrovnik and more reasonable than most other European capitals.

Conclusion: Zagreb is not only the cheaper of the two but is also reasonable when compared to other European destinations.

Hopefully, you can see that though these two destinations are both beautiful and filled with attractions, they are quite different.

So, if you’re craving a Game of Thrones experience, want to see the fabled walls, and mix a historic city break with a beach vacation, it has to be Dubrovnik. Choose the coastal city if you love Mediterranean flavors and fresh seafood and don’t mind crowds or a higher price tag.

But suppose you don’t care about the beaches and want to visit a laid-back capital city filled with cultural and historic sights and architectural gems? If you want beautiful green spaces, awesome nightlife, and stellar coffee shops, all with fewer crowds and a lower price than other European capitals then Zagreb is the place for you!