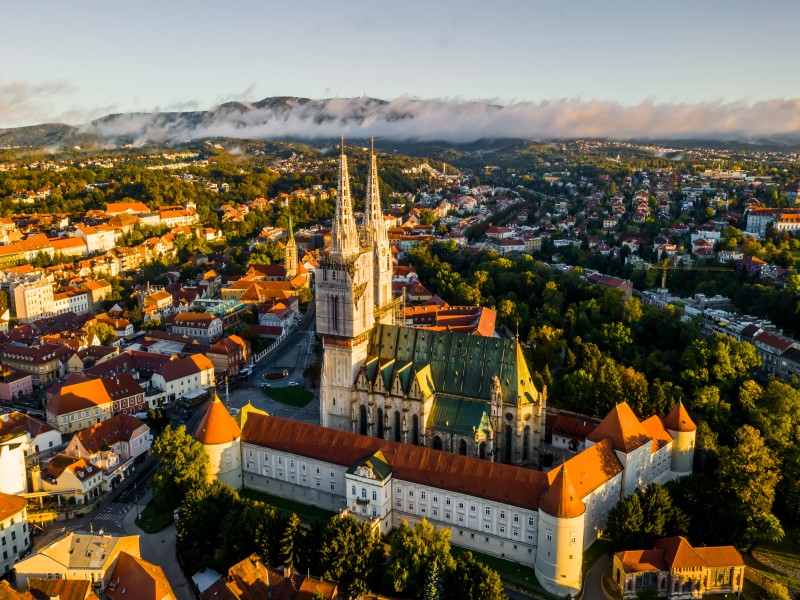 Zagreb Or Zadar? A Guide To Picking A Croatian Town

The choice between Zagreb or Zadar is a choice between the big-town capital of Croatia and one of the smaller resorts on the Adriatic coast. That means there are plenty of differences between the two of them, which should be a gift when you come to pick the one that’s right for you this season.

This guide will run through the lot, from the nightlife scenes to the offering of day trips that each destination brings with it. We’ll also touch on some more practical things about traveling to both, to outline where’s the easiest to reach overall.

The aim? To get you picking the perfect vacation hotspot in the Balkans. So, will it be Zagreb or Zadar this year? The happening Croatian first city or an ancient Roman town with one foot in the sparkling Adriatic waters? You decide…

Zagreb or Zadar for ease of travel?

Although the coastal gateway of Split is creeping up on it these days, Zagreb is still home to the busiest air hub in the whole country. It remains pretty much the sole gateway to Croatia for those coming off long-haul flights, and a major arrival point for short-haul links within the EU. Many of the main cross-Balkan bus and train lines (from Austria and Budapest, for example) will go to the capital, too, making it relatively easy to reach for those watching the carbon emissions and going overland.

Zadar does have its own airport but it’s around a sixth of the size of its compadre in the capital of Zagreb, serving around half a million people each year. There is a growing mix of arrivals, though, on low-costers like easyJet and flag-carriers like Austrian Airlines and Croatia Airlines. It’s harder to reach Zadar by rail, since you probably need to connect through a northern Croatian town if you’re coming in from most places in Europe. However, you can get here by boat – there are regular summertime links across the Adriatic from Ancona in Italy.

Winner: Zagreb – it has the largest airport in the country.

Zagreb or Zadar for things to do?

Zagreb is a journey through the rich history and culture of the nation. The capital has the best museums in Croatia, starting with the Zagreb City Museum (where you’ll learn the history of the city itself) and ending with the quirky Museum of Broken Relationships (the only one of its kind in Europe). You’ll certainly want to set aside some time to do walking tours of the Upper Town, the old quarter of Zagreb that has historic churches and bustling streets lined with cafes. Oh, and the shopping here, mainly centered on the Lower Town (the new area) is the best in the country.

Zadar’s highlight is the Riva promenade. It’s home to a strange duo of attractions known as the Sea Organ and the Sun Salutation – two intriguing installation artworks that channel the power of the Adriatic to give unique light and sound shows in the evenings. Behind that, the second major draw of the city awaits in the form of the old town. It’s huddled on a peninsula with Roman-era ruins and medieval relics, perfect for history buffs looking to get lost.

Zagreb or Zadar for history?

The story of Zagreb reaches back all the way to the age of the Romans. The nearby ruins of Andautonia reveal the settlement that started things off sometime around the 1st century AD. However, the town didn’t really see its golden age until the 16th century, when it was elevated to capital status. Relics of that time still jostle between the narrow lanes of the Upper Town (the most historic part of the capital) in the form of St. Mark’s Church and the muscular Stone Gate. The best way to unravel all that history is with a visit to the town’s acclaimed City Museum.

The historical past of Zadar is perhaps a touch more palpable than it is in the Croatian capital. That’s mainly because the old town here hasn’t been developed over so much. It’s still relatively intact and you can wander the streets to seek out highlights like the Church of St. Mary, a 11th-centuty Benedictine monastery, and the 1500s Duke’s Palace. The oldest remains are Roman here, too, though. So, get ready to check out the undug remains of ancient temples and Roman pillars, along with an archaeological museum with 2,000 years of finds in its collection.

Zagreb or Zadar for nightlife?

Thousands and thousands of students are the lifeblood to the party in Zagreb. They flood the city’s Lower Town bars and Upper Town cocktail lounges in the term time and then move to the more out-of-town super clubs that play EDM until sunup – think venues like Boogaloo, Masters, and Depo. When the summer swings around, many of the students return home. But there’s usually enough travelers passing through to keep things lively, though the action will shift to the old town and the main drag of Radićeva street, which is the closest thing to a strip the capital can muster.

Zadar is the other way around. The summers are far livelier than the term time, though there’s still a good student showing to keep things ticking over in the winter months. Thing is, this coast town is nothing like the hedonistic resorts of Split and Hvar. It’s WAY more chilled and brings more relaxed establishments along its Riva promenade, places for refined sunset wines and cocktails. A smattering of smaller rock bars and clubs in the old town behind help to keep weekend nights going until the later hours if that’s what you’re after.

Zagreb or Zadar for day trips?

Most people go to Zagreb and then make a beeline for the sun-splashed Croatian coast. That’s okay but it’s hardly daytrip territory, as most of the popular resorts of Makarska et al are at least three to four hours’ transfer away. There are some places you can explore on an outing from the big city, though. They are more off-the-beaten-path things, like the Samobor Mountains to the west, which have plenty of lonely hiking paths, and the birding mecca of Lonja field – a vast wetland on the Sava River.

Zadar trumps all that and then some. It’s day-trip territory extraordinaire, with islands, national parks, historic towns, and beaches all on the menu. The places we think you should have close to the top of the list are lovely Ugljan, a long, thin isle with beaches and quaint towns that’s reachable on a fast ferry from Zadar port, and the Kornati National Park, a whole archipelago of idyllic bays and snorkeling reefs. Further south, you can explore the stunning town of Sibenik (some say it’s the most beautiful in all of Croatia) and even the Krka waterfalls (just less than one hour away).

Zagreb or Zadar for nature?

Although Zagreb is among the greener big cities in Europe, we wouldn’t recommend coming here if all you’re after is nature. The fact remains that it’s still a city. A whopping 800,000 people live, work, and play within its confines and you’re more likely to encounter a rattling tram than a primeval dash of woodland. The best places to head if you need a break from the hubbub of modern life are the parklands of Medvednica hill. They spread out on the north side of the city, offering ski runs by winter and hiking paths by summer. The aforementioned Samobor Mountains are also a good choice if you have your own car.

It’s far easier to break away from Zadar and get your hit of solitude and wilderness. Just hop on a boat and you can be out in the wonderful land of the Zadar Archipelago in less than half an hour. The islands there include little-explored Rava and the reserves of the Kornati National Park. Going in the other direction, the Croatian coastal flats give way to the Dinaric Alps. You can even reach the highest summit in the country at Dinara, though that takes about two hours. Better are the Krka falls and lakes, some hour’s drive to the south.

Zagreb or Zadar for general vibe?

We have a bit of a soft spot for Zagreb. It’s not Europe’s most striking or landmark-rich city. It’s not got the metropolitan buzz of Paris or London. However, it’s a real charmer, with a buzzy, youthful vibe carrying on through the café-rimmed streets of a lovely Lower and Upper town. We also like that it remains a little of the beaten track as city-break hubs go, so you don’t get the same overload of tourist crowds here as in other Balkan getaways. The only real downside is that it’s possible to feel a little stuck in the city during the hot summer months this far from the famous Croatian coast.

Zadar also benefits from not being the overly touristic option on its stretch of shoreline. The town certainly feels more lived-in than its neighbors of Split and Dubrovnik. It’s also smaller than Zagreb by quite some way (you’re looking at just 75,000 people to nearly a million!), which means it’s better for those on the hunt for something more chilled. Of course, the proximity of the Adriatic and the beaches help with that – you’re never too far from a sun-kissed cove or sunset spot here.

Zagreb or Zadar – our conclusion

There’s no doubt that both these destinations have something special going for them. Zagreb is the bustling capital of Croatia. It’s got fantastic museums and a very youthful, studenty vibe that helps bring wild nightlife and great café culture. Just bear in mind that it’s quite far from the coast and that means you’ll need to travel to hit the beaches and the Adriatic isles. Zadar is the option to go for if you want to swim and sunbathe, but it’s also got its own rich Roman history and an abundant array of potential day-trip opportunities.