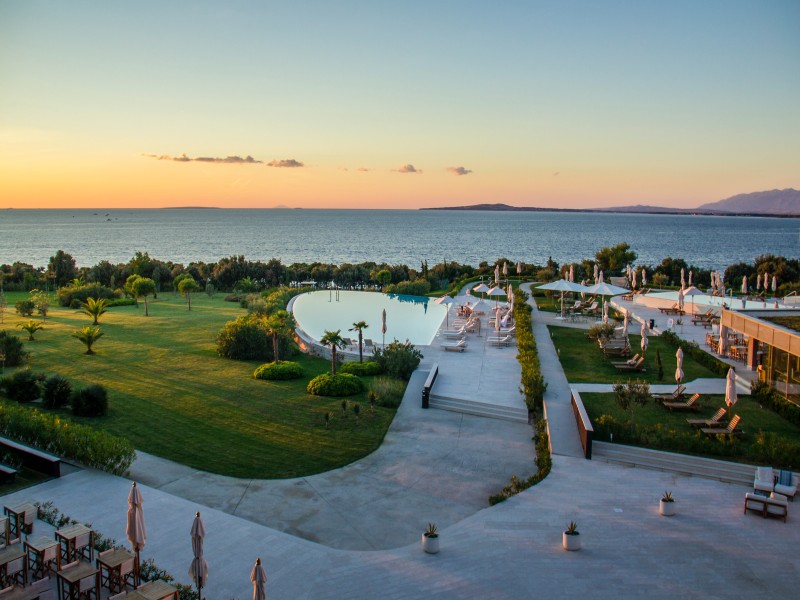 Can’t pick between Zadar or Dubrovnik? You’ve come to the right place. This guide is all about weighing up the differences between these two much-loved Croatian escapes on the side of the shimmering Adriatic Sea.

It’s got insights into all the various facets of both towns. We’ll take a look at which offers the most eye-watering history sights. We’ll unearth the most beach-heavy destination of the bunch. We’ll even peer into the wild nightlife scenes to see which town comes with the most pumping clubs and bars.

We think you’ll find that there are both similarities and differences in the duo. Zadar, for its part, is a touch quieter than uber-famous Dubrovnik for reasons you’ll come to see. However, both towns still offer see-through snorkeling spots, ancient landmarks, and a fine location beneath the rugged Dinaric Alps.

Zadar or Dubrovnik for ease of travel?

Today, Dubrovnik Airport is the third-largest in the whole country. It’s just behind Zagreb and Split, hosting nearly a million passengers each year. That translates into a clutch of connections that come in from all over Europe, including oodles of direct seasonal links to the UK. Another cohort of travelers arrives here via Dubrovnik Cruise Port, which is one of the largest cruise terminals in the Balkans. Plus, there are the ferries, which can bring you over from Bari in Italy or down from Rijeka further north in Croatia.

Zadar is probably more accessible by road and rail, since it’s a shorter distance from here to Zagreb and the Italian border (and, by extension, the wider Western European railway network). However, Zadar’s own airport isn’t quite as large as the one in Dubrovnik, so you don’t have the same overload of direct airfare options heading here. On top of that, Zadar’s not such a well-established cruise port, so boating over isn’t likely to be on the table.

Zadar or Dubrovnik for sights and attractions?

The sights of Dubrovnik are well known. Many were thrust into the limelight after featuring in the hit HBO series Game of Thrones. Get ready for those amazing 12th-century City Walls, the handsome carved colonnades of the Rector’s Palace, and the mighty rises of Lovrijenac fortress, a muscular citadel that keeps watch over the port. Basically, there’s no shortage of monuments and amazing buildings here, almost all of them within easy walking distance of the Stradun strip that cuts through the middle of the old town.

Zadar is also eminently walkable but perhaps a little less stuffed with iconic draws than Dubrovnik. The old core of the city has a Roman Forum and a number of medieval and Renaissance gateways dating from the 1500s onwards. You’ll also get to see the rises of the 9th-century Church of St Donata, along with a smattering of 16th-century palazzos. There are a couple of modern draws on the Riva, too, topped off by the curious Sea Organ that plays music when the swells slosh against the harbors.

Zadar or Dubrovnik for beaches?

One of the great things about a city break to the Croatian coast is that you’re never likely to be too far from a fantastic beach. And so it is with both Dubrovnik and Zadar.

The latter town offers a couple of rocky snorkeling locations on the north side of town (Plaža Borik, Beach Petrčane), and more of the same on the south (Plaža Punta Rožica). However, the piece de resistance of Zadar’s coastline are the islands just off the coast. They are known as the Zadar Archipelago, and they host the turquoise bays of the National Park Kornati – pure bliss if you’re willing to make the boat trip over.

Dubrovnik benefits from having the lovely Lapad Peninsula just to the west of its downtown. It can take nearly an hour to walk all the way to the end of it from Stradun, but the reward is beaches like Uvala Lapad – think quintessential Croatian stuff, with pebbles and blue-tinged H2O. The south of town holds the secret spots that we think trump the lot. Check out Plaža Cavtat to see what we mean. Oh, and then there are the Elafiti Islands, which have sea caves and sandy beaches to suit all.

Zadar or Dubrovnik for nightlife?

Zadar is more of a local’s spot. Its nightlife is driven as much by the student crowd as it is by the summer visitors. That means there’s energy here in the winter months, as there is in the high summer. The main bars dot the Riva promenade (they’re best for sunset drinks) and cluster towards the south side of the Old Town, where they diversify into rollicking rock clubs set to Motorhead and moody jazz bars that swap it all for Miles Davis. Overall, we’d say this is a good place for more chilled nights on the Croatian coast.

Then comes Dubrovnik. The onslaught of tourism here has really helped to plump up the bar offering in recent years. So much so, in fact, that we’d now say that Dubrovnik is among the liveliest cities in the country. Stradun strip is a good place to start. It’s riddled with rakija bars and taverns where you can begin the night with traditional Croatian food. Later, hit up Capitano or Factory for proper EDM club nights. Oh, and you simply MUST go to Cafe Buža for a sundowner – it’s one of the most famous sunset bars in the whole world!

Zadar or Dubrovnik for nature?

You only need look up from the stone-faced streets of Dubrovnik to remind yourself that you’re vacationing in the shadow of the great Dinaric Alps. The high summit of Srđ looms overhead, clocking up 412 meters. You can hike it or be lazy and go on the cable car. The views of the Elafitis and the Adriatic at the top are simply wonderful. Talking of the Elafitis, it’s those islands that really provide the natural playground in this corner of the country. They are riddled with sea caves, snorkeling spots, and hiking paths on high cliffs.

Zadar probably just about wins out here for us, though. The reason? It’s closer to some of Croatia’s most iconic nature reserves. You can head south and find the Krka National Park, where roaring waterfalls roll through woods of hemlock and oak. You can go north to get to the gorges of the Paklenica National Park, a climber’s and hiker’s mecca. What’s more, the idyllic lakes of Plitvička are only 1.5 hours’ drive out.

Zadar or Dubrovnik for price?

There’s no doubt about it – Dubrovnik is the pricier of the two places. Since featuring in Game of Thrones this town has soared in popularity and hotel rates have done the same. Today, you’re looking at hefty fees of something like $200+ a night for the best hotels in the Old Town. However, it’s possible to find cheaper apartments and whatnot in the New Town and around nearby beaches. Overall, it adds up to a daily budget that we’d estimate to be in the region of $100 per person, per day.

Zadar isn’t that bad. It’s still a bit like the Croatia of old, plus there’s a student vibe to it that can help keep the cost of beer and food nice and low. The main thing you’ll notice is that hotels won’t be as dear in Zagreb during the high season months. $40-60 is usually enough to score you something pretty darn nice for the night. Overall, a daily budget of $73 per person is a good number to settle on.

Zadar or Dubrovnik for day trips and onward travel?

There are ample opportunities to keep your Croatian odyssey going from Zadar. The whole country opens up from this central point. You could head north to hit the lesser-known isles of the Kvarner Gulf. Even the northerly peninsula of Istria is within a three-hour drive. Most will either go for the stunning isles of the Zadar Archipelago or track south to the famous Makarska Riviera and isles like Hvar that lie beyond Split, though. All should be relatively easy to get to.

Dubrovnik sits so far south in the country that your options are a bit more limited – unless you want to cross the border, that is! The Elafiti Islands are the obvious choice and rarely disappoint, especially Sipan and Lopud. The coastline north of town is also darn fantastic, starting with the village of Zaton. More tempting for adventurers is probably the prospect of crossing into Montenegro or Bosnia, where legendary Kotor Bay and wild Dinaric mountains await in abundance.

Zadar or Dubrovnik – our conclusion

Dubrovnik is one of the most striking cities in the whole world. It looms with castles and ancient walls above a gloriously blue sea. There are beaches within reach and bustling squares filled with handsome medieval palaces. We’d say it’s the bucket-list-topper here, though it does have the downside of big summer crowds and higher prices. Zadar is the option to pick if you want something quieter and more off-the-beaten-track, but also within easy reach of Croatia’s famous central islands and nature reserves.