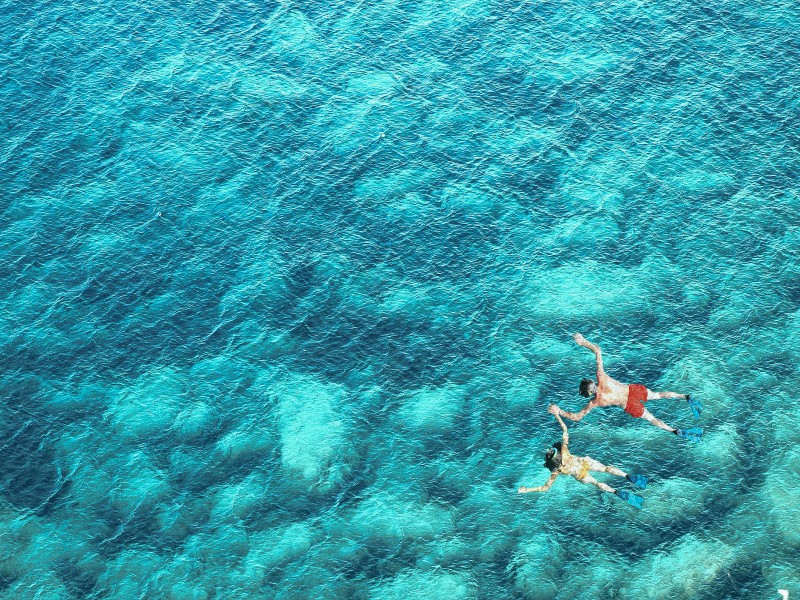 So, you’re on the hunt for the best snorkeling Split can offer? Why not? there aren’t many places better for pulling on the goggles and diving underwater with the blowpipe than this Croatian city on the side of the glass-clear Adriatic Sea.

This guide will run through seven of what we consider to be the very best snorkeling spots in and around the town. We’ve gone for a good mix, including surprising coves within easy walking distance of Diocletian’s Palace and secluded beaches that you might find easier to reach with your own yacht charter.

Generally speaking, the best snorkeling split can offer happens in the summer months between May and September. That’s when the H2O of the Adriatic is at its clearest, warmest, and stillest. However, many of the spots listed below will also offer great marine viewing in the spring and fall shoulder seasons.

A place with a name like the Blue Lagoon will surely never disappoint on the snorkel front, right? Right! This spot is probably the most famous of all the locations in the vicinity of the old Roman city, although it’s best reached either by private yacht or on an organized boat trip since it’s sat just under 14 miles from Split’s port on the island of Otok Drvenik Veli.

What awaits is a shallow sandbar that stretches out for some 300 meters in both directions. It forms between two smaller coastal islands and has both clear and rocky sections. There are oodles of places to drop anchor and dive right into the water here. Alternatively, bag yourself a ride on a glass-bottomed boat and let the driver do the work for you.

One word of warning: The Blue Lagoon gets busy. Like, super busy. It’s one of the main stops on most day-long boat outings from Split harbor. For that reason, we’d either say try to get here real early before the cohort of catamarans turns up or visit in the shoulder seasons of spring and fall.

We wouldn’t really put Kasjuni Beach itself up there with the best snorkeling Split can offer if it weren’t for the rocky headlands that flank both sides of the bay. Those are the spots you’ll want to track down if you’re keen to see any marine life, mainly because this pebbly stretch of sand usually gets too busy with bobbing swimmers and sunbathers to offer sightings of any exotic creatures.

On the flip side, Kasjuni Beach is one of the most accessible snorkel spots from the downtown of Split. You can literally walk here from the Roman ruins of Diocletian’s Palace – it takes about 50 minutes in all, going along a lovely, wooded path with views over the Dalmatian Islands to the south.

Keep your eyes peeled for alternative, lesser-known snorkel locations as you go. There are plenty dotting the whole of the Marjan Peninsula. The main issue will be access, but there are occasional parts where it’s possible to navigate the rocks and jump straight into the sea. Be careful doing that, though, both for falls and unwanted welcomes from the urchins in the water!

The Pakleni Islands are another potential snorkel day trip from Split, though they’re going to be much further out than the Blue Lagoon. Still, a quick transfer can get you out to the archipelago that strings off the side of uber-lively Hvar in about 1.5 hours from the mainland port, and the ride itself is a pretty stunning one through the heart of Dalmatia.

We’d say the trip is almost certainly worth making. This speckling of wooded rocks is prime snorkel territory. The most famous inlets to dive under are on the south side, at Stari Stani Bay and Taršče Bay, both of which have excellent protection from the oncoming north swells and cross-shore winds.

However, there are also some top spots on the northern shores of the Paklenis. You’ll find urchin-filled reefs around the pebble cove of Duboka Bay. There are shallows filled with big yellow fish and groupers at Otočić Vlaka. And it’s almost always 100% secluded out at Uvala Momića in the west.

Most people will hop on a boat from Split to the island of Brac to make their way straight across the breadth of the landmass to the famous beach of Zlatni rat. That’s good and all – it’s among the prettiest beaches in Europe, no less – but the north coast here is actually way better for snorkelers.

Supetar, the town where the boats come in, is testimony to that. Dock up, hop off the ferry, and start walking westwards from the center. In less than 30 minutes, you can be enjoying the peninsula of Bijeli rat, a softly sloping horn of glowing pebbles with easy-going shallows for beginner snorkelers. Go further and you’ll soon come to Plaža Vela Luka, a pebbly inlet with wooded sides that’s way less busy.

Supetar should be a cinch to reach from Split. The Jadrolinija ferry company runs upwards of 14 sailings each day, taking a mere 50 minutes from start to finish. That’s one seriously easy snorkeling adventure to put together!

The multiple little bays of Stobrec have risen to become a favorite camping and family vacay area. They sit to the east of Split’s main downtown but are linked by public bus and the main coast road, so it should take about 30 minutes to reach from the UNESCO heart of the city. You can even walk it in under two hours!

We mention the spot because it’s probably among the best snorkeling Split can offer for families with the little ones in tow. Yes, the beaches are almost always busy from May onwards. No, there’s not too much in the way of dramatic underwater topography or coral reefs. However, the waters are calm and well patrolled, with good shallow take-off points that won’t be too much of a challenge.

If you do fancy cranking up the level in Stobrec then just mosey down to the town’s OpenSea Diving Center. They’re based on the main harbor here and offer all manner of planned scuba trips throughout the Split area, including expert dives to long-lost shipwrecks!

Vinišće is an hour’s drive west of Split, past the busy port town of Trogir. It’s a breath of quietude on the Croatian coast, where the sprawl of aparthotels is replaced by scented forests of olive trees and Aleppo pines. We also think it’s a corker for snorkelers looking to escape to somewhere less explored.

It’s important to know that Vinišće is the town at the center of the area. There’s no snorkeling in the town itself because it’s largely given over to quite a busy fishing marina which has too much boat traffic. However, there are plenty of spots in the vicinity…

They include the glass-clear bay of Dzika Beach (a 40-minute walk from the town) and appropriately named Wild Beach (a little over an hour’s walk away). Both are flanked by salt-washed limestone boulders and have all manner of nooks and crannies that fill with silver fish and octopi.

Want to do some snorkeling in Split but really don’t want to stray too far from the city center? Perhaps you don’t have access to a rental car to cruise the coast to the lesser-known spots? Maybe there’s no budget for ferries over to the islands? Firule Beach to the rescue…

This small and buzzy bay on the eastern side of town is a popular lazing spot in the warm summer months. It’s got some okay-ish snorkeling that hits a zenith with the rock reefs that feather off the headland on the western side.

We like Firule the most of all the urban beaches because it’s not got the built-up vibe of Bacvice (Split’s out-and-out party beach) and is far enough from the port to see reduced boat traffic. The area also happens to be a bit of a bargain to stay in, with some affordable apartments and aparthotels just a stone’s throw back from the beach itself.

The best snorkeling Split can offer – our conclusion

The best snorkeling Split can offer takes place on urban coves within easy walking distance of the Old Town and in more distant beaches amid the uber-famous Dalmatian archipelago. Basically, the city is well primed for budding snorkelers looking to explore all the Adriatic Sea has to offer. We’d say that the most accessible spots overall sit on the sides of the Marjan headland west of the center, while some of the finest ones are a touch harder to reach, out amid the islands of Solta and Brac and beyond.