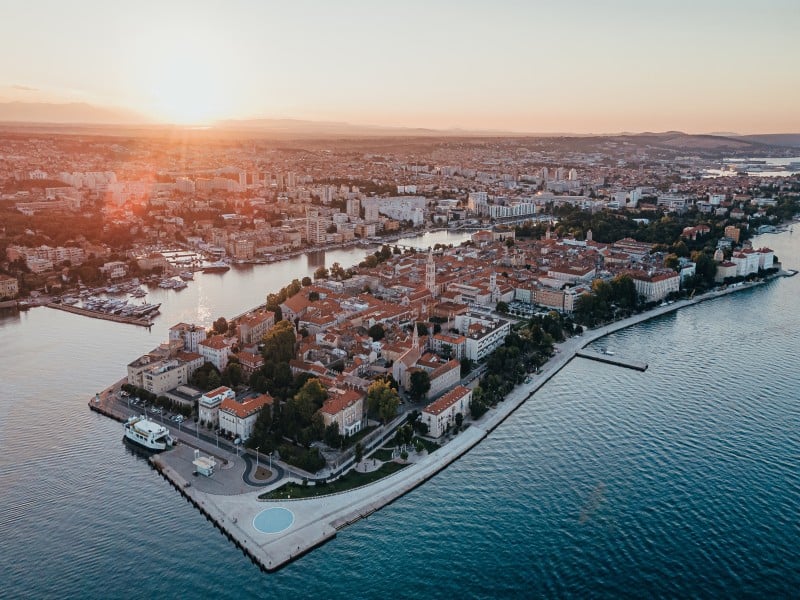 Is Zadar Worth Visiting: 7 Reasons to See This City

Is Zadar worth visiting? This city on the Adriatic Sea is now among the more popular spots on the Croatian coast. It attracts lots of different sorts of travelers, from beach hunters to party groups and families looking to escape to the remote islands in the sea. But what do they come for? Why does this town continue to pull in so many thousands of visitors each year?

There are lots of reasons, actually. They include a pretty old town area that has lots of history, good access to some beautiful national parks, and quite a vibrant nightlife. Lately, Zadar has also been known for its creative foodie scene and the strange Sea Organ, a one-of-a-kind architectural work that makes music from the movement of the waves.

This guide will answer is Zadar worth visiting by looking at seven things that make the city so great. It covers the lovely historic part of town, all the nearby nature reserves there are to explore, and – the thing most people are interested in – the beaches that are on offer.

Zadar is perhaps most famous for its historic old town. Set on a small peninsula, it may not be as picturesque as that of Dubrovnik (which has been on HBO’s Game of Thrones), but that means there are way fewer crowds around.

It’s a web of narrow marble streets winding around a mix of Roman ruins, Venetian architecture, medieval churches, and some relatively modern buildings, too. There are plenty of European-style cafés and restaurants, great for people watching and tasting some local delicacies. The area is best explored on foot since the whole old town is pedestrians only.

The old town is surrounded by UNESCO World Heritage walls that were built between the 12th and 13th centuries and then reinforced by Venetians in the 16th century. Inside, there are over 30 historical churches with the most recognizable being the Church of St Donatus.

Zadar’s night scene isn’t as famous as other Croatian towns. Split and Hvar usually attract partygoers in the summertime. The first is a lively city to the south of Zadar, the gateway to the Dalmatian islands, and the home of the Ultra Music Festival. The second is a glitzy island that’s known for its upscale cocktail bars and yacht clubs.

But you don’t have to go to those to get partying after the sun’s gone on the Adriatic. Zadar does have some very good venues of its own. It’s energetic and lively, fed by a large student population and groups of tourists from around May onwards.

It’s popular to gather in the side streets just off Kovacka on the southwest edge of the old town. They are dotted with small cafés and pubs, which open onto sitting areas outside. Our favorites of the bunch are probably Zlatni Kutić Café Bar (a ramshackle alternative venue with cheap beer) and Caffe 72 (this one has a great terrace).

Zadar also has some options for proper all-night parties. The Garden is a great place to begin. A chilled lounge that’s open to the salty breezes of the sea, it has beanbag sitting and low-key Friday electro sessions. From there, move over to the rowdy Trooper Rock Bar to listen to Iron Maiden until midnight, or go for Jägermeister shots in GUMA Bar.

It’s a gateway to great beaches

If you’re asking yourself whether Zadar is worth visiting for beaches, then the answer is simple: Yes. Croatia has long been renowned for its crystal-clear, warm waters that are great for swimming and snorkeling. Zadar sits close to some spectacular options for enjoying all that, too…

From long stretches of sands and pebbles to coves washed by the warm turquoise waters of the Adriatic Sea, there are plenty of lovely beaches within reach. In fact, some of the most beautiful beaches in the country are just a stone’s throw from Zadar, including…

It’s a gateway to national parks

Zadar is the gateway to four of Croatia’s most wonderful national parks. They can take you deep inside the country or out to the Adriatic Sea, offering a taste of lots of different natural landscapes, from pine woods to mountain valleys and even paradise-like waterfalls. We think they are a must if you’re basing yourself in Zadar for a longer stay, especially as they can all be done on a day trip.

The national parks that you should have on the itinerary here include:

Zadar is worth visiting if you’re looking to get a taste of local Croatian food. The town has a long history of culinary excellence, down to its long history as being one of the centers of the Dalmatian region. There are lots of local dishes that you might want to sample. The best place to do that is in one of the local konoba, which are Croatian tavernas that are usually run by families.

Popular things that you’re likely to find on the menu include:

And don’t forget the wine. Croatian whites are well known for their dry and crisp flavors. The best-known local types are Crljenak, which is often matched with meat, and Marastina (a Chardonnay-based white wine that’s fresh and summery). Finally, finish off with a shot of rakija at the end of your meal.

The Morske orgulje, or the Sea Organ, is now one of the most memorable things to see in Zadar. You can find it sitting on the Riva area of the old town, which is the promenade by the Adriatic. It uses a number of pipes and valves to draw in power from the sea, creating strange and eerie music that people can stop and listen to as they walk by the water’s edge.

The Sea Organ sits only a short walk away from the Monument to the Sun, also known as the Sun Salutation. That’s another creative piece of public art that harnesses the sun’s rays to offer strange light shows when it gets dark. It’s made from many layers of solar panels and produces bright shows of different colors from night until morning.

Both of these help to make Zadar one of the more unique places on the Croatian coast.

There are loads of islands you can visit from Zadar

Last but not least, Zadar isn’t just an awesome city in its own right. It’s also a major base for getting out to see some of Croatia’s most stunning islands. It’s true that the more famous destinations of Hvar and Brac are further south, linked to the mainland via ferries out of Split. However, you can get to more unknown parts of the country from this one…

So, is Zadar worth visiting?

If you’re asking is Zadar worth visiting, then we’ve got the answer: Yes! This is one of the most amazing towns in Croatia. It offers access to some fantastic beaches and islands, but also a very lively nightlife that’s a bit more low-key than places like Hvar. Zadar is also the home of the rather strange Sea Organ, a seafront installation that you won’t forget the sound of!