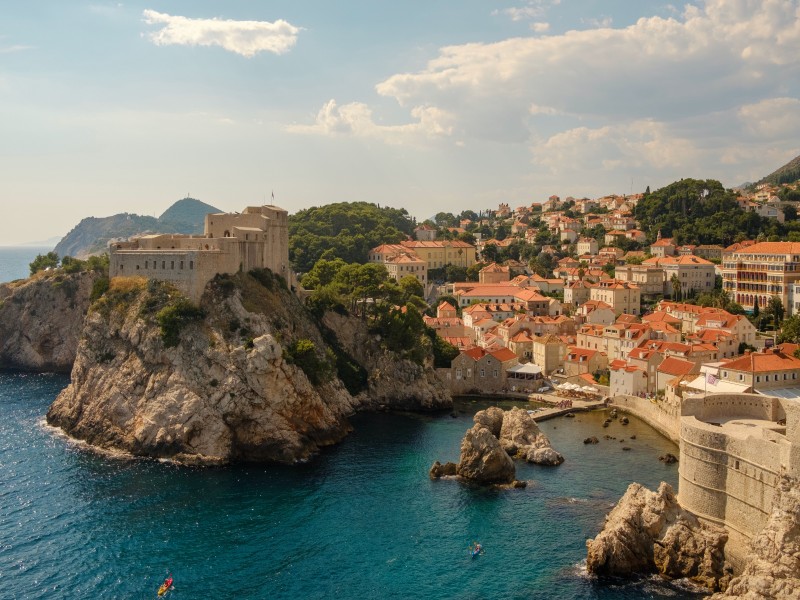 Is Trogir Worth Visiting? 7 Reasons You Need to Go

Croatia has seen a steady increase in tourists in recent years, thanks to its historically rich, vibrant cities, idyllic beaches, magnificent wilderness, and exceptional cuisine. However, people often overlook the magical towns and villages on the coast, choosing neighboring islands like Hvar, Braç, and Korcula instead for their summer breaks.

The small city of Trogir near Split has to be one of our favorite undiscovered gems along the Dalmatian Coast. Trogir’s historic center was declared a UNESCO World Heritage site in 1997 thanks to its fascinating past and mix of architectural influences. With a population of just over 10,000, and affectionately dubbed “Little Venice” due to its host of narrow streets, it’s an excellent place to recharge your batteries.

For those of you who need even further convincing, we’ve created this guide with seven reasons you need to visit Trogir that we’re certain will turn the tides in this underrated Adriatic highlight’s favor. Let’s get started.

Seeing as it’s much smaller than neighboring cities like Split, Trogir has a much slower pace and more relaxed atmosphere, making it an excellent option for fans of laidback retreats. It’s unsurprisingly gained a reputation for its gorgeous, historic architecture as well, some of which dates back to the medieval period. Plus, the locals are generally very helpful and friendly, while its small size means that most things are accessible on foot, adding to its easy-going vibe.

This town doesn’t fall short when it comes to quality bars either, and with less traffic than its neighboring cities, there’s more than enough space for tourists to explore to their heart’s content. The seaside promenade serves as the center of action and nightlife, with many of the establishments here offering live music performances, intimate atmospheres, and first-rate cocktails.

However, the town also hosts two popular annual festivals if you’re looking for a slightly livelier experience. These include the KulaKula Festival, which is a three-day summer event in July offering live music at outdoor sites like Kamerlengo Fortress. Then there’s the Moondance Festival, which is an electronic music celebration that takes place at the same venue from the end of July to early August.

Other leisurely activities you can embark on in Trogir include chartering your own boat from the Riva embankment or browsing the Trogir market where you’ll find incredible local produce like olive oils and rakija grappas. Of course, there’s no shortage of gorgeous beaches either, and many of them are uncrowded.

Trogir’s convenient seaside location makes it an excellent base if you want to do a bit of island hopping, while its close proximity to Split airport means it’s fairly easy to reach as well. One of the most popular islands to visit from Trogir is Ciovo, which is a small, rural islet located just off the coast of Split. This charming settlement is only 500 meters long and 250 meters wide and is connected with Trogir via several bridges that cross into its center.

Naturally, there are plenty of other options too, if you’d prefer to get out on the water. Another popular day trip destination is the Blue Cave near Hvar Island, which is famous for its bright blue color caused by daylight entering the cave through an underwater opening in the rock.

However, it’s important to note that there are no direct ferries to Hvar from Trogir, so it’s best to do this via a guided tour unless you want to travel to Split first. Even so, it’s well worth the effort, and undoubtedly one of the top attractions near Trogir. You won’t struggle to find day tours to the nearby islands of Šolta, Čiovo, and Drvenik Island either if you prefer to have everything organized for you in advance. These speedy ferries are generally very affordable too.

What’s more, Trogir’s unique geography is all part of the fun. Although well-connected to the mainland, the historic center occupies its own island in the old town between Ciovo and the mainland. In fact, National Geographic crowned Trogir the best island-city in the world in 2015.

Beach lovers, this one’s for you. Like much of the Dalmatian Coast, you won’t have a hard time finding spectacular bays and secluded coves along the Trogir Riviera. Okrug Beach, located just three miles from the town center, is a great place to start and boasts its own marina, along with plenty of nightlife, and dining options.

There’s also Pantan beach, which is easily accessible by car or public transportation and is best known for its family-friendly, shallow waters, as well as excellent sun-bathing spots. Other popular sandy destinations include Plaza Bucevica, Seget Donji Beach, and Medena Beach.

Those who are keen on venturing a little further could explore some of the other beautiful, sandy bays on Trogir’s neighboring island, Ciovo. Some of our favorites include Slatine Beach, to the east of the island, and the infamous Okrug Copacabana to the south, where you’ll find a slew of beach bars and watersports activities. That being said, you won’t find any beach bars at Slatine Beach, so it would be a good idea to take some snacks and drinks along with you.

Duga beach, also known as Django beach, nestled in the far south of Ciovo near the famous Plaza Labadusa is another great place to visit. With its cystal clear waters, Mediterranean vegetation, pine trees, and surrounding restaurants, it comes as no surprise that it’s regarded as one of the best beaches in Croatia. You’ll even find cozy and affordable, terraced cottages on offer if you want to lodge for a night or two.

You could also visit the aforementioned Labadusa Beach close to Duga Beach, where you’ll be greeted with an enchanting mix of pebble and stone shores, along with rocky sunbathing areas. You shouldn’t miss out on the chance to snorkel and explore the fascinating underwater ecosystem here either, so make sure you pack your goggles.

With a one of the best-preserved historical centers in Central Europe that, in itself, is a UNESCO World Heritage Site, Trogir is something of a living museum, and undoubtedly one of the most historically rich travel destinations in Croatia. As such, you’ll stumble upon charming piazzas and hidden courtyards at every turn during your trip.

Be sure to check out Cipiko Palace, a Venetian-style royal residence located right across from the cathedral of St Lawrence. The interior might be not open to guests, but visitors can admire the grand facade and stroll the grounds in the glorious Croatian sunshine.

The neighboring 13th-century cathedral is well worth a visit too, and boasts three different architectural styles, namely, Gothic, Romanesque, and Baroque, thanks to its 4th-century construction period. You’ll also have the opportunity to climb the narrow staircase to the top of the cathedral bell tower, where you’ll be greeted with awe-inspiring panoramic views of the Trogir landscape.

Another highlight is the magnificent Kamerlengo Castle. It often serves as a venue for summer concerts and events and was constructed towards the end of the 14th century. You won’t find much inside, but it’s fairly inexpensive to visit, and you have the option to climb up and walk the perimeter of its walls, where you’ll be rewarded with gorgeous views over the Old Town and promenade.

It might surprise you to know that this small town has a renowned culinary scene, with many of its local eateries serving delectable traditional Dalmatian cuisine and regional specialties. It’s also a great place to sample the seafood, thanks to its coastal location and thriving marine life.

One of our favorite traditional dishes has to be pasticada, a delightful comfort food consisting of beef marinated in wine vinegar and cooked in a red wine sauce with homemade gnocchi. Although, you definitely shouldn’t skip the rafiol if you have a sweet tooth.

This is the town’s most famous shortbread treat and consists of a sweet pastry made from a very thin dough that is stuffed with an almond filling. Palamida na zeca is another unmissable traditional highlight and consists of grilled fish slices seasoned with salt and black pepper, which are served with onions sautéed in olive oil with garlic and parsley.

Perusing the markets in Trogir is an experience in itself, even if you aren’t buying anything. You can savor local cheeses and wines, and pick up some olive oil, made nearby in Rab, to take home as a souvenir. Trogir’s cuisine is synonymous with fresh, finely-sourced ingredients, and you’ll likely get to choose your fish dinner from the local catch of the day.

One of the perks of visiting Trogir over nearby tourist havens is the attractive prices that are lower than those in Split, Hvar, and even Dubrovnik. For a coastal city, Trogir is fairly reasonable, and if it’s your budget holding you back from Dalmatia, Trogir might just be able to make the Croatian dream a reality.

The average traveler can get by on around kn623 ($87) a day in Trogir, inclusive of accommodation. Your meals can come to around kn200 ($28), while local transportation shouldn’t cost more than kn90 ($12). Local attractions are inexpensive too, with entrance fees ranging from kn40-50 ($5-7) per person, and you can bag a double room in a budget hotel for between $40 and $80 a night.

Trogir has a temperate Mediterranean climate with pleasant summers and mild winters. Temperatures rarely dip below 40 degrees Fahrenheit across the whole year, but the summer heat can be slightly less intense than it is in Hvar, Europe’s sunniest destination, with highs hovering in the late 70s in Trogir from June to August.

Croatia’s climate will be a pull factor wherever you go, but Trogir is a destination you could visit in the peak of the summer and still expect cheaper prices and quieter beaches than nearby hotspots. That said, March to April, and September and October are good times to visit with plenty of blue skies, pleasant weather, and warm seas.

What is Trogir known for?

It might be overshadowed by bustling tourist hubs like Split and Dubrovnik, but Trogir is well-loved for its ancient heritage and best known as one of Central Europe’s most well-preserved medieval towns. The historic center is a monument in itself and a living museum with a variety of Baroque, Romanesque, Gothic, and Renaissance architecture scattered around. The city is also geographically unique, making for wonderful scenery. In fact, National Geographic named Trogir the best island-city in the world in 2015.

How many days do you need in Trogir?

You could easily spend weeks wandering the cobblestone streets, narrow alleyways, ancient buildings, and bustling promenades of Trogir, but we recommend at least two to three days in the city to get a real taste of it. This will give you ample time to climb the St. Lawrence Cathedral tower, stroll the waterfront promenade, explore Cipiko Palace, learn about Kamerlengo Castle, spend a day on the nearby beaches, and watch the sunset over the marina.

When is the best time to visit Trogir?

Trogir, like the rest of the Croatian coast, benefits from a warm and temperate Mediterranean climate with long, hot summers and cooler winters. Trogir is a sizzling destination in the summer months with average highs of 80 degrees Fahrenheit and plenty of blue skies. Still, great weather and school holidays bring crowds of tourists and the city is most expensive at this time of year. Therefore, the best time to visit Trogir is in the shoulder months of May, June, September, and October, when the sea is warm enough for swimming, temperatures hover in the mid-70s, and there are fewer crowds.

Snorkeling in Corfu, Greece: The 5 Best Snorkel Spots
49 mins ago