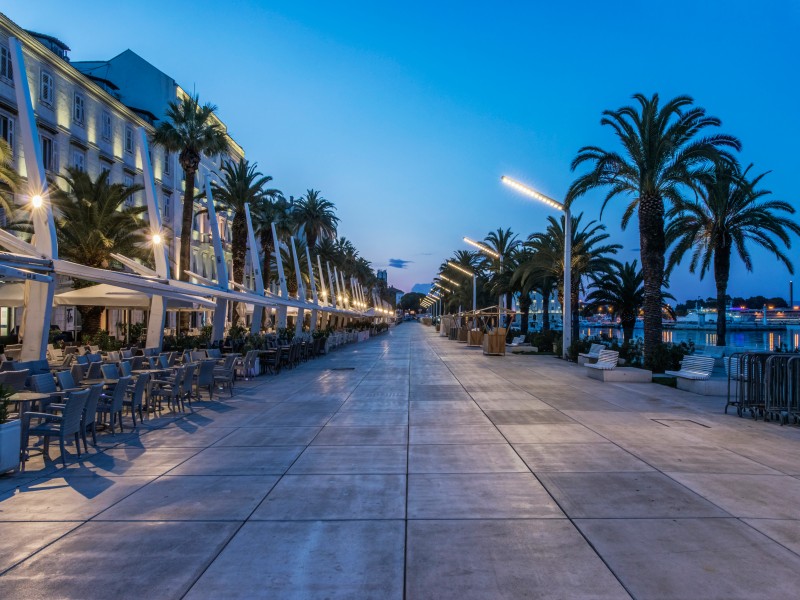 Is Split Worth Visiting? 9 Reasons to Visit Split

Is Split worth visiting? It sure is! One of the most enthralling towns on the whole of the Adriatic Sea, this one draws in nigh on one million people every year. It’s the second-largest city in the country and also the gateway to some of the most sun-kissed islands in the Med.

An historic core that’s a UNESCO World Heritage Site dating from the Roman era kicks things off. Around that, you get glinting pebble coves with see-through waters, pine-fringed shorelines, and soaring mountains crisscrossed by hiking paths. What’s not to love?

This guide will dive in deeper to answer the question “is Split worth visiting?” We’ll take a look at several aspects of the town to see why we think it should be close to the top of anyone’s Croatia bucket list, from the glorious beaches to the ancient relics that abound. Everyone ready? We hope you’ve packed the sunscreen!

Croatia has a lot to do inland but, for most tourists at least, the place to be is the coast. The shoreline of the country is 1,777 km (1104 miles) in length, so there’s certainly no shortage of salt-washed region to enjoy. However, we’d say that Split is one of the definite stand outs of it all. It’s the biggest city on the coast, home of just shy of 180,000 people, meaning it can offer access to everything from idyllic coves to bumping promenades and all sorts in between.

Some of the highlights of the Split coastline are:

On top of all those amazing spots, Split is roughly in the middle of the Croatian coast. That means that you can either travel north or south for an incredible trip that’s laden with even more beaches. You can also simply hop on a boat to visit the nearby islands of Brač, Hvar, and Šolta, where you can discover some of the most famous beaches in the whole Adriatic Sea – including the iconic Golden Horn!

Many countries in southern Europe can be stiflingly hot. For instance, Seville – sometimes called Europe’s frying pan – regularly exceeds temperatures of over 40°C (104°F). If you’re concerned that you can’t cope with that kind of heat, then Split might be the perfect option. Yes, the summers are hot. However, the coastal location means that you get tempering breezes off the water that stop it from ever becoming intolerable.

More specifically, Split boasts a whopping 2,600 hours of sun every year. That’s only just shy of the 2,800 hours that you get in nearby Hvar, which is the official sunniest spot in Croatia. The mercury regularly heads into the 80s throughout the peak months between May and August, and there’s a mere 28mm of rain in July, which usually falls in short, sharp thunderstorms that are pretty fun to watch anyhow.

Is Split worth visiting in the winter? That’s a whole different decision. The cooler months here see the thermometers reading something around the 50-60 F mark most days. That’s not good enough for sunbathing sessions on the beach but okay for seeing the UNESCO sites of Diocletian’s Palace, particularly if you want to pay less for hotels and dodge the crowds.

Split is surrounded by mountains, some of which can be reached within minutes – yep minutes! – of the downtown. Top of the list should be Marjan Hill right next to the city center. At 178 meters (584 ft) high, the top offers spectacular views across the red-tiled roofs of the UNESCO core and beyond. It’s also a part of a nature park on a peninsula that unfolds to the west of the town, covered in a dense Mediterranean pine forest and woven through by hiking trails.

Beyond the city itself, Split is surrounded by the Dinaric Alps. These incredible mountains offer some of Europe’s best hikes. If you’re up for a challenge, consider conquering Mount Mosor, which reaches a whopping elevation of 1,339 meters (4393 ft). There’s also the slightly more easy-going up and down at Mali Kozjak, a peak that has jaw-dropping views of the moraines and rock walls of the inland Dinaric ranges. Oh, and let’s not forget the wonders of the great Biokovo Nature Park. It’s two hours to the south of Split but has the best hiking in the whole country, some say.

It’s easy to be blown away as you walk around Split. The Old Town is filled with seriously venerable buildings that date back some 2,000 years. Much of the area is actually a UNESCO World Heritage Site. It’s known as Diocletian’s Palace and it encompasses a huge complex of gateways, courtyards, defensive walls, and imperial apartments that was raised from the end of the 3rd century AD onwards.

Some of the buildings that you won’t want to miss include the mausoleum of Diocletian, now known as the Christian Cathedral of Saint Domnius, and the Temple of Jupiter, an old pagan worshipping spot that hosts an Egyptian sphinx.

The unique thing here is that the Old Town of Split is still lived in. You can even score hotels in the area, or just settle in for a coffee at one of the street-side joints to wonder at the churches, the red-tiled roofs, and weathered flagstone pavements. Pretty cool, eh?

Split is hailed as the gateway to the Dalmatian Islands. It’s the jump-off point for reaching some of the most iconic destinations in the Adriatic Sea; places edged by gleaming sand stretches and beset by beautiful coves – the sort of holiday meccas you’ve seen on the Croatia travel brochures.

Chief among the islands here has to be Hvar. It’s a long, thin, finger of an island that’s capped off by chic Hvar Town at its western end. There, a buzzy marina is filled with millionaire yachts in the summer months, and the cocktail bars go into overdrive. The town of Stari Grad is also worth a visit if you cross from Split to Hvar, mainly for its moody stone streets and medieval buildings.

There are oodles more islands within a short ferry out of Split’s port, though. You could hit Brac to see the glistening Golden Horn beach of Zlatni rat, often called the best beach in the country, or push on to hidden Vis, where old Yugoslav naval barracks mingle with empty beaches.

For a taste of luxury without the price tag

Split is a city bursting with luxury. Whether you’re chilling in a yacht or drinking cocktails on the promenade, this is a place where you can live pretty darn well. At the same time, though, it’s highly affordable. Croatia is cheaper than 51% of the world’s countries, which is impressive for a safe European nation with a high quality of life. Basically: If you have a low income or want to save money, then you can still live well in Split.

The property market is also highly affordable. There are always new apartments going up and it’s possible to bag yourself a pretty nice pad for well below the EU average. Maybe you want to live in the heart of the Old Town or you’re looking for somewhere right by the beach? Both of those are options.

More recently, Split has established itself as a hub for digital nomads. The reason? There’s good internet and it can beat the likes of Greece, Italy, or Spain on the price front, too. Oh yea, and you can hop on a boat to head to Hvar for the summer parties once you’re done with work for the day!

Split is a fine base for exploring a whole kaleidoscope of places in Croatia. That should hardly come as news, though, what with the rugged mountains and the nature parks of the Dinaric Alps behind and the pine-studded islands of the Adriatic out front.

Most travelers are likely to have their compasses trained west at the coves and old towns of the isles. It’s possible to check lines off the bucket list by going that way, since 1.5-hour ferries can whisk you to the ancient town on Stari Grad on Hvar, a land of swaying lavender fields and seafood kitchens. Others link to even-closer Brac, where the beaches are downright stunning and you get to wander the shopping lanes and quays of pretty Supetar on the north coast.

Sticking to the mainland, you can hit the soaring peaks of Mount Biokovo for hiking and zigzagging scenic drives. Or there’s the legendary beaches of the Makarska Riveira, a land of yachts and browning bodies on the pebbles. The Krka National Park is also within daytrip territory if you don’t mind a longer drive north – it’s home to some of Europe’s most amazing waterfalls.

The festivals and events

Split is a hotspot for summertime festivals. The most notable event here has to be the Ultra Music Festival. That multi-day blowout of EDM, house, and deep house takes place in the city and on the surrounding beaches in the middle of July each year. It turns the whole place into a party, with gigs and DJ shows going on all throughout the weekend.

But it doesn’t end when Ultra ends. Split also hosts the Croatian Chamber Music Festival in September, when you can come to hear stirring medieval plain chant in the churches. Then there’s the Mediterranean Film Festival in June, a 10-day showcasing of the finest independent cinema from Croatia and the globe.

Finally, the isle of Hvar is basically one big festival throughout the whole summer. Catch a ferry from Split to Hvar Town and you’ll see what we mean, especially if you make it down to the salt-washed drinking terraces of the uber-fun Hula Hula Beach Bar.

It’s not for nothing that Split has risen to become one of the most visited places in the whole country. It’s got a great access point thanks to its own airport, it boasts thousands of years of history, there are stunning beaches, and it offers one of the widest arrays of hotel options in the whole of the Balkans. No joke…

From cozy little aparthotels tucked deep into the historic core to big resort palaces gazing at the white pebbles of the Adriatic, you get all sorts here. In fact, Booking.com lists over 3,300 individual properties in Split, which is more than you get on some Greek islands as a whole!

Some of our top picks for stays would be:

Is Split worth visiting? Our conclusion

Is Split worth visiting? Most certainly. In fact, we’d go one further and say that Split might just be the city that’s most worth visiting in Croatia. It’s got so much going for it, starting with that amazing UNESCO core and wealth of Roman and medieval relics. Beaches and coves that get lovely in the hot summer months are the gift in the hot Adriatic summer months, while easy access to the stunning Dalmatian Islands – Brac for beaches, Hvar for parties – is just the cherry on top.