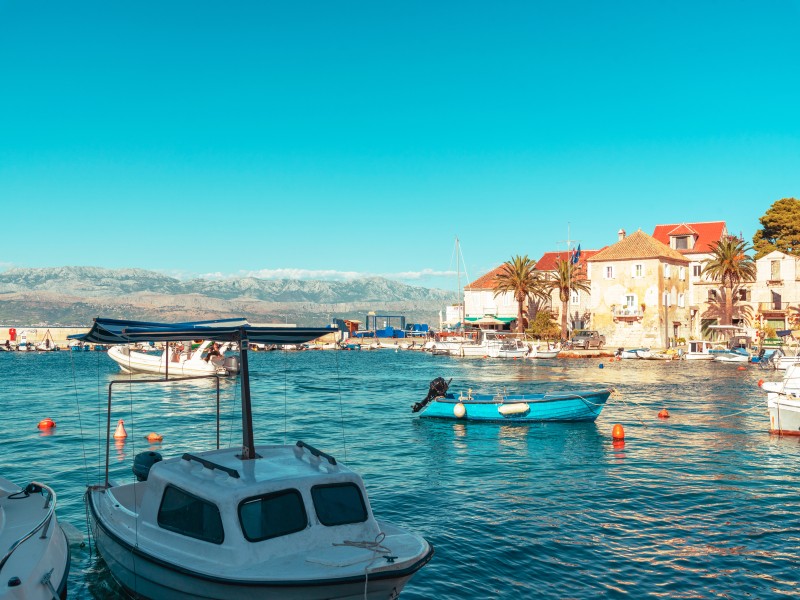 Hvar or Braç: Which Croatian Island is Right For You?

The cities of Dubrovnik and Zagreb have been Croatian tourist favorites for decades, but people often overlook their charming neighboring islands, like the vibrant Hvar and outdoorsy Braç. Located just 21 nautical miles away from each other, both islands are enthralling travel destinations, with each bringing something unique to the table.

Hvar is a bit of a cosmopolitan hub where luxury hotels, romantic vineyards, chic nightclubs, and medieval fortresses harmoniously coexist. While Braç is renowned for its storied history, superb national parks, flourishing wildlife, traditional taverns, and some of the most beautiful beaches Croatia has to offer.

Whether you’re looking for a party-filled getaway, something a bit more laid back, or the best of both worlds, one of these islands is guaranteed to deliver. Naturally, this can make settling on one a bit of a challenge. Luckily for you, we’ve created this guide exploring everything that makes Hvar and Braç worth visiting, so you can make an informed decision. Let’s dive in.

Hvar or Braç: The General Vibe

The island of Hvar has become an increasingly popular tourist destination thanks to its party atmosphere, incredible beaches, jaw-dropping sunsets, and thriving culinary scene. It’s a vibrant location where laidback coastlines meet upmarket restaurants and hotels, and truth be told, it has perfected both vibes. However, Hvar probably isn’t the best place to visit if you’ve been yearning for an easy-going holiday.

Meanwhile, Braç might not have quite the same bubbly atmosphere or culinary scene, but it houses a slew of idyllic mountainous landscapes, and it’s well worth visiting if you’re an adventure enthusiast. It’s fast become a favorite among hikers and cyclists thanks to the island’s beautiful pine forests, and pristine nature parks, offering world-class outdoor activities.

Plus, Braç’s busiest town of Bol is home to a bustling waterfront area lined with charming local eateries, bars, and shops. You’re also likely to come across some awe-inspiring historical architecture, with one of the most interesting sights being the Blaca Monastery, which dates back to the 15th century.

The biggest difference between Hvar and Braç is the nightlife on offer. Hvar hosts some of the world’s top festivals like Ultra, but it also offers a diverse selection of lively nightclubs and bars, while the latter has a charming, albeit much more relaxed nightlife.

Ultimately, when it comes to the general vibe, we think Hvar is the clear winner here, since it offers a mix of leisurely and lively experiences, while Braç tends to be more laid back overall.

Hvar or Braç: The Beaches

Braç has been blessed with a host of pristine, uncrowded beaches, offering unforgettable sunsets, and adventurous water sporting opportunities. As a bonus, you’re also more than likely to chance upon a local restaurant serving delicious Dalmatian cuisine along its shores.

Protruding like a tongue, the iconic Zlatni rat, or Golden Cape, is arguably not only the most unique beach in Braç but the entire Adriatic. With its pine-lined shore, shallow waters, and excellent windsurfing conditions, it’s become a hotspot for fans of the sport and is one of the island’s busiest beaches.

There’s also Murvica, a few miles further west, which is a seafront settlement with only around two dozen inhabitants, housing sites like the Dragon’s Cave, where you’ll find strange murals dating back to the 14th century. You could even pay a visit to the quiet Sutivan beach, which offers the perfect backdrop for a relaxing day out.

Hvar’s pebbly shores shouldn’t be underestimated either, and you’ll find several incredible sandy beaches to the north of the island too. For starters, you could visit Dubovica beach. It’s only reachable via a fairly steep footpath, but it’s well worth the effort, and you’ll be greeted by crystal clear waters, and picturesque blue skies as far as the eye can see. It also houses a homely beach bar with a unique atmosphere.

The enchanting Pokonji Dol beach is another highlight. From the inviting waters to the breathtaking views of the offshore church nearby, it’s certain to melt any beach lover’s heart and unsurprising that it’s one of the island’s most popular beaches. You’ll find plenty of breathtaking bays on its small, neighboring islands too. Be that as it may, Braç is the undeniable champion here since its sandy shores are easier to reach, and generally less crowded, while offering more watersports activities.

Hvar or Braç: The Cost

They might be neighbors, but Hvar and Braç have their disparities when it comes to price. Comparing the day-to-day costs between the two could help you make an informed decision on which island you want to visit and how you want to travel.

Hvar is well known for having a wide variety of affordably priced accommodation to choose from, but since it’s a little more developed than Braç, it’s a slightly pricier travel destination overall. The day clubs, upscale restaurants, and regarded resorts will all come at a slightly higher cost, and day trips, transport, and reaching the island are all going to set you back.

Typically, you can expect a modest hotel room for two to cost between $70 and $100 per night in Hvar, but you’ll pay more for luxury accommodation and a better location, while hotels average at around $76 a night in Braç.

Transportation will set the average tourist back about $40 per day in Hvar, a high expense for such a small destination, but tour guides know how in-demand taxis and boat trips are. In contrast, you can spend as little as $9 in Braç. Although, a holiday based in Hvar Town shouldn’t need much moving around.

When it comes to food, the daily expenses for an average traveler to Hvar’s come to around $33, while day-to-day meals in Braç cost closer to $26. This all depends on your spending habits and Hvar does have more variety, but Braç has cheaper restaurants on average.

Based on these figures, Braç just cinches the title as the less expensive destination, making it an excellent choice if you’re looking for a holiday that’s easy on the wallet. Croatia isn’t the shoestring country it once was, but budget breaks are still very possible wherever you go.

Hvar or Braç: The History

Many of the islands and cities of Croatia have rich histories dating back centuries, with a diverse range of cultural influences being clearly visible throughout the architecture and culture. Hvar’s heritage is particularly interesting, dating back to the early Neolithic period, with many of its landmarks having been around since the 15th century.

Hvar is also widely regarded as one of the birthplaces of organized tourism in Europe and it’s also the only island in the world to house four UNESCO World Heritage Sites. St. Stephen’s Square is a sight to behold itself, anchored by the 17th-century St. Stephen’s Cathedral with its white Romanesque facade. The Hvar Fortress is also a true highlight when it comes to points of interest. Elevated high above the city, 10-minutes up a meandering slope from the city walls, the Spanish fortifications offer sweeping views of the Old Town and Pakleni Islands, made even more magical in the golden glow of sunset.

Although quieter, Braç doesn’t fall short when it comes to history. For starters, you could visit a Dominican Monastery located atop a headland with sweeping sea views. The monastery houses everything from Ancient Greek coins to famous paintings, with monks maintaining its picturesque gardens. Another option is to marvel at the remnants of mosaic floor and Venetian Renaissance art in St Peters Church, which dates back to the 17th century.

You could even peruse the statues of Selca in the Park of Gratitude, where you’ll see three figures of key roleplayers behind the recognition of Croatia as an independent nation. Then there’s the Rasohe Roman quarry located down the coast from Supetar where you can explore historic rock faces.

All things considered, both destinations are fairly evenly matched in terms of opportunities to soak up their respective rich histories, and the winner will largely boil down to personal preference. That being said, we reckon Hvar steals the win here thanks to its host of UNESCO-recognised attractions and iconic Old Town.

Hvar or Braç: Getting There

In terms of location, Hvar and Braç are even contenders. Venturing to both islands will probably involve ferries or boats, but don’t worry, you won’t struggle to reach either destination. Braç is widely regarded as one of the most accessible islands in the Croatian Adriatic, while Hvar is well served with ferries and catamarans which run regularly between Split Town and Stari Grad.

The closest large international airports to Hvar and Braç are Split and Dubrovnik, with Split being slightly closer to both. Braç has its own airport as well, although its use is generally reserved for light aircraft, which come at higher airline prices. The only international flights that land here come from two Italian cities, and Zagreb. If you’re coming from further afield and already booking a connecting flight, Bol airport could serve both Braç and Hvar. After you’ve landed at the airport, you’ll have a choice of taking a public transfer in the form of buses or ferries or taking a private transfer at a higher cost. Otherwise, flying into Split is your best bet.

Split airport is just 18 miles away from the Split ferry port and the ferry journey can take as little as 50 minutes depending on the route.  The regular 55-minute car ferry crossing between Split and the town of Bol means that Braç is fairly easy to get to as well. The car ferry to Hvar, which sails around four times daily, can take longer with some taking up to two hours to reach Stari Grad on the slower route.

When all is said and done, neither of these islands is difficult to reach since both serve as gateways to the Dalmatian coast and Croatian archipelago. That being said, you’ll probably need a ferry transfer to get to your final destination whichever island you choose, which can make them more expensive options than visiting mainland Croatia.

Nevertheless, when weighed up against each other, they’re both well-served by public transport, and as such, it’ll have to be a tie.

When is the best time to visit Braç?

Braç Island benefits from a warm Mediterranean climate with long, hot summers and cooler winters. Located just off the Dalmatian Coast, Braç is among the sunniest destinations in Europe and you can expect clear, blue skies most of the year. The best time to visit for optimum heat is between June and August when average highs hover in the mid-80s. However, school holiday crowds flock to the island at this time and prices are at their highest. Consider visiting in the shoulder seasons from March to May or September and October for plenty of sunshine and fewer tourists.

How many days do you need in Braç?

Braç is a wonderful island with plenty of mysteries to uncover and it’s best enjoyed for a week or two’s break. Still, if you’re pushed for time, two or three days will give you a good taste of what Braç has to offer, making sure you can squeeze in some sights, scenery, and the best beaches.

How do you get around Braç?

Braç isn’t a large island by any means, but the best way to get around with the most freedom is by car. It could take around one hour to drive from one side to the other, which isn’t doable on foot, and the roads are plenty good for larger vehicles. Scooters and quad bikes are popular choices too, especially for reaching Bol. There are public buses that connect the main towns, but they tend to be unreliable. Taxis are another option, but they can be rather pricy.