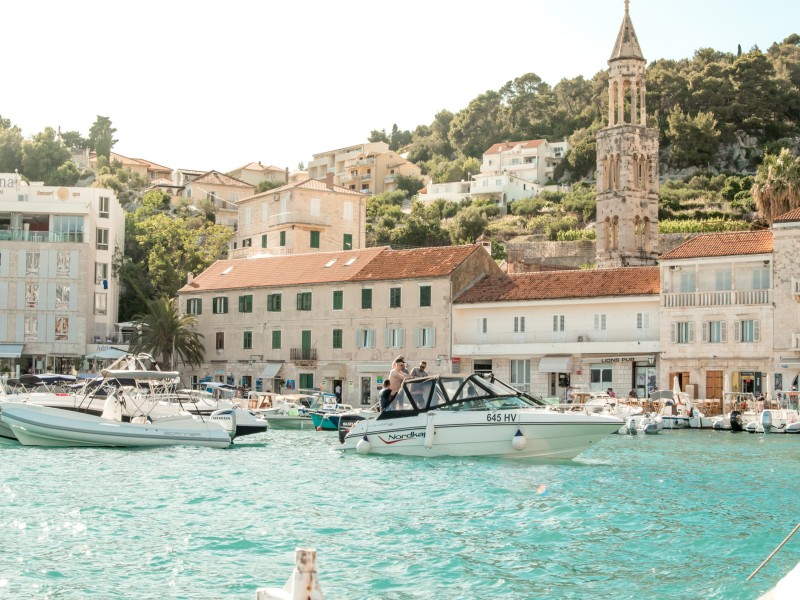 The Best Snorkeling Hvar Can Offer: 5 Spots To Know About

So, you’re on the hunt for the best snorkeling Hvar can offer? This island won’t disappoint. A whopping 45 miles long, it boasts a shoreline of just shy of 160 miles in all. Plus, it’s the main jump-off point for boat trips to the uber-stunning Paklinski Islands and others in the Dalmatian chain. Sounds promising, eh?

That’s because it is. Hvar not only hits the superlatives with the balmiest weather in Croatia (this is one of the sunniest spots in the country) but also manages to come up top for having some of the clearest seas and most inviting snorkeling coves.

This guide will run through just five of what we consider to be the absolute best snorkeling Hvar can muster. It’s got options for those who just want to hop on a boat trip and for those up for a bit more of an adventure, to secret beaches along the hardly-seen southern and northern coasts of the island.

The Paklinski Islands are a squiggle of land that extends straight out of the western end of Hvar Island, not far from the very edge of the opening for Hvar Town’s bustling marina. But they are a whole world away from the hubbub of the harbor bars and the taverns selling Balkan foods. They are quiet, wild, and – here’s the kicker for folks with the bubble pipe and the goggles in tow – 100% primed for snorkeling.

Among the top spots within is tight Taršče Bay. It’s located midway down the main isle of Sveti Klement (Saint Clement in English), cutting in from the open Adriatic for nearly a kilometer in all. You can only get there by boat – either a planned boat trip out of one of Hvar’s ports, or with your own charter yacht. Or you can arrive by using the winding, scrub-fringed walking path that links all the way to the eastern boat jetties of the ACI Marina Palmižana on the island’s eastern end.

What awaits is a very well protected bay with finger-like headlands of salt-caked limestone extending out on both sides. The base of the inlet is shallow and meets a gleaming pebble stone beach. There are other parts where the gnarled olive trees and pines dip low to shadow the water. Common sightings include clusters of seaweed blooms, sardines, small fish, and even sea turtles.

Because Taršče Bay is so long and thin, gets protection from land on three sides, and is rarely as busy as other bays closer to the main town of Hvar, it’s just about perfect for snorkelers. The visibility is usually high, even when there’s a cross-Adriatic swell in the forecast, and you won’t often be disturbed by big crowds of snorkelers. That said, it’s always a good idea to get in early to avoid the day-trip rush.

Leave behind the boat-filled quays of ever-cool Hvar Town and cruise south and east around the base of the island. That’s where you’ll find sleepy little Milna, a town of just a few konoba (traditional Croatian taverns serving age-old Balkan cuisine), seaside hotels, and camping plots. It’s risen to become something of a family favorite and a top spot for travelers who are keen to escape the hedonism of the main town.

The trump card on the snorkeling front has to be the duo of bays that string along the southern side of the town. They’re true Adriatic stuff – think alabaster-tinged pebbles, lightly lapping waters that look like bottled H2O, a framing of pine forests that roll around the base of craggy peaks. Really, it’s the lack of any sand that makes them cracking for diving under and meeting the marine life, as that ups the visibility to something in the region of 20-30m!

We mentioned two bays. The first is Plaža Milna. The second is Mala Milna. We like the latter for snorkeling more since it’s a touch further from the heart of the village and doesn’t tend to get too busy. It’s also flanked by a long wall of rocks that come bristled with urchins and awash with small fish.

To avoid the crowds completely, head across to the hidden secret of Milna: Borča Beach. It’s one bend in the coast to the west of the village and is unquestionably home to some of the best snorkeling Hvar can offer. We’re talking a whole rock reef that dashes just along a shallow entry point on a narrow, rocky beach, complete with clandestine coves filled with multi-colored cuttlefish, crabs, and jellyfish on either side.

Beach Eva is among the hardest spots on this list to get to. But we’d say it’s worth the effort, if only to ensure you get that prized snorkel spot all to yourself. You’ll almost certainly need a rental car. Then, it’s a 20-minute drive through the mountain paths inland from the historic port of Stari Grad, or just over 40 minutes on both the south- and north-coast roads coming from Hvar Town proper. The good news is that even the drive itself is a bit of fun, whizzing through lavender fields and ancient farms.

You’re looking for an almost indiscernible pull over point on the southern roadway that’s little more than a dusty plinth on the side of the highway. If you find it, proceed to walk the zigzag path down to the shoreline and viola: There’s Eva, opening up between high cliffs right in front, shimmering like a turquoise swimming pool that sprouts jagged boulders.

The waves do tend to be a touch stronger here than in, say, Milna. That’s because the opening of Eva Bay is large compared to the smaller coves that usually come up trumps for snorkelers. However, the swells are tempered by the fact that the main beachfront is tucked at a slightly different angle to the oncoming water, which means there’s a section of the beach here that usually remains calm and boasts good visibility.

Eva is blessed with clusters of reef where there are often crabs and starfish clinging to the shallows. You can swim between unusual rock formations and emerge onto lookouts where you can leap right back into the sea when you’re ready to carry on snorkeling. The top draw here is the remoteness of it all, though. There’s a good chance you’ll have Eva all to yourself, even in the peak of the summer months between May and August when Hvar is typically heaving with people. Nice.

Stiniva and the Blue Cave

The Blue Cave isn’t actually on Hvar at all, but it’s so darn famous that it has to have a mention on pretty much any guide to the best snorkeling Hvar has up its sleeve. This amazing natural wonder is carved out of the coast of nearby Biševo Island. That’s a rock that sits roughly 25 miles across the Adriatic from Hvar itself but is a big target for day-tripping RIB and slow boats throughout the main season, so is readily accessible.

Thing is – you don’t even have to get in the water to enjoy the delights of the underwater world here! Truth be told, you’re not even allowed to swim through the Blue Cave. It’s too narrow and there’s regular boat traffic. However, the effect of the light refracting through from the entrance of the grotto to the interior caverns means that you can see virtually all the fish and rock shapes that exist below, all from the comfort of a seat up on deck.

The good news is that most organized trips out to the Blue Cave from Hvar will involve a snorkeling pitstop at Stiniva on the way back. Now that’s a real doozy of a place to go under with the bubble pipe in tow. Cut into the shores on the south side of Vis Island, it’s a strange bay with a colossal flank of rock rising right in front of it, the inky Adriatic softly creeping in.

You can snorkel in the shallows here or paddle around the main headland to see the deeper recesses where there are often jellies and sea turtles to be found in the nooks and crannies. There’s no doubt that the best way to reach Stiniva is by boat because the path down is pretty gnarly stuff on loose pebbles. Plus, it’s one hefty trek from the nearest port with boats back to Hvar itself.

The sole snorkeling option here that lies on the less-trodden north coast of Hvar, Žukova Bay offers seclusion and sea adventures on the cusp of the second-largest town on the island, Stari Grad. Just under 500 meters across at the point where it joins the Adriatic and over a kilometer deep at its longest point, the inlet is a winding, wiggling wealth of small coves and rocky bights where you can go exploring without any crowds of sunbathing bodies to be seen.

The main access point is at Žukova Beach. There’s only a small dash of pebbles before a long plinth of coastal stone takes over. It’s a convenient thing to have, since you can stroll along under the pine forests in search of a good point to jump in with the goggles. Just be sure to check for urchins and bulges in the rock beneath the surface before you hop on in!

We like the eastern shores of Žukova Bay just a little more because they tend to get extra light from the west-facing sun throughout the day. If you come early, the western side tends to be the clearer and the brighter of the two. Common sightings here include sardine schools and sea kelp close to the base of the bay and bigger fish – grouper, monkfish – closer to where it mingles with the open Med.

The parking spot for Žukova Bay is the same as for Vaiana Beach, a more popular beach on the western side of the same peninsula. It’s a 15-minute drive from the core of Stari Grad town and usually gets packed out by 10am most summer mornings. Our advice? Get in as early as you can!

The best snorkeling Hvar can offer – our conclusion

Hvar is an island mainly known for its hedonistic party nights and yacht bars, its edgy beach clubs and its rocking evenings on the town. But it’s also a beach jewel, with oodles of coves and bays for would be swimmers and snorkelers. We’d say that the best snorkeling Hvar can offer is in the lesser-known inlets on the south and north shorelines; places that get good protection from the main south and north swells at different times of the year. There are also spots worthy of note on the nearby Paklinski Islands and in other neighboring members of the Dalmatian archipelago.