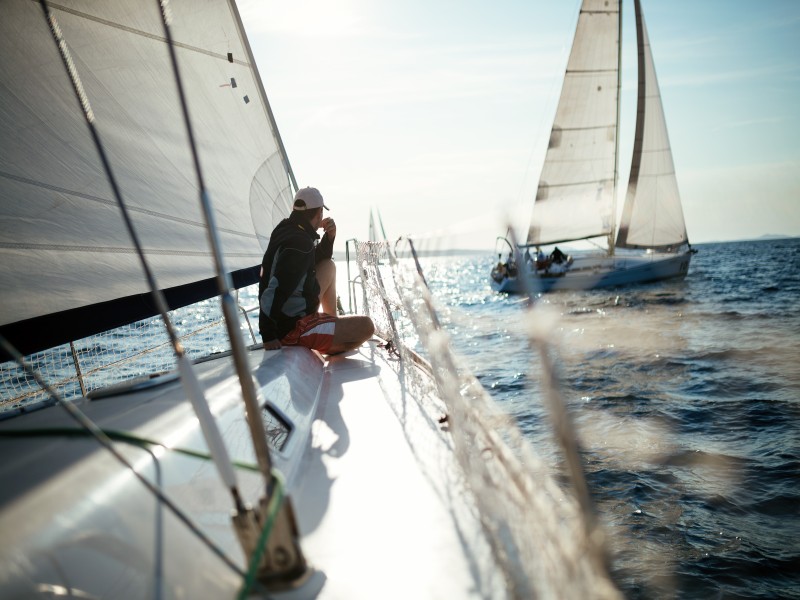 The 7 Best Places To Sail In Croatia: Dalmatia And Beyond

There are stacks and stacks of spots that could make it onto a list of the best places to sail in Croatia. But that’s precisely what you’d expect, right? This country counts a whopping 6,278 kilometers of coastline, oodles of islands, and whole rivieras worth of beaches and beach towns that are primed for summer visitors.

On top of that, it comes with one of the finest climates in Europe for those who like to hoist the mainsail – think regular winds to keep you moving but also seemingly endless sun from May to August. What’s not to love?

If you’re tempted by the prospect of getting on the glimmering waters of the Adriatic Sea this year, then read on. This guide to the best places to sail in Croatia has seven top-quality boating meccas, ranging from the party-loving isle of Hvar to the less-trodden reaches of the Kvarner Gulf and beyond.

There’s no doubt about it for us – Hvar is up there with the very best places to sail in Croatia, and the whole world besides. Come the summer months, this long, thin isle in the southern Adriatic turns into a veritable haven for yachters. People come from far and wide to enjoy the good-time vibes of the main harbor town, which is at the ready with moorings for millionaire yachts and smaller skiffs alike, not to mention more champagne and oyster bars than you can shake a skipper’s license at.

Yes, Hvar has garnered a bit of a rep as a A-list escape and things will cost a pretty penny. But there’s more to it than just chic highballs on the marina. Once you’ve docked, you can head inland to cycle between ancient farms and smell the lavender blooms. Or you can sail around to smaller Stari Grad to see one of the oldest towns in the whole of the Balkans. And then there’s the eastern portion of the island, which is largely undeveloped and untouched, with lonely coves and walking paths.

The thing about Hvar is that it gets busy. If you want a place to anchor and moor the boat, then you’ll need to sort it out long before you arrive or ensure you book onto a sailing tour that already has a place in the bag. We should also counsel that it’s a bit of a hedonistic hub – the parties in Hvar Town start early and go on until at least sunup in the peak of the summer.

The Kvarner Gulf is the northernmost portion of the Croatian Adriatic. It’s wedged between the rocky mainland of Primorje-Gorski Kotar County and the diamond-shaped peninsula of Istria (more on that later), spreading nearly 50 miles from north to south and some 70 miles from east to west at its widest point. That’s plenty of room to go a-sailing.

And there’s plenty to see within, too. Yep, islands like Krk are wedged right into the middle of it. Not as popular with international travelers, it’s actually one of the largest in Croatia and a real favorite for travelers from Central Europe and the Balkans, since it has a convenient road link to Rijeka. But having your own boat means you’d be free to explore the wilder northern coastline away from the mainstay resorts of Baska and Krk town.

There are other highlights of a sailing trip in the Kvarner Gulf. Check out the conjoined isles of Cres and Losinj. They host wild mountains dressed in lush pine woods, but also come with seas that host some of the highest numbers of dolphins in this corner of the Med. Then there’s the eastern haunch of Istria, a land of tiny coves topped by villas and filled with fish-teeming rock reefs for the snorkelers.

Stringing along about 40 miles of the central Croatian coast from the area just south of Split to the little beach village of Gradac, the Makarska Riviera is tried-and-tested vacation territory. Beaches big and small, pebbly and rocky, backed by cafes and backed by the looming Biokovo Mountain, all make an appearance, and there are umpteen marina towns where you can pull in and moor up for long lunches or nights in a hotel.

The coastline here really is something special. The water’s super clean thanks to the absence of long, sandy stretches, and you won’t ever be more than a short sail from a totally empty inlet where you can dive off the deck and into your own private snorkel spot. The places that we think you should certainly have on the itinerary include pine-backed Tucepi Beach and the Seychelles-esque Punta Rata.

The other thing about the Makarska region is that it comes with a taste of terrestrial adventure on the side. Leave the boat behind for a little and you can find yourself on ancient donkey paths weaving through the Dinaric Alps, topping out at lookout points that take in the silhouettes of the wooded Dalmatian Islands in the distance. Just don’t forget to trade the sailing shoes for the hiking boots before doing that!

A total of 13 islands makes up the Elafiti chain. It spreads roughly northwest from the amazing city of Dubrovnik, which is one of the reasons that this is unquestionably one of the best places for sailing in Croatia – you’ll get to explore that eye-watering city before setting off, wandering the stone-faced alleys on the hunt for rakija bars and seeing the famous filming spots from HBO’s Game of Thrones.

From there, plot a course through the Elafitis that takes it one by one. The first pitstop should be Kolocep, a compact little rock shaped like a butterfly that has an incredible swim-in sea grotto on its southwest coast. Next up is Lopud, perhaps the top option for beach lovers thanks to its rare sandy bays.

The finale of it all is the isle of Sipan. That’s the biggest of the whole Elafiti archipelago, measuring just over five miles from top to tail. There are days and days of sailing to be done here, up remote shorelines and to happening coast bars. Don’t miss a stop at the Priježba Beach bar for the sunset and be certain to step foot in Sudurad, a time-stood-still port town on the south coast.

Split is a city that surely needs no introduction. It’s not just among the best places to sail in Croatia It’s one of the best places to visit in Croatia. Period. The reason? How about that UNESCO World Heritage Site old center, where you can walk between ancient Roman court rooms and Byzantine churches? How about urban beaches of see-through water that are just a stone’s throw from the downtown?

Boaters will also be glad to hear that Split is considered a fine jump-off point to some of the most iconic isles in the country. Plot a course straight south and you’ll soon hit Brac. That’s an island of such stunning beaches that they often grace the fronts of Croatian postcards, especially the fabled Golden Horn. Go south some more and you’ll come to Hvar, an island that we’ve dedicated a whole section to on this list (see above).

But you don’t even have to go that far. Split is a day sailor’s dream. Short boat trips to the west can reveal the sleepy port town of Trogir, for coffees on bustling promenades and that sort of thing. Go east and you’ll hit the start of the Makarska Riviera, where smaller settlements like Omis and Medici offer up seriously lovely sections of pebbly shoreline.

Istria is surely one of the best places to sail in Croatia if you’re determined to steer clear of the crowds that flock to Dalmatia and Dubrovnik. The region is the northernmost in the country, spreading south from the mountainous inland from the Slovene border to a craggy cape Kamenjak where the salt-washed boulders tumble into a glass-clear Adriatic Sea.

We could plot a fantastic three- or four-day sailing itinerary down the west coast of the peninsula alone. It would include stints in quaint Porec, a night in lovely Rovinj with its shimmering white church tower, and a finale down in Pula, a town that lays claim to having some of the best Roman ruins this side of the Adriatic.

We’d also say it’s worth spending some time inland here, off the boat. Istria is the olive oil and truffle capital of the Balkans, you see. Rich, tangy fungi and some of the finest bottles of the good stuff are produced in and around the hill village of Motovun. It’s a must for foodies.

Vis is like something out of a dream. Long forgotten from the Croatian map because it spent years as a fenced-off Yugoslav naval base, it now beckons with the promise of undeveloped backcountry and unbusy beaches. It’s the farthest west of the Croatian islands, so expect to do some longer sailing to reach here. Then, the whole isle is your proverbial oyster…

Vis Town usually kicks things off. It’s nestled in a natural harbor on the northwest coast, touting a few little konoba (traditional Croatian taverns that sell equally as traditional Croatian food) and the pebble stretch of Prirovo Beach. From there, it’s easy to launch expeditions that take in the real highlights of Vis, including Okljucna Beach and the Kraljicina Spilja caves of the northern shoreline.

The most distant port town you can get to before skipping across an international border and entering Italian waters is the small town of Komiza. It feels just as it is – unique, untrodden, and cut-off from the bustles of the modern life of the mainland. It is getting more and more popular with sailors though, mainly thanks to its role in the most recent rendition of Mamma Mia!

The best places to sail in Croatia – our conclusion

There are loads of fantastic places to sail in Croatia. The country has islands and rivieras, national parks and enthralling boating towns with histories that go back millennia. In the south, the historic city of Dubrovnik is worth a mention because it offers access to the lovely Elafiti Islands. More central Hvar and Split are fabled sailing havens with plenty of history and summertime hedonism. In the north, we think Istria and the Kvarner Gulf stand out from the crowd, although they are actually the best choices if you want to avoid the crowds in the summer.