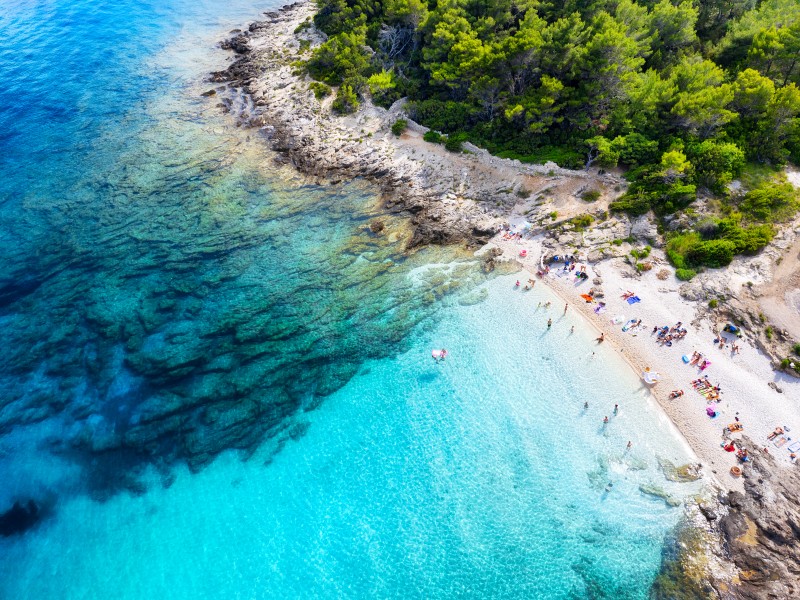 Welcome to a country that counts a whopping 6,278 kilometres of shoreline split between a rugged mainland and islands clad in Aleppo pines, ranging from the top end of the Adriatic right to the base where it rolls into the Greek Ionian. Sounds like the top spot for a summer vacation, right? But where are the best places in Croatia for a beach holiday?

Cue this guide. It’s all about seeking out the crème-de-la-crème of summertime coastal hotspots in the land of truffle-topped pastas and Game of Thrones filming locale. The good news is that it’s not hard to find ones that are sure to whet the appetite and get the wanderlust a-going…

Nope, there are oodles of options when it comes to the best places in Croatia for a beach holiday. You’ve got cities topped by mighty castles that are also flanked by pebble coves where you can go snorkeling to cap off the sightseeing. There are long-lost isles with glinting inlets and white-sand beaches. And there are sleek rivieras awash with hotel-laden resorts. Let’s dive right in…

The Makarska Riviera is a 60km run of some of the most celebrated shoreline in the whole of Croatia – nay, the Balkan region as a whole. It connects the port town of Split to the resort of Gradac in the south, with umpteen beaches, coves, and mountain-shrouded bays beckoning sun seekers in between.

What makes the region such a standout is the imposing presence of the Biokovo Mountain. It’s a point where the Dinaric Alps, a chain that actually runs the whole length of Croatia, lurches super close to the Adriatic Sea. You’ll see the great bluffs of limestone rising overhead as you laze on the pebbles. You’ll smell the aromas of the mid-altitude pine woods wafting down along the light waves.

It’s hardly a surprise that the Makarska Riviera has risen to become one of the top-quality vacation meccas in these parts. It’s now riddled with fantastic hotel choices that have suites with head-on views of the sunset. Check out Bluesun Berulia ($$$) and the five-star escape of Villa Yanko ($$$) for some of the finest.

There’s hardly any other island that can match the beach prowess of Brac. One of the larger members of the Dalmatian chain, it’s the first that you come to as you head south from the port of Split. Ferries leave one for the other up to 10 times daily in the peak season, taking less than 50 minutes from port to port.

You’re likely to arrive into the harbors of Supetar on the north coast. There are some lovely beaches within reach of that. They include the sleepy bay of Plaža Mutnik to the west and swimmable Plaža Likva even further west.

However, Brac really hits its stride on its south side. The piece de resistance of arguably the entire Croatian shoreline awaits in those parts: Zlatni rat. Known as the Golden Horn Beach in English, it’s a perfectly sculpted dash of whitish sand and pebble that extends from a wooded bluff into the Adriatic. Just be sure to visit early since it’s one of the most photographed spots in the whole country and always gets busy!

Dugi…where? We know, we know, this long, winding dash of scrubby mountain that rises like some half-sunken ship from the edge of central Croatia is hardly among the better-known islands in the country. It’s actually a part of the Zadar Archipelago, usually reached on direct ferries out of that smaller port town.

The main reason it deserves a spot on this list of the best places in Croatia for a beach holiday is because it’s home to fabled Sakarun. That’s a beach where the Adriatic does its finest impression of the Caribbean; a 1,000-foot run of impeccably white sand that slopes perfectly into an open bay where there’s a clear bottom in the middle and reefs for the snorkelers on the sides.

You could spend whole holidays lazing there, but it would be a bit of a shame. That’s because Dugi Otok is about much more than Sakarun Beach. There are other places to don the goggles and the bubble pipe, like Veli Žal Beach further south. Eventually, the lovely National Park Kornati takes over with its seal-filled coves and beaches backed by hills of feral sage.

Kite-shaped Istria forms the northwestern haunch of Croatia. It runs from the port town of Rijeka in the Kvarner Gulf all the way to the border with Slovenia on the Adriatic. As it does so, it offers up moments of rugged, rock-cracked shoreline but also romantic towns where you can laze on marble-built quaysides with a Spritz in hand.

We especially love the coast that goes from Rovinj to Pula. The towns there have been heavily influenced by Italian culture. That means you get gelato stalls under Rococo churches. Pula itself even has arguably the finest example of a Roman amphitheater outside of the Eternal City. Anyway, the beaches are often small and pebbly, with impossibly clear blue waters and a shading of coast pines.

For something a touch different, you can track all the way to the southern pinnacle of Istria. The landscape changes there as the headland of Premantura takes over. It’s got topography that gets harder and higher, with heavy cliffs giving way to reefs speckled with urchins and whatnot. We’re talking wilder but just as enticing.

No list of the best places in Croatia for a beach holiday could possibly miss out on what’s now officially the sunniest place in the country. Cue Hvar, a 40-mile-long isle tucked into the midst of the Dalmatian archipelago where there’s a whopping 2,780 hours of the good stuff each year.

The folks here really do know how to make the most of that, too. The western shoreline is capped off by a town that would be right at home on the south side of good-time Ibiza. It’s got a glitzy marina that’s clustered with millionaire yachts from May to September and more champagne bars than you can shake a Slavic dumpling at.

The beaches there are quite popular affairs. Hula Bar and others turn them into party hubs for the summer. However, Hvar still has loads for those who want to escape. Ditch Hvar Town and move through the lavender-scented interior to the south shoreline, which is the province of tiny coves that are almost always deserted.

Dubrovnik might hit the headlines for its eye-watering historical sights and seaside castles, but this town of Game of Thrones pedigree is also beset by some seriously beautiful shoreline. We’d rate it among the best places in Croatia for a beach holiday if you’re keen to pack in both sunbathing sessions and culture-filled walking tours.

The best beaches are surely to the north of the town. They spread out along the Lapad Peninsula, hiding behind a high mountain that’s covered in pine woods. You’re looking at almost an hour’s walk to reach them from the Dubrovnik Old Town, but that opens up the likes of Uvala Lapad Beach, with its uber-transparent waters and backing of charming sunset bars.

If you’re after something closer to the monuments and restaurants, be sure to swing around the coast to find Plaža Danče. It’s a small, jump-off point into the Adriatic that’s fantastic for snorkelers. You can also dive straight into the sea by making your way through the city walls to Buža Bar, which has staircases going from the drinking spots to the H2O.

Last but most certainly not least on our selection of the best places in Croatia for a beach holiday comes the ever-popular isle of Krk. This one gets busy in the summer months, and not only because it’s one of the most accessible isles in the country for folks heading south from the center of the Balkans. It’s also busy because it’s got loads to offer…

Officially the largest island in the Adriatic, it occupies 405 square kilometers. That translates into plenty of coastline for the beach lover. What’s more, every side to the island is a little different. The east is a place of sepia-tinted hills that roll to Mars-like beaches. The west is greener and more Italian looking.

We’d say the best areas for true beach seekers are between Baška and Krk Town on the southern shores. The sheltered bays there include places that look more Greek islands than Croatia. Check out the likes of Oprna Bay and Uvala Vela Draga to see what we mean.

The best places in Croatia for a beach holiday – our conclusion

There are plenty of choices when it comes to the best places in Croatia for beaches. This guide touches on just seven of them. It ranges from the mainland mainstays of Istria and the Makarska Riviera, where you’ll find lux hotels peering out from perches on the side of the Dinaric Alps, to the isles of Dalmatia, steeped in sun and peppered with lonely little coves ripe for exploration. The best time to plan a beach holiday in Croatia is sometime after May. The summer can be busy – and hot – but fall is usually dry and just as nice as June and July.

Snorkeling in Corfu, Greece: The 5 Best Snorkel Spots
40 mins ago