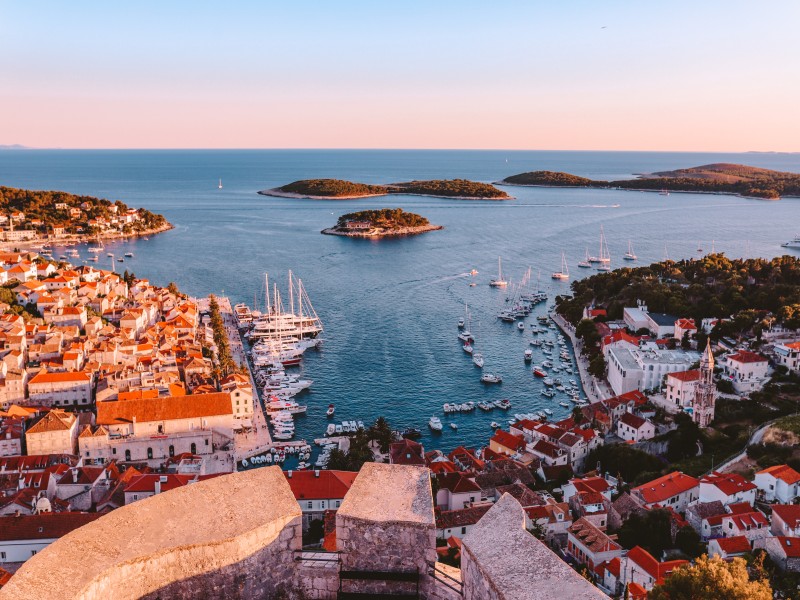 Lavender And Pebble Coves: 5 Best Islands To Visit From Hvar

So, you’re looking for the best islands to visit from Hvar? You’ve come to the right place. This guide will scour the see-through Adriatic waters around Croatia’s uber-famous party island to offer five top-notch suggestions on where to go next. Don’t worry – as you might expect, there are some pretty tempting destinations to pick from in these parts!

We’ve tried to come up with a good mix. One or two are pumping nightlife places where you can keep the party going after leaving the hedonistic hub of Hvar Town. Others are uber-chilled, more off-the-beaten-path options that promise secluded pebble coves and snorkeling spots you don’t have to share with anyone else.

Before we dive right into this salt-washed medley of Dalmatian mainstays, it’s worth saying that all of the islands listed below are easier to get to in the peak of summer. That’s when most of the public ferries are running regularly and when your trip is least likely to be impacted by adverse weather conditions. That said, the very best way to see the lot is with your very own yacht charter if you think you can wrangle one and a skipper to match.

Brac is the island that you can see when you gaze back towards the mountains of the mainland in the direction of Split. It sits in the Dalmatian waters just north of Hvar and is one of the most popular additions to an island hopping itinerary in the region. We’ll get to the main reason why in a moment (Clue: It’s something to do with the beaches), but it’s also worth noting that the ferry connections from here to Hvar are some of the most frequent in Croatia – it takes just 50 minutes to trade the port of Bol for Hvar Town.

Anyway…those beaches. Brac is known for its stunning coastline. In fact, we’d say it’s the best of the best islands to visit from Hvar if you want sands. The most photographed beach in the Adriatic lies in these parts, jutting out of the south coast in the form of the Golden Horn (known locally as Zlatni rat). It’s a glimmering bar of pebble that’s washed by turquoise seas to the east and west. Unbeatable. It’s not the only star, though – check out Slatina Beach and hill-backed Zirje Beach for options that will surely be a touch quieter, especially during the summer peak.

The other pull on Brac is Bol town. It’s one of the more stylo of the resorts in this corner of Croatia. Elegant yachts gather along its quays and sleek boutique lodgings jostle down the shoreline, elegant taverns beckoning with Balkan fine dining in between. If that doesn’t sound like your scene, check out more down-to-earth Supetar on the north coast, which is where you can catch an onward boat to the historic haven of Split.

The Pakleni Islands – also sometimes known as the Paklinski Islands – aren’t just one island, they are many. They string out to the west in a medley of lush rocks topped with twisted olive trees and pines, spreading around seven miles from end to end. It’s normal to think of the group as a single entity, though, because they can be almost fully explored in a single day trip out of Hvar Town – the closest is a mere 1.5km from the main harbor.

There’s something like 10 main islands in the group, along with any number of smaller rocks that just about poke their heads above the gleaming waters of the Adriatic. However, we think you should focus your itinerary on just two of them. Namely, it’s Sveti Klement and Marinkovac that stand out.

Let’s begin with Marinkovac. One of the smaller, eastern members of the chain, this one’s an upside U-shape and a veritable legend on the nightlife front. That’s all down to the Carpe Diem Beach Club that inhabits a wide bay on the south coast. It’s one of the chicest places to come for day drinks and later-on DJ parties in all of the Hvar region and offers the unique experience of partying those summer evenings away on a secluded isle surrounded by the sea.

Sveti Klement is the longest of the Pakleni chain. Its south coast is a bit of a snorkel haven, offering countless coves and inlets where you can jump off the side of your yacht straight into crystal-clear waters inhabited by urchins, jellies, and sea turtles. Beach wise, you can’t beat Palmizana here. It’s a white-tinged mix of pebble and sand with ample boat anchorage and its own seaside bar.

Korčula is a lot like Hvar itself. Vineyards roll through the backcountry. Forests of Aleppo pines cascade down to the rocky shores. There are lavender fields that issue sweet pollen scents into the air come the spring. There are hiking paths through ancient farmsteads. There are stunning towns of red-tiled roofs that hearken back to the Middle Ages. But there are also some key differences that we think make this one a top choice on our list of the best islands to visit from Hvar…

First, Korčula is a whole load more chilled than its compadre to the north. It’s more of a vacation island aimed at couples and families. Let’s take the whole 45-kilometer-long south coast as an example. It’s got runs of soft sand and occasional inlets beneath high cliffs that are downright gorgeous but can go whole months in the summer without seeing any more than a handful of sunbathers.

For the culture lovers, nothing can beat Korčula Town. It juts out of the far western end of the isle onto its own headland. The urban plan makes it unique among late medieval villages, and experts think it was laid out to allow for proper ventilation and cooling in the hot Balkan summer months. It’s also home to a lovely Romanesque church, the Cathedral of St Mark, and Venetian-era monasteries.

Then there’s Korčula’s wine. Crisp, dry white labels are made from the island’s own grape variety (known as pošip). The best of the cellar doors are at the Vitits Winery and the Grosic Winery, but there are also plenty of bars and tasting rooms in Korčula Town to get to if you didn’t want to drive.

Šćedro is a strangely shaped island that scores through the strait between Hvar and Korcula. Historically owned by the lords of Hvar itself, it was used as farm and pastureland on account of its wetter climate and more fertile soils. It was also a favored boat mooring for seafarers and even pirates, who came to make use of the two deep canyons that carve into the coast to offer shelter from the prevailing winds.

Today, Šćedro is seen as a bit of a chilled escape from the energy of Hvar Town. You can hop in one of the daily water taxis that leave from the port of Zavala near Jelsa on the south coast and be there in about 30 minutes.

Boats arrive into an open bay with a speckling of beach bars and Croatian grills that serve local foods doused in local olive oils. There are no cars here, but walking trails lead through the woods to open up the south coast. That’s where we think you get the finest snorkeling, especially in the form of the pebble beach at Plaža Porteruša.

As you walk, keep your eyes peeled for the abandoned quarries and gypsum mines that dot the center. Also, enjoy those lush and thick woodlands of Aleppo pines and twisted Dalmatian oaks – they’re a picture of what developed Hvar used to be!

Vis is a strange one, but also an alluring one. It’s just about the westernmost island in the whole country, sat some 48 miles off the Dalmatian Coast just south of Split. For much of the last 50 years or so, it’s been out of bounds to travelers, given over to the warships and the submarines of the Former Yugoslavia – the whole isle was a protected military outpost. That changed in the 90s, though, and people are now beginning to flock in once more.

What they find is an island that’s far less bustling than Hvar; a place of handsome harbor towns and cliff-topped coves with aquamarine swimming waters. Vis Town is the main arrival point when you come off the boat from Hvar. It’s small and sleepy, with a few bijou inlets lined with pebbles. However, Komiza, the main town on the western shoreline, is our fav. That’s recently featured in Mamma Mia! and comes with lovely stone houses that sit on the doorstep of hiking trails out to wooded shores where no one goes.

Vis also happens to be one of the best jump-off points for exploring the splintering of islands that make up the very fringes of the Croatian archipelago. We’re talking about spots like Biševo and Sveti Andrija. The first is especially famous, mainly for the legendary Blue Grotto cave that carves into its northwestern shoreline. A jaunt there is a must!

The best islands to visit from Hvar – our conclusion

There are plenty of amazing islands to visit from Hvar. From hidden rocks on the western fringes of the Croatian seas that were once Yugoslav military bases to vacation hubs that lay claim to some of the finest beaches in the country, you’ve got all sorts to pick from. Just bear in mind that some will be easier to get to than others, since ferries run more regularly to the popular destinations in this corner of Dalmatia.