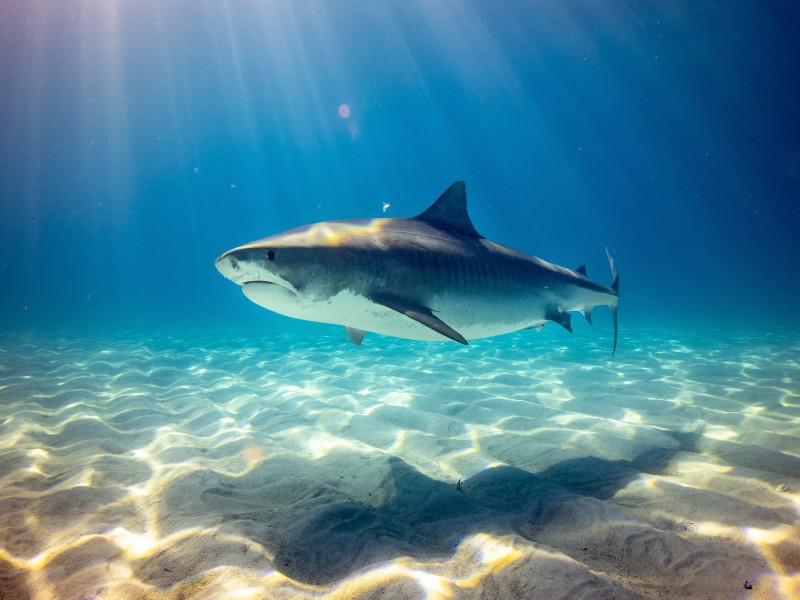 Are There Sharks in Croatia: 7 Species You Can Find There

Are there sharks in Croatia? Are there any species of these marine creatures you should fear? The short answer to both those questions is yes. It might be surprising, but there are around 30 species of sharks in Croatian waters. Luckily, most of them are harmless, and it’s extremely rare to ever see one there.

With over 1,000 miles of beautiful coastline, turquoise waters, and plenty of sunshine, it’s no surprise that Croatia is one of the most popular European holiday destinations. The balmy and crystal-clear waters of the Adriatic are perfect for divers, snorkelers, and swimmers.

While most holidaymakers never even get close to seeing a shark during their Croatian adventures, it doesn’t mean that they’re not lurking beneath the surface of the seas. This guide will answer the question are there sharks in Croatia by talking you through the seven species you might just find in the home of Dubrovnik and truffle-topped pasta.

Are there sharks in Croatia that you should be scared of? The short answer is yes, and that includes one of the most fearsome sea creatures out there: The great white shark. Responsible for the highest number of fatal shark attacks in the world, this one has a reputation as the deadliest marine beast of all. That said, it’s unlikely you’ll spot one around Croatia, since they aren’t common there at all.

Adult great whites can grow up to 20 foot in length and usually weigh no more than 5,000 pounds. That said, there are plenty of much smaller individuals that won’t grow above 15 foot long. They can live till 70 years old. You can recognize them from other species by their color and shape – think a dark grey back that can almost appear black and a contrasting whitish belly. The fact that the colors don’t blend but drastically change is their biggest giveaway.

Despite being depicted in the famous production Jaws as a vicious man-eating creature, scientists believe that great whites are not fond of human meat. They are responsible for the most unprovoked attacks on people, though, so are certainly ones to be cautious of.

It’s possible to see these large creatures in the Adriatic waters around Croatia, but it’s highly unlikely. They usually stick to deep, offshore parts of the seas, rather than the shallow waters near the beaches. Plus, there are actually not many of them living in this part of the world. You’re most likely to approach them if you take a boat trip further away from the coast.

Another aggressive shark you might encounter in Croatia is the shortfin mako shark. Together with the great white, it’s one of the only two dangerous species that live in the Adriatic Sea. That said, it’s classified as endangered, so the chances of spotting one, let alone getting attacked by one in Croatia, are extremely low.

The shortfin mako shark is also known as the blue pointer or bonito shark and can grow up to 13 foot long and weigh no more than 1,300 pounds. They’re usually smaller than that, though. They’re typically metallic blue-grey with whitish colors underneath. They have pointed snouts and crescent-shaped tales. You can recognize them by their characteristic long, thin, and gently tilted teeth that are also visible when their mouths are shut.

Shortfin makos usually live in the deep waters far away from the coast. They’re really fast, which makes them capable of injuring and killing people, but they don’t usually target humans. Most recorded attacks by this specie have been provoked by divers or fishermen. The last sighting of this type of shark in Croatia was back in 2020 in Central Dalmatia.

Blue sharks are a large species that live across almost all seas and oceans, including in parts of the Adriatic Sea off the coast of Croatia. They like deep waters and rarely visit the shoreline, so the chances of spotting this creature while bathing by the coves are, again, very low. Unlike the previous two sharks, these aren’t really dangerous to humans, so there is no need to panic if you happen to see one. In fact, there have only been a handful of biting incidents that involved blue sharks in recorded history, and just four were fatal.

As the name suggests, you can distinguish these sharks by their beautiful deep blue color, which appears on top of their bodies. They have lighter sides that blend into white underneath. They’re long and slender and might grow up to 12 feet but rarely exceed nine. Their diet is rich in squid, small, boneless marine animals, and many species of small fish and sharks.

The latest reported sighting of the blue shark in Croatian waters was in June 2021 off the north coast of Korcula Island. It was a surprising visit, considering how rarely you can see these creatures in the shallow waters near the shore. As mentioned above, they’re not really dangerous to humans and nothing occurred as a result of said sighting.

The angelshark or angel shark is a more innocent representative of the shark family than the three listed above, so there is no need to worry if you happen to cross paths with one. Despite the common misconception that sharks are bulky with a characteristic triangular, dorsal fins, this one has an unusually flattened body. That’s why they’re often mistaken for a ray.

Angel sharks can only grow up to seven feet long and weigh up to 77 pounds. They tend live on the sandy bottom in the relatively shallow parts of the sea. Thanks to their flattened bodies, they can camouflage themselves and wait for prey, which usually are small marine creatures.

Although they were once very common in the Adriatic, angel sharks are now critically endangered due to overfishing. The highest chance to spot one in Croatia is around Molat Island in the Zadar archipelago. Angel sharks are harmless to people but can still give a nasty bite if provoked. If you happen to see one, leave it alone.

The biggest shark that lives in Croatian waters is the basking shark. After the whale shark, it’s the second largest in the world. This gigantic marine beast can grow up to a whopping 30 feet in length and usually weighs around 4.65 tons! Yup, it’s a giant. Seeing this monstrous marine creature with its huge, open mouth can be a terrifying experience. That said, there is no need to be scared because they’re totally harmless to people.

Basking sharks feed on tiny sea creatures, including zooplankton, tiny fish, and invertebrates. Similar to some whales, they use their mouths to filter all that from the water. They’re very slow and often hang around the surface of the water, which makes them an easy target for fishermen. Overfishing has caused a decline in their population, so spotting one around Croatia is extremely rare. The last basking shark sighting in Croatia was in 2015 near Ližnjan, not too far from Pula.

As opposed to the basking shark, the spiny dogfish is the smallest shark on this list. It won’t usually exceed three feet in length, but sometimes you might be lucky to see larger individuals. It lives in shallow waters, so it’s among the most likely sharks to see while bathing in those crystal-clear Croatian waters. Don’t worry though, they don’t present any danger to people.

You can recognize spiny dogfish by their characteristic white spots. Like the majority of sharks, they are grey on top with whiter colors underneath. It has a pointed snout and seven fins in total.

Are there sharks in Croatia that you can eat? It might sound surprising but spiny dogfish is commonly sold as food in many countries across the world, especially in the UK, France, and the US. Much of it comes from Croatian waters, with nearly 50 metric tons exported every year.  That said, Croatia holds only around one percent of the world’s spiny dogfish export share.

The most characteristic part of the common thresher shark is its tail fin. You can easily distinguish it from other species by the long and pointed upper part of the tail, which is often nearly as long as the rest of the shark’s body. Common threshers can reach up to 20 feet in length, half of which is just that elongated back fin!

Unlike many other species of shark, common threshers have relatively small teeth, which means they only pose a minimal threat to humans. They’re also quite shy, so they swim away rather than attack. It is people, though, that take advantage of these marine creatures. They are valued for their meat, liver oil, and fins for commercial use, as well as a common target for recreational anglers.

Common thresher sharks are known to live in Croatian waters but seeing one isn’t an easy task. That said, they like both the open ocean and the coastal parts and often swim close to the surface. Their timid nature means getting close enough to observe is often a challenge.

Are there sharks in Croatia? The conclusion.

Are there sharks in Croatia? Yes! There are around 30 species of these often-feared marine creatures in the Adriatic Sea off the coast of this European country. There are even some dangerous types, which include the man-eating monster from Jaws, the great white shark. Luckily, only two sharks in Croatia’s waters are considered dangerous, and coming across either is extremely unlikely. There were only 25 recorded attacks on humans in the last 100 years here, too, so there is little reason to panic when bathing in the warm blue waters between Pula and Split.