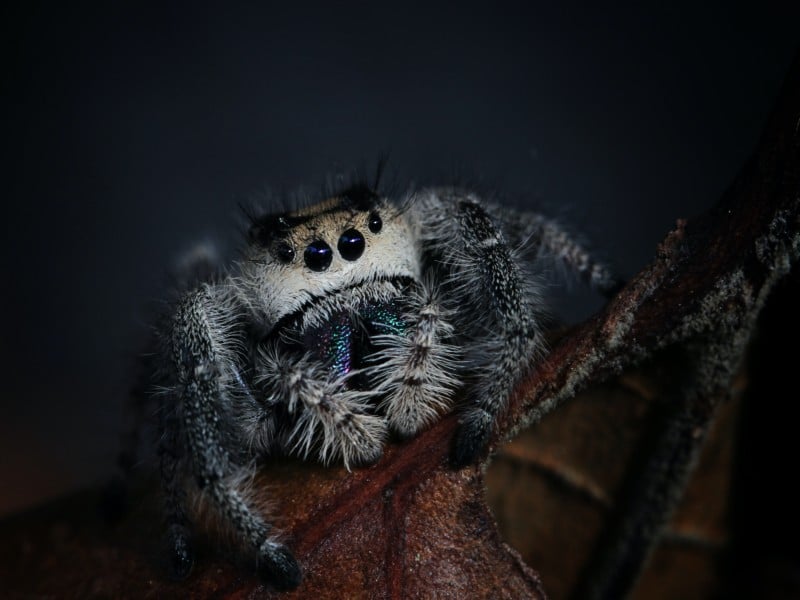 Spiders in Austria: 7 Species You Need To Know About

Austria is a truly beautiful country, known for its stunning natural landscapes. This central European nation is one of the most wooded countries in all of Europe, and its alpine habitats are home to a vast range of animals: from wolves and bears, to groundhogs and snakes. When it comes to creepy crawlies, there are a good number of spiders in Austria – around 46 species to be precise.

Thankfully, the vast majority of spiders in Austria pose no danger at all to humans. You’re much more likely to come across harmless varieties, such as the common house spider, or the harvestman spider, than you are black widows or sac spiders.

That being said, there are a couple of venomous spiders worth looking out for as you explore Austria’s luscious natural landscapes. Join us as we take you through a list of seven notable spiders in Austria.

The wolf spider is the largest spider found in Central Europe. They first migrated to Austria at the turn of the 20th century, though they remain rare. There are many species of Wolf spiders, ranging in size. The ones found in Austria usually reach around 4cm in size. Their body colors are typically brown and yellow, grey, black, and white. The spider’s underside is light grey, cream, or black, often with black or white markings. The sides of their jaws may have a small raised orange spot or ‘boss’.

By day, wolf spiders tend to hide in burrows. They mostly feed on small ground-dwelling invertebrates, mainly insects, but they will attack small vertebrates if given the opportunity. They hunt by jumping on their victims. While Wolf spiders do occasionally bite, the symptoms are usually minor, restricted to local pain or itchiness. Less commonly, symptoms can include swelling, prolonged pain, dizziness, rapid pulse, and nausea.

Next on our list of spiders in Austria is the yellow sac spider. Also known as ‘thorn finger,’ these spiders tend to be around 20 mm long, with orange-red underbellies and pale yellowbacks. During the summertime, they like to hang out on trees, shrubs, and in fields. Unlike most spiders, yellow sac spiders don’t spin webs. Instead, they construct sacs in protected areas.

Yellow sac spiders have caused hysteria in certain parts of Austria in recent years. Reports of sightings of the spider first began to circulate in 2015, initially triggering hundreds of calls to Vienna’s hotline. Yellow sac spiders pack a nasty bite and can become aggressive when disturbed. Most bites occur when they become trapped in clothing. Their venom is neurotoxic and cytotoxic, with bites that have a similar effect as wasp stings: the skin becomes swollen, itchy, numb and a red-bluish color. More severe cases can include chills, fever, headache, and nausea. But while painful, yellow sac spider bites are very rarely life-threatening.

Austria is also home to a population of harvestman spiders. These spiders usually grow to around 1cm in length. They are fairly unremarkable in appearance, with brown or black bodies and spindly legs. Harvestmen spiders are omnivorous, eating other insects and spiders, plant matter, and even the rotting carcasses of birds and mammals. You can usually find them in moist leaf litter, under rotting rocks, logs, or the bark of trees.

Like the majority of spiders found in Austria, harvestmen spiders are completely harmless to humans. They are non-aggressive by nature, non-venomous, and do not bite humans.

While rare, the feared black widow spider has been known to populate certain parts of Austria. Native to North and South America, Black Widows likely arrived in Austria in imported cargo. Black Widows are characterized by a large, mostly black, shiny abdomen with red markings often in the shape of an hourglass with relatively long slim legs. The females are larger than the males, growing to a size of 8-15mm. They get their name from their unusual mating process, whereby the female consumes the male after having sex.

Austria’s climate is well-suited to hardy Black Widow spiders, while their predatory nature means they don’t need specific food in order to survive. They are most frequently found in undisturbed areas such as sheds, disused machinery, and old cupboards. As highly venomous spiders, Black Widows pack a nasty bite. Symptoms include pain, swelling, fever, abdominal pain, muscle spasms, and breathing trouble. The venom is rarely deadly in healthy adults however, if the victim is a child, elderly, or has an underlying health concern, the risks are higher, and emergency medical treatment should be found. However, Black Widows are not aggressive by nature, and bites are rare. When they occur, it’s usually because someone accidentally disturbed their web and the widow reacted defensively.

Austria is home to another species of ‘widow’ spider, known as the false widow spider. These spiders get their name from their resemblance to dangerous black widows, but they are much less threatening than their venomous cousins. These spiders grow to roughly the same size as black widows and have the same shiny black legs and bodies. They also have similar markings that are easily mistaken for the black widow at first glance. However, real black widows have thirteen spots on their backs ranging from white to yellow, orange, or most commonly red. False widows might have markings in any of these colors too, but they’ll be in a different pattern of stripes and bands or perhaps a single spot.

Although false widows do have a venomous bite, the venom is not particularly potent. Usually, the only symptom is pain at the site which may radiate away from the bite. It ordinarily lasts between one and 12 hours, and rarely for more than 24 hours. Often, the symptoms are no worse than the pain of a wasp sting.

Austria is also home to a population of Huntsman Spiders. Huntsman spiders are mostly grey or brown in color, and sometimes have banded legs. Their flat bodies are adapted for living in narrow spaces, such as under loose bark or rock crevices. Huntsman spiders are also sometimes called giant crab spiders, due to their legs, which lay out in a crab-like fashion.

Unlike most spiders, Huntsman spiders don’t spin webs. Instead, they actively hunt for their prey, which is usually insects and other invertebrates. Don’t worry though, Huntsman spiders don’t exhibit the same aggressive behavior towards humans. They are rarely confrontational towards humans, except for when mothers are protecting their young. Their bites do carry venom, but while painful, it’s rarely fatal to humans. If you’re bitten by a huntsman spider, you can expect to see some swelling in the local area. One of the most important things to remember if you’re bitten by a huntsman spider is to stay calm – panicking can speed up the flow of venom through the body, causing a more aggressive reaction. Apply an ice pack and the swelling should go down in a few hours.

The European Sac Spider is another variety of sac spiders sometimes found in Austria. Variations of sac spiders live all over the world, from North and South America to South Africa, Europe, and Japan. These spiders range from light green to pale yellow in color, with brown jaws and bodies that reach up to 9mm in size. Unlike most spiders, sac spiders don’t create webs. As their name suggests, sac spiders like to construct a flat silk sac, where they spend most of their time. This sac may be located in a shielded spot, like where a wall and ceiling meet, or in a leaf.

Sac spiders’ tendency to hunt, rather than trap their prey means that they have a more aggressive nature than other spiders. They can bite when feeling threatened, and carry a necrotic venom that can cause pain, swelling, and lesions in humans. However, their venom is generally considered mild to humans, meaning that bites are not hugely dangerous. However, they can cause trouble if they become infected.

Are spiders in common in Austria?

Austria is home to around 46 species of spiders. This may sound like a lot, but it’s a relatively small number compared to other warmer European nations. The most common spiders in Austria are completely harmless, posing no threat to humans.

Are there poisonous spiders in Austria?

The vast majority of spiders in Austria pose very little threat to humans. However, there are a number of poisonous spiders sometimes spotted in this central European country. The feared black widow is one of the most dangerous spiders in Austria. This much-feared species of spider pack a painful bite that can cause severe swelling, nausea, and vomiting in humans. Similarly, yellow sac spiders are sometimes found in Austria and are best avoided at all costs due to their nasty bites that can cause chills and vomiting in unfortunate victims.

What is the largest spider in Austria?

The wolf spider is the largest spider in Austria – reaching around 4cm in size. While Wolf spiders do occasionally bite, the symptoms are usually minor, restricted to local pain or itchiness. Less commonly, symptoms can include swelling, prolonged pain, dizziness, rapid pulse, and nausea.