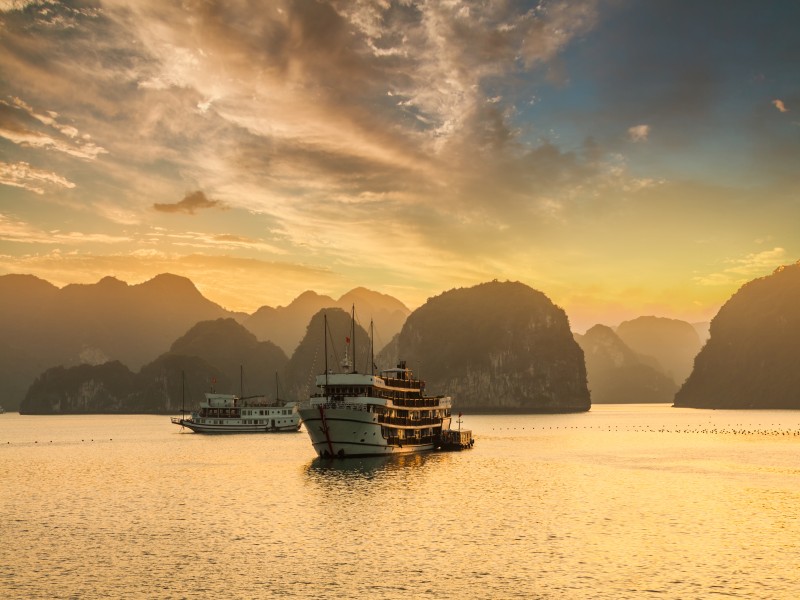 The 5 Most Common Spiders In Vietnam To Know About

Vietnam is one seriously biodiverse corner of Asia. This country spans from the wavy South China Sea all the way to the misty inland hills of Sa Pa along the Laotian border. Between those boundaries, you can encounter snakes and elephants, douc monkeys and curious amphibians by the bucket load. But what about the most common spiders in Vietnam?

Cue this guide. It peers into the arachnid population of this long, thin backbone of Indochina to highlight a couple of species that are regular sightings. They’re a diverse bunch, including big huntsman type spiders and small orb weavers that prefer to live in the local rice paddies.

The bad news is that there are one or two common spiders in Vietnam that can pose a potential threat to humans. However, the overall threat from spiders in this corner of the world is considered very mild, so don’t go letting it ruin that trip to the amazing isles of Ha Long Bay and the floating markets of the Mekong Delta.

The giant golden orb weaver is a regular sighting all over Vietnam and Southeast Asia beyond. For that reason, we put it right up top here on our list of the most common spiders in Vietnam, as one of the eight-legged critters we think that you’re actually pretty likely to encounter during your travels throughout the land of banh mi baguettes and pho broth.

You’ll need to prep yourself for what they look like. Basically, these are no minuscule house spider. They resemble a bent finger, clocking up potential lengths in the region of 20cm in some cases, including the limbs. The females of the species are much larger than the males. They’re the ones you’ll see prowling in their webs. Males are only 2mm-4mm long, and almost unnoticeable next to their feminine compadres.

Giant golden orb weavers like moist, lush habitats away from direct sunlight. That means the rainforests of Vietnam are just about perfect. But also the forests of pretty much anywhere in this balmy and overgrown corner of the world, which is how they survive so well all over the region, from Sri Lanka to Thailand, Malaysia to southern Japan.

Bites from this species aren’t thought to be especially dangerous. They will cause some irritation and there is a light venom that might be injected. However, it’s usually only responsible for moderate holistic symptoms, though sometimes it may require specialist medical treatment.

The giant crab spider is a type of huntsman spider that’s among the most common spiders in Vietnam because of its penchant for living in lush, tropical regions. These guys are thought to have been spread throughout the world by the shipping industry, which brought them to ports far away from their native lands.

You really can’t miss em’. Just as the name implies, the giant crab spider is a giant specimen. Like most all huntsman spiders before it, they are capable of clocking up a total size in excess of 25cm. That makes them larger than some small rodents, and it’s not even factoring the extra mass that comes with the hugely elongated legs, which can often measure more than a human forearm from one end to the other. Yikes!

There’s one saving grace: Hunstman spiders and the giant crab spider aren’t at all dangerous to humans. Yes, they can bite and said bite can cause cuts and pain. However, there’s no venom here that’ll put you in hospital and get you chasing specialist treatment. The truth is that giant crab spiders prefer to stalk their preferred diet of butterflies and large insects, not fully grown men and women.

Strangely, this type of huntsman spider can be observed vibrating and gyrating its lower body during the mating season to impress potential mates. What’s more, they are actually welcomed in many tropical regions around the globe because they are seen as good protection against nuisance insects and mosquitoes.

Whenever you go hiking in Vietnam, be sure to look up. More often than not it’s the grass cross spider of Argiope catenulata that rules the airspace above the trails. Famous for spinning huge webs that can reach a meter across, they adore highly vegetated areas and habitats near rice paddies (of which Vietnam has plenty!).

You’ll notice a grass cross spider for the unusual proportions of its body. The legs are bunched together in front and back groups. They’re spindly and long, with a single turn at the end. The color of the thorax also helps them to stand out – the species displays curious dashes of orange, white, and yellow in spots and lines along its back. They can also be pretty big, measuring a disconcerting couple of centimeters in length from spinneret to fang.

The good news is that most cross spiders aren’t aggressive and don’t have venom that’s known to harm humans. The only risk here really is the direct physical effect of a bite, which can cause local swelling and sharp pains akin to a wasp sting. That said, the chances are that you won’t even get close enough to one to even be at risk of a bite, since this species usually spins webs well away from high-traffic areas, usually quite high up.

We list the yellow sac spider among our selection of the most dangerous creatures in Vietnam. And for good reason. This is one feisty customer with a venom that’s known to cause intense pain in human victims. Some reports even say that a bite from one of these guys could lead, potentially, to death. However, there have so far, thankfully, been no recorded cases of human fatalities as a result of the yellow sac in Vietnam, or anywhere else for that matter.

What you’re looking for is actually a rather small spider. Measuring just a centimeter across at their max growth, these unsuspecting critters come in a light beige-tan color that means they can be pretty tricky to spot. The main defining features are likely to be the long legs at the front and the slightly bolder, more orangey head area. The yellow sacs found in North America might also have blackened feet, but that’s not too common in the ones found across Asia, in countries like Vietnam.

Today, yellow sac spiders are prolific all over the Northern Hemisphere. They’re classed as an Old World species, which means that they aren’t native to the Americas. However, they have since been imported to that part of the world. The original range where they spread was actually from the fringes of Europe to Japan and China in the Far East, Vietnam included.

Some call the Vietnamese tarantula the Vietnamese tiger. We can see why. They are a feisty, confident species that’s never scared to confront a threat head on. They’ve also got the muscle to back up all that moxie. Yep, you’re looking at an arachnid that hits a whopping 18cm from end to end in some cases. Plus, they come with beefy legs that can be up to a centimeter wide. It’s not an encounter any arachnophobe will want during their trip to the rice paddies and peaks of Nam’.

Talking of rice paddies…that’s the favored habitat of this hairy customer. They love to burrow deep holes in thickets of old rice grass and swamp grass, hiding under the vegetation in lairs ready to pounce on unsuspecting victims. It’s for that reason that they’re considered a bit of a plague among rural Vietnamese farm workers, who’ll often encounter one or two per week on their daily rounds.

Vietnamese tarantulas are also sometimes known as the Asian blue smokey tarantula or the Vietnamese blue tarantula. That’s on account of the strange blue-grey hue that some individuals take on, no doubt to help them stay hidden among the muddy undergrowth in the backcountry.

Famously aggressive, the Chilobrachys dyscolus won’t hesitate to come out to attack. The good news is that no tarantulas possess a venom like the black widow that’s capable of causing nervous system failure and whatnot. Instead, the threat from these guys is mainly from the physical effects of a bite – local swelling, pain at the site of contact with the fangs – and irritation from hairs that become lodged in the skin. Still, that doesn’t stop some local cooks from brewing up a soup from them!

The most common spiders in Vietnam – our conclusion

This guide highlights just a handful of some of the most common spiders in Vietnam. Really, though, it’s just scratching the surface. There are oodles and oodles more eight-legged arachnids to be spotted in this corner of the world, along with a whole bunch of very common house spiders – you know, the sort you’re used to seeing back at home! Here, we’ve focused on a few of the more intriguing species, from those big, crab-eating huntsman spiders to the hairy Vietnamese tarantula that no one wants to meet.