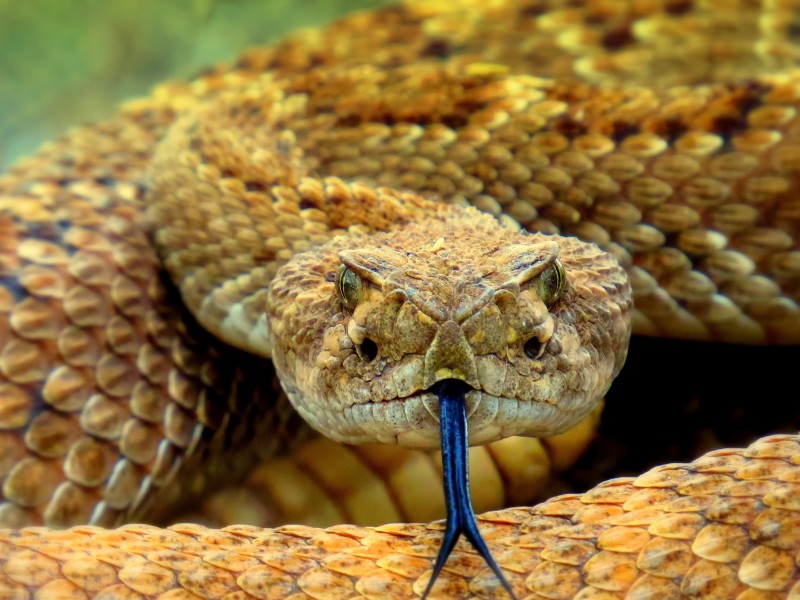 The 5 Most Venomous Snakes In Lebanon To Know About

Yep, our guide to the venomous snakes in Lebanon scours the whole of the nation, from the rising mountains and their seas of cedar forests to the rolling coastal plains and their fragrant citrus orchards. The aim? To seek out the legless reptiles that we think are the ones you really should know about before touching down.

The good news is that snakebites in Lebanon are relatively rare. Big Asian tourist draws like Sri Lanka and India have much more sobering stats on this front. However, venture to the rural regions of the Lebanese highlands and the hotter southern reaches of the country, and snakes do become more of an issue. So, let’s take a closer look at the ones you should know about…

Some call the Lebanon viper the Bornmueller’s viper, but we’ll stick with its geographical moniker for the purposes of this guide because it sums up the spread of this uber-endangered and rare snake. Basically, there are only about three or four pockets of territory where the species is found. They all dot the mountains of southern Lebanon and the highlands of Syria and Israel just across the border. It’s not for nothing that the species is now listed as endangered by the IUCN!

Those who do go searching for the critter should be on the lookout for a 70-90cm animal that has a dark grey and brownish coloring the whole way along the body. Some specimens have patterns while others are monochrome. The males tend to be slightly larger than the females.

Naturally, these guys are venomous. We say that because every single viper species on the planet is venomous. Thing is, no one has had a chance to study the Lebanon viper in much detail and they very rarely bite people, mainly because they are so seldom encountered in the wild. So, not much is known about the damage they can do to humans. Still, we’d exercise extreme caution in their presence – you don’t want to be the one to find out what they have behind the fangs!

Although endangered, the blunt-nosed viper can still be found across a huge swathe of the Middle East. In fact, it can be found as far east as the Himalayan foothills of Kashmir in India and Pakistan, and as far west as Algeria and Tunisia in North Africa, although there are officially recognized subspecies in those parts.

The coloring is likely to be the first thing you notice about this snake. They have a light grey backdrop that can sometimes appear to have a blueish tint. Add to that ochre, orange stripes that dash the body from the end of the neck to the tail and you’ve got one gnarly looking serpent. The other thing that stands out is – just as the name suggests – the nose, which is more rounded than other vipers in the region.

Macrovipera lebetina rarely bite people and there have been few recorded instances of envenomation. However, scientists have run tests that show they have the capability to inject high venom yields in a single bite incident. That can lead to organ failure and disrupted cardiovascular systems. AKA – something you’d almost certainly want to avoid on your trip to Lebanon!

Atractaspis engaddensis should strike fear into anyone who crosses its path, even the most seasoned herpetologists out there. We say that because this is one darn strange and unpredictable snake. Its shape means that even experts often can’t tell which end is the head and which is the tail (not a great situation to be in when the head hides fangs armed with a deadly venom – more on that below, though).

One piece of good news is that the Israeli mole viper is pretty distinct looking. Dark, dusky, coal black from end to end, it’s hardly anything like the sand-tinged snakes that often do well in the dusty Levant region. It also sports a uniquely rounded head that immediately sets it apart from true vipers (although it’s in the name, this one is technically a stiletto snake). Specimens rarely grow to anything over 70cm in length.

That’s the looks out of the way. Now, what about the venom? Well…it’s hardly holiday reading.  Isotoxins and unique sarafotoxins combine to make the bite of these bad boys something that could really ruin a trip to the Lebanese coast. Victims will often feel holistic cardiovascular effects, nausea, and loss of muscle control, all of which can lead to swift death thanks to the hefty amount of venom that’s injected in each bite. Not good.

The Palestine viper is actually one of the most feared snakes in the whole of this part of the Levant. It has a range that covers the entire of northern Israel, big portions of the West Bank, the borderlands with Jordan, and – here’s the kicker – EVERYWHERE in Lebanon.

Yep, everywhere you go there’s a potential meeting with the Daboia palaestinae on the cards. It’s this vast geographic distribution that’s helped to elevate the species to one of the deadliest of all – most experts think they are responsible for the highest level of snakebite death in the region.

A member of the viper group, these guys look more like the common asp adders of Europe than the desert vipers found further south in the arid Negev. Take the coloring – it’s a mix of beige, black, grey, and brown, all interspersed with geometric diamond shapes that run the whole way down the back to the tip of the tail. Most won’t grow any larger than 90cm in all at full adulthood.

Palestine viper venom isn’t a nice thing to have pushed into the bloodstream. Scientists have recorded its effects: Unpredictable hemorrhagic activity, slow development of blood clotting, sudden bleeding – the list goes on. And that’s not it. These guys are known to be especially aggressive snakes that rarely shy away from confrontation, meaning attacks aren’t unheard of at all.

Debates rage on as to whether the desert cobra can be found in this northerly corner of the Levant. We’d say the simple possibility of them being around warrants a mention on this list of the most venomous snakes in Lebanon. Why? Well…they are highly venomous, capable of causing death in humans faster than even the feared Indian cobra!

The main geographic range of the Walterinnesia aegyptia is, just as its name implies, to the south of Lebanon proper, in Egypt. There, they live all over the Sinai Peninsula, but also push into portions of Israel and Jordan. Few have ever been documented in Lebanon itself, however there’s the right combo of semi-desert scrubland and highland desert terrain in the south of the country for them to thrive.

The looks of a desert cobra are enough to help you tell them apart from the more common vipers of the Middle East. Check the head – it’s rounded and smaller, true to the style of the elapidae tree of snakes. The coloring is also distinct – it’s a dark graphite grey all the way down the body. Like the vipers before them, however, desert cobras are considered highly aggressive and prone to strike fast when disturbed. They are most active at night.

The most venomous snakes in Lebanon – our conclusion

There are only a handful of venomous snakes in Lebanon that travelers need to worry about, since only a few of the 25 snakes present in the country are capable of doing damage to humans. Some, like the Palestine viper, are pretty common, especially on the hotter and populous coastal plains around Beirut. Others, like the rare Israeli mole viper and the desert cobra are very seldom seen by humans, and some scientists don’t even think that they’re present in the country in very high numbers.

Are there venomous snakes in Lebanon?

Yes, there are at least five venomous snakes in Lebanon. The most common is the Palestine viper, which is though to be responsible for more human snakebite deaths than any other snake in the Levant region. That said, the vast majority of snakes found in Lebanon are non-venomous and pose no threat to travelers at all.

What’s the most dangerous snake in Lebanon?

Statistically, the Palestine viper causes the most snakebite envenomation incidents and deaths in Lebanon. However, that’s really only down to its ubiquity and presence in highly populated areas. The deadliest snake is likely to be the desert cobra. Some scientists don’t think it even lives in Lebanon, however it has a bite that’s more fatal than the infamous Indian cobra!