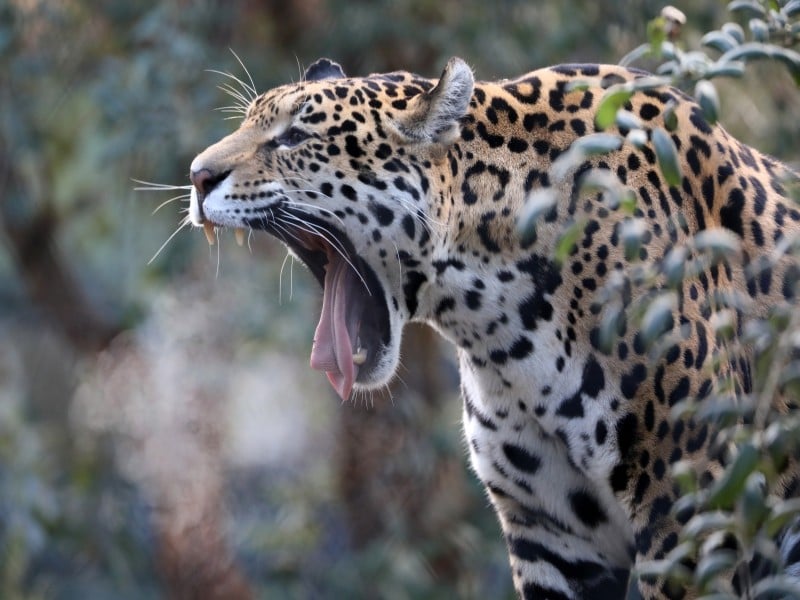 From majestic Islamic architecture to culture-rich cities, from snow-capped mountain peaks to vast deserts, Iran has loads up its sleeve. The country once at the heart of ancient Persia is also known for its incredibly warm-hearted and friendly people and its tasty, earthy cuisine. However, the diverse climate and geography here mean there is no shortage of places that provide a home to many dangerous animals in Iran.

There are high mountains, such as the Zagros, where you might find threatening wild cats. There is also the Maranjab desert, home to many species of scorpions and snakes. Then come the forests, lakes, and seas that provide plenty of hiding places for many animals that are more than capable of seriously hurting their victims.

This guide to dangerous animals in Iran will talk you through seven of most fearsome species you may find in these parts. From highly venomous snakes to poisonous scorpions, large predators such as leopards to saltwater sharks, you will learn which creatures to avoid as you hop from Tehran to the deserts and beyond.

There are nearly 70 species of snakes throughout this western Asian country, and many of them are highly venomous. That makes serpents some of the most dangerous animals in Iran. Every year sees thousands of snake bite incidents, but luckily most of them don’t turn out to be fatal. In fact, there are usually no more than 10 deaths per year here, but that doesn’t mean there’s no need to fear these slithery creatures.

Here are the four most dangerous snakes in Iran:

The second group considered to be among the most dangerous animals in Iran are scorpions. There are over 60 species of these small stingers throughout the country and many of them are venomous. They live across all of Iran, but the most numerous populations of deadly individuals are concentrated around the southern regions of Hormozgan and Khuzestan.

Hemiscorpius lepturus is the one to watch out for the most while traveling around erstwhile Persia. This scorpion is responsible for the majority of scorpion-related deaths in both Iran and Iraq’s southern regions. Children are especially at risk of dying as a result of their venom, but luckily there is a lifesaving antivenom widely available.

Many adults will survive the sting but will have to go through very unpleasant symptoms that include fever, vomiting, nausea, confusion, and inflammation around the wound. The sting doesn’t heal quickly either – it’s usually very painful for a long time.

Hemiscorpius lepturus are usually yellowish-brown. They have flat but wide bodies, which allow them to fit into tight crevices between rocks, where they often dwell. You can distinguish them from other stingers by the tiny hairs that cover their limbs.

The Persian Gulf and the Gulf of Oman border the southern parts of Iran. Both are parts of the Indian Ocean, which means that there is no shortage of marine creatures lurking beneath the surface of the water, including sharks. In fact, there are around 60 species of shark to be found there, and many of them are dangerous.

Unfortunately, all three of the world’s deadliest sharks live in Iranian waters. That means you might encounter the great white, tiger sharks, and bull sharks while swimming in the Persian Gulf. These three species are also the most likely to bite humans, which means their fearsome reputation is well deserved. All often come close to the shore, too, where they might come across humans, but bull sharks are also known to swim in freshwater and brackish rivers.

There have been nearly 30 recorded shark attacks in Iranian waters and many of the incidents happened in the rivers rather than the sea (bull sharks, we’ve got our eye on you!). Out of all the incidents, 13 resulted in death. Luckily, there haven’t been any fatalities since the 1980s, which means the risks today are lower than they once were.

It’s not great news for those suffering from arachnophobia. Iran is home to over 750 species of spiders, and many of them are able to cause harm to humans. The ones to watch out for especially are the eight-legged arachnids that belong to Theridiidae and Sicariidae families, as those are the most dangerous. The former is the more abundant in Iran overall.

The worst species is the fearsome Latrodectus, better known as the true widows. There are at least five varieties of widow spiders that you may find in Iran, and the two worst ones are the Mediterranean black widow (Latrodectus tredecimguttatus) and the redback spider (Latrodectus hasselti), which is also known as the Australian black widow. Both these arachnids are armed with highly poisonous venom that can sometimes result in human fatalities.

Luckily, widow spiders are known for their timid nature, which means they rarely bite people. They only do so when cornered and made to feel that they have no other choice than to bite. You can recognize the Australian variety by their characteristic red stripe visible on their backs. The Mediterranean widows are noticeable by 13 spots visible on their otherwise black backs.

One of the highest risks for people in more densely populated areas of Iran is stray dogs. It’s estimated that there are about two million homeless canines across the country, which means that it’s not uncommon to come across them no matter where you plan on visiting. What many of us consider to be human’s best friend, unfortunately, may be one of the most dangerous animals in Iran because of the fact that many of the dogs here are infected with rabies and other diseases.

Rabies is a deadly disease that can be transmitted to people from an infected animal through a bite. It’s a very serious viral infection that affects the brain and the nervous system and usually ends in fatality if left untreated. It’s not only transmitted by dogs, though. Other animals such as cats, bats, foxes, and monkeys can also pass on the ailment.

While in Iran, it’s best to avoid contact with stray dogs altogether to minimize the risk. If you do get bitten, you should seek medical advice as soon as possible to get a life-saving vaccine. Unfortunately, that might be more of a problem in rural areas far away from the nearest hospitals, which is why it’s worth getting vaccinated before traveling to Iran to increase your chances of recovery. You can recognize rabid dogs by many symptoms of the disease, including excessive drooling, heavy breathing, and inability to close the mouth.

The Persian leopard is another animal native to Iran that is more than capable of seriously injuring and killing people. It’s a wild cat from the leopard family, also known by its scientific name, Panthera pardus tulliana. This beautiful but frightening creature lives throughout forested and mountainous regions of the country, but they’re more abundant in the south.

You shouldn’t have much trouble distinguishing leopards from other wild cats, thanks to the characteristic rosettes that cover their bodies. They also have smaller spots on their heads and neck. The Persian species have usually got greyish or slightly reddish fur, but there are also paler and darker individuals around. They usually weigh up to 60 kilograms and measure around 160cm across.

Persian leopards, like all wild cats, are carnivorous animals that hunt for their prey. In Iran, those are usually goats and other relatively sizable mammals. Although they don’t often attack people, incidents are not unheard of, and some have resulted in death. The most recent leopard attack in Iran happened in the Mazandaran region, where the animal injured a policeman.

Next up: The Indian wolf. This one belongs to the family of grey wolves that live across the Indian subcontinent, parts of southeast and west Asia, including Persia. They’re hunting species, which have a history of targeting children as prey. So, it’s no surprise that coming across one might strike fear into your heart.

Indian wolves are relatively similar to the Eurasian variety, but they are not quite as big. Also, because they live in a warmer climate than their European counterparts, they have shorter hair with hardly any undercoat. Their colors range from greyish red to slightly reddish white. They usually weigh no more than 25 kilograms and measure up to around 145cm from nose to tail.

The last known victim of Indian wolves in Iran was a homeless man attacked by a pack of them in the northeastern village of Vali Asr in January 2005. That said, it is people that pose more threat to them than they to us. Wolves have suffered major habitat loss in the 20th century, which also results in the loss of prey. They have also been victims of poachers.

Dangerous animals in Iran – the conclusion.

What are the most dangerous animals in Iran? The list is pretty long, since this country is home to many deadly species that are capable of injuring people. Snakes and scorpions are the most likely animals that could cause serious harm to humans in the wilderness. Also, the country struggles with large numbers of stray dogs, many of which carry rabies. There are also plenty of larger predators, such as leopards, wolves, and sharks, but most are not as abundant as they once were.